Man’s Victorious Marathon in the Face of Terminal Cancer

When Iram Leon, 32, was diagnosed with terminal brain cancer in November of 2010, doctors gave him a laundry list of things he couldn’t do. 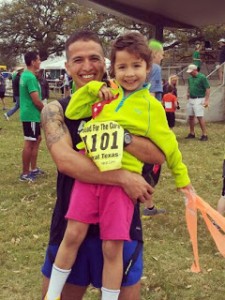 But he could still run.

And he did. But he didn’t do it alone. Knowing he was facing a somewhat uncertain future, Leon’s focus was on family. Leon told the Huffington Post, “the one thing I’m not going to say on my deathbed is, ‘I wish I spent more time with my kid.'”

Leon made sure to avoid that regret.

He ran track from elementary school all the way through high school. He ran cross country in college. He even, at one point, clocked one run after another 1,000 days in a row. Three years ago, he ran his first marathon. He’s now completed seven. Leon has been a runner his whole life, but he noted in his blog:

“It wasn’t until I got cancer that I started sharing [running] with Kiana.”

When he would go for a run, Leon would push his daughter, Kiana, who was just four at the time of his diagnosis, in a stroller in front of him. On Friday, March 8, 2013, at the age of six, Kiana led the way across the finish line at the Gusher Marathon in Beaumont, Texas. Leon was right behind her.

Over two years after they began this journey, father and daughter conquered 26.2 miles together for the first time ever, crossing the finish line together at the three hour, seven minute marker.

By then, it’s likely they’ll have crossed many more finish lines together; not as this victorious tandem team, one in front of the other, but in unison, they’ll greet victory side by side.