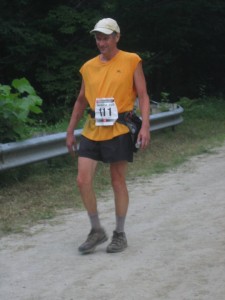 After 100 ultra-marathons, Joe Hayes has carved his niche in the running world. Ultra-marathons are races longer than the standard marathon length of 26.2 miles. Typical races include 50 miles or 100 miles. Hayes spent time with ATLX reflecting on how running has shaped his life, how he has remained essentially injury free for over 40 years and why he started in the first place.

In the early 1960s, President Kennedy made a challenge to Americans similar to Michelle Obama’s Let’s Move Campaign. Kennedy addressed the nation and challenged everyone to hike 50 miles that year. Hayes was a Boy Scout at the time, and although he didn’t pursue that hike then, something about JFK’s message stuck with him.

Working as a nurse anesthetist 10 years after Kennedy’s challenge, Hayes saw a lot of overweight and unhealthy people on the operating table. “I didn’t want that for my life, and I knew an unhealthy, unfit father wasn’t a good role model for my daughter,” Hayes said.

Vices like smoking made Hayes’ first attempt at training more difficult than he expected. “I made it about half a mile around the track before coughing up my lungs,” Hayes said. But he kept after it and soon quit smoking during a time when anti-smoking messages were not yet the norm.

Running became an integral part of Hayes’ life. He cites a quote from Johnny Cash to personify his appetite for running: “You come away with a different point of view.” And that’s exactly what happened with running. His new hobby suddenly became a lifestyle, and his outlook changed. “Throughout culture people have tried to alter their consciousness and see things in a new way through running or yoga,” Hayes said. “That came through to me with endurance exercise. It’s been good to me. I’ve been jogging five to 10 miles a day for 40 years now.”

He credits the endurance running movement to a group of runners in the 70s. “There were little enclaves of distance runners who had left the road and hit the trails,” Hayes said. “These people were my heroes. That whole movement has flourished to this day.”

Hayes also credits trail runners for keeping him injury-free for so many years. “Always run on trails when you can” is Hayes’ mantra. Of course, since Hayes runs to and from work every day, he can’t always follow his own rule, but when he has the choice he sticks to trails. “People pay all of this money for running shoes and then run on hard, hard cement. I don’t understand that,” Hayes said. “The different foot strike of the trails has helped me to avoid injuries.”

For an ultra-marathon runner for over 40 years, Hayes’ perspective about running has changed over the years. “In my 60s I just want to stay in the game. It’s really a thrill to just get up, go out and run 10 miles,” he said. “In my youth, competition was important, I would race a little more and perhaps that has diminished.” Now during an ultra-marathon, Hayes focuses more on himself during the race than perhaps the competition, but there is still a bit of a competitive edge still there. “Even though I’m thinking more about my body during 50 or more miles and making sure I’ve had enough water and everything feels good, I still will see the person in front of me and want to catch them as well as keep anyone behind me behind me.”

When a person runs for that length of time, there is certainly a lot of time to think. Many runners take one or two roads. Some disassociate themselves from the run and do things like math problems or sort out an issue with work or family. Others stay focused on the run itself by focusing on their bodies. Am I feeling okay? Where am I at? Am I getting enough water? Hayes does both. “I make sure my body is okay, but there is still a therapeutic level to ultra-marathons. Sometimes you can resolve life issues during the run. You get to the finish line and have a big revelation.”

For a list of Joe Hayes’ ultra-marathon races visit here.