As DePaul University law student Cory Harris prepares for the Boston Marathon on Monday, he recounts where he’s been. The road he’s traveled to this point has been a long and challenging one – not even counting the 984 miles between Chicago and Beantown.

Harris, one of triplet brothers and nine children altogether, is inherently competitive and has been an athlete his whole life. The high school cross-country and track and field star carried his love for running with him to college, tackling his first marathon on June 22, 2009, as a junior undergraduate student at Marquette University. “I was by far in the best shape of my life,” Harris remembered as he recalled those first official 26.2 miles. But that was all about to change.

On his way home from college, traveling alone down an expressway near Mukwonago, Wis., during a wind advisory, Harris’ life changed forever. “The semi was going nearly 70 mph down a hill when high winds swung its trailer into my lane and hit me on the driver side,” Harris said. The car did several 360s before skidding to a stop. 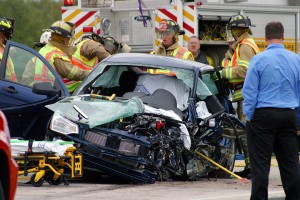 The impact forced the entire engine down onto Harris’ left leg. His tibia and fibula snapped into two instantly.

Harris suffered compartment syndrome, a post-injury limb- and life-threatening condition caused by a lack of blood, resulting in vast nerve damage. His left forearm sustained an open fracture of the ulna, and his wrist split into two.

“My entire left side was a mess,” Harris said.

Seven and a half hours of emergency trauma surgery meant he would keep his leg. “30 minutes later and I would have lost it completely,” Harris said, quoting his surgeon. Over the course of two weeks and five invasive operations, his body was rebuilt. 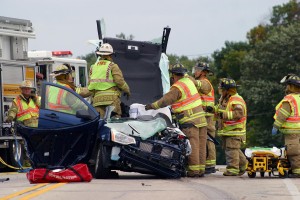 Doctors removed his fibula completely, replacing it with a steel rod and screws at the ankle and knee. They secured a plate in his forearm, placing screws and pins in his wrist to piece it back together. Throughout that process – procedures to address the compartment syndrome – skin grafts and various other operations, Harris lost 25 pounds.

“It didn’t really set in until my physical therapist told me to stand up,” Harris remembered. “I couldn’t put any pressure whatsoever on my leg and began crying instantly. That was the moment the severity of my injury set in.” Doctors broke the heartbreaking news to the 21-year-old: he would never walk without a limp. He would never run.

“Being told you can never do something gives you all the more drive to prove everyone wrong,” Harris said, while standing on two feet, less than four years later, qualified and ready to take on the Boston Marathon.

“I constantly pushed myself… all odds were against me. I was never supposed to run again.”

Harris spent hours every day in physical therapy to regain movement in his ankle, which was operating at 15 percent of the standard range of motion. “I had to mentally teach myself how to walk again,” Harris said. “Thereafter, I had to teach myself to run again. That was the most difficult part.” 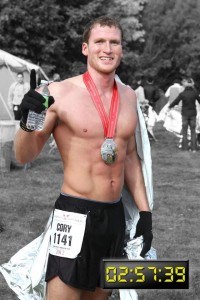 Against all odds, Harris did run again. With the constant support of his family and loved ones, he took his first steps around Thanksgiving of 2009, ran his first 200 meters in January of 2010 and ran his first 5k on May 8 of that year – a race he won, crossing the finish line at 20:27.

He’s raced over 20 5ks since his accident.

Harris conquered his favorite race to date, the Milwaukee Lakefront Marathon, to qualify for Boston. “It was not only the most challenging, but it was the most rewarding as well. The feeling was unbelievable,” Harris said. “My entire family was there, waiting for me at the finish line… It was an emotional day. Everything I went through to get there paid off.”

On Monday, Harris will race in the 117th Boston Marathon, one of the most respected and prestigious events of its kind and the world’s oldest annual marathon. His time goal of between a 2:40 and 2:45 is ambitious, but Harris says that’s how he likes to be. His best run in training so far? Fifteen miles in 90 minutes. 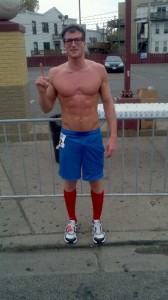 As he prepares for the race, Harris admits to nerves over the infamous Heartbreak Hill, the ascent spanning 600 meters between the 20th and 21st mile near Boston College where a runner’s glycogen stores near depletion. He isn’t afraid of hitting a wall, citing his size and strength as his X-factors. “I weight train a lot, and I’m 6’2”, 190 pounds,” Harris said. “Not the size of your typical marathon runner.”

While some competitors will be using distraction methods to push through Heartbreak Hill, like iPods strapped to their arms and headphones in their ears, Harris approaches race motivation a little differently. “I actually don’t own an iPod,” Harris said. “I typically don’t run with any music. I just think of my family, my accident and just drive myself to get better every time I run.”

Progressively getting better is an art Harris has mastered. From a life-changing car accident, to teaching himself to walk and run again from scratch at the age of 21, to running countless 5ks and now preparing for the Boston Marathon, Harris is on an upward trend.

Looking back at his first marathon, Harris acknowledged how far he’s come to get to Boston. He joked,

“At my first marathon [in 2009], I innocently asked a few marathoners next to me before the race, ‘Which mile do you put your kick in?’ They both looked at me, began laughing and said you’ll find out. Needless to say, there is no such thing as a kick in a marathon.”

But that’s not the only message Harris took away from his experience. The most important lesson he learned was to be positive, genuinely seek happiness, live in the moment and, of course, he emphasized, call his mom every morning. “Life is a crazy unpredictable roller coaster ride,” Harris said.

“As you grow older, you begin to appreciate that you never really know what tomorrow will be. I thought September 28th, 2009 was going to be a normal day, and by the end I was not able to even do something as small as walk.”