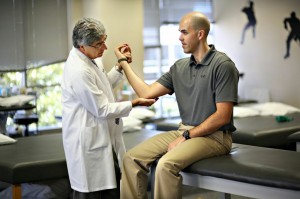 When you hear about a professional athlete undergoing surgery, chances are good that they were treated at Kerlan-Jobe Orthopaedic Clinic in Los Angeles, Calif., or by a former Kerlan-Jobe fellow. Kerlan-Jobe has become synonymous with sports medicine since its founders Dr. Robert K. Kerlan and Dr. Frank W. Jobe pioneered the field and continually reinvent it through their research and fellowship programs.

Kerlan-Jobe is best known for its work with professional athletes, but in reality it’s just a small percentage of the clientele Kerlan-Jobe hosts.

What you hear about in the press is the extensive list of professional athletes that come to Kerlan-Jobe, but it’s really a small percentage of what they do. The doctors at Kerlan-Jobe repetitively hear, “I can’t believe I’m being treated at Kerlan-Jobe,” but that’s what their practice is really about: treating everyday athletes. There is no referral required, and they accept many insurance plans. Everyday athletes receive the same level of care that professional athletes and celebrities receive.

The staff at Kerlan-Jobe are also conscientious about labeling the clinic in any certain way. They aren’t a celebrity sports clinic, and they are even careful about using the term “athletes.” You don’t have to get injured in a triathlon to be seen by one of the doctors at Kerlan-Jobe. Many of their clients work for the LAPD and LAFD and were injured in the line of duty or in another job related injury. The same procedures are used to treat all patients regardless of who they are or why they were injured.

Sometimes people expect the same results as the professional athletes, and part of the doctor’s job is managing expectations.

“I’m probably going to receive a few phone calls wondering why they can’t recover from knee surgery and be back in action in 12 days,” said Dr. Ralph Gambardella, the chairman and president of the Kerlan-Jobe Clinic.

What Dr. Gambardella is most likely referring to are stories in the sports press touting how fast superstar athletes get back on the field. What most people don’t realize is that these athletes dedicate their lives to athletics and prepare their bodies that way.They can recover quicker, because his or her body is in better shape and they can spend 24 hours a day in physical therapy if they choose. Athletes don’t recover quicker because they have money or receive better care, they just typically are in better health and have more time to dedicate to their recovery than an everyday athlete.

The original plan for the clinic wasn’t to treat the top professional sports stars. Dr. Kerlan began his practice through his affinity for horse racing, leading him to treat the jockeys at the track. Eventually, he became the physician for the Los Angeles Dodgers when they moved from Brooklyn. With his overwhelming workload, Dr. Kerlan asked Dr. Jobe to assist in his work. The two then built a sports medicine empire. 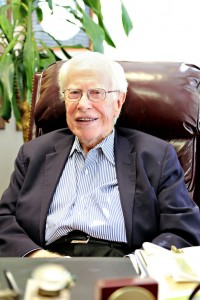 Although many solutions to the problems athletes face have been discovered at Kerlan-Jobe, probably the most notable is Tommy John surgery, which was first performed by Dr. Jobe in 1974. Tommy John tore the tendon in his elbow while pitching for the Dodgers. At the time, this injury was career ending, but John was willing to take a risk if Dr. Jobe could find a way to save John’s throwing arm. The surgery was a success, and not only did John come back better than before, the surgery has saved countless pitchers’ careers as well.

Dr. Jobe has passed down his knowledge and innovation through their world renowned fellowship program. Alumni of the fellowship program can be found all over the globe assisting everyday athletes, as well as professional sports teams.

One astounding statistic about the clinic is that half of the sports doctors for professional teams in the U.S. are once Kerlan-Jobe Fellows.

So what makes Kerlan-Jobe Fellows so successful? Dr. Gambardella attributes that success to a number of things. Kerlan-Jobe fosters a learning environment, where the doctors on staff contribute extensive amounts of time to teaching the fellows. The success can also be attributed to pure desire to work in the field of sports medicine. The fellowship program is an added program after the doctors are board eligible surgeons. Instead of going straight into practice, these doctors spend their fellowship program focusing strictly on sports medicine, which includes clinical practice and research. A large contribution to the continued success of the fellowship alumni can be contributed to the doctors themselves, who come in with extensive and impressive resumes and continue their dedication in their fellowship to become the best in their field.

The practice is all about innovation and creation of new and better techniques to offer solutions to professional athletes, everyday athletes and everyone in between. “You can’t bottle what these guys do,” said Woody Runner, the CEO of Kerlan-Jobe.

“Dr. Kerlan and Dr. Jobe invented the field of sports medicine and then continue to reinvent it every day and make it available to the general public.”

Pioneering medicine thrives through their willingness to work together as a team. The 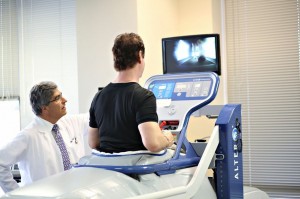 fellowship programs also help Kerlan-Jobe to stay at the forefront of what is happening in the orthopedic arena, from biomechanical research to sports neurology.

Although the doctors at the clinic stay extremely busy teaching fellows, seeing patients, and doing research. Kerlan-Jobe participates in community service through its Foundation. For instance, as part of a program run by Team HEAL, the clinic volunteers its facility and its doctors to provide preseason physicals for underserved high schools in the Los Angeles area.