Lawmakers and lobbyists face off at charity hockey game 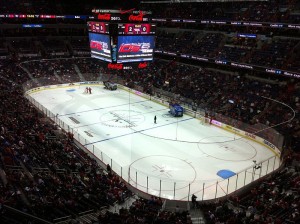 On April 27, government officials will step off Capitol Hill and onto the ice for the fifth annual Congressional Hockey Challenge, which benefits the Thurgood Marshall Scholarship Fund and the Fort Dupont Ice Hockey Club. The game will pit some of the most influential people in Washington, D.C. against each other: lawmakers and lobbyists.

Washington, D.C. boasts quite a few passionate recreational hockey players who also happen to work on Capitol Hill, including Nick Lewis, a lobbyist for UPS. When Lewis and a few of his “ice-mates” came up with the idea for the game, it was simply to have a little fun and to help out a charity that was near and dear to them. “A number of us decided to explore whether we could have a charity hockey game involving Congress somehow,” Lewis told ATLX.

The first event took place in 2009 and raised more than $36,000 for the Fort Dupont Ice Hockey Club, a place where Lewis and his friends and co-workers inhabited frequently. Coincidentally, and unbeknownst to the charity game’s inaugural participants, the Fort Dupont Hockey Arena is also home to the oldest NHL-sponsored inner city youth development hockey program in North America.

In addition, the Fort Dupont Hockey Club is one of the original clubs for the NHL’s Hockey is for Everyone (HIFE) initiative, which expands access to ice hockey and the appeal of the sport to inner-city youth.

“My phone rings one day, and it’s the National Hockey League,” Lewis said.

The NHL wanted to know how they could get involved, including offering celebrity coaches and anything else that could help make the event an even bigger success.

There aren’t tryouts for either teams, but there are rules to be eligible. For the lawmakers, elected officials get first dibs. Five members of Congress will play this year. The rest of the spots are filled with other federal government officials. Essentially, the rule is you have to have a .gov at the end of your e-mail address to be eligible to play. And there is a waiting list.

For the lobbyists team, the player has to be a federal lobbyist must help raise money to support the event. 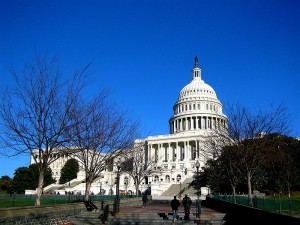 One could imagine the tension that builds between these two groups, but the games are always friendly. Everyone knows that on Monday they will have to return to their real job, so you’re not going to see anyone dropping the gloves and throwing punches.

However, players are still competitive and certainly want to win. The skill levels of the players vary. Some played division one hockey in college and are still pretty talented on the ice, while others picked it up later in life and enjoy the fun and fitness aspects of the sport. “You’re not going to see anyone out there who is a contender for the Olympic team,” Lewis joked.

“I don’t think the NHL is looking to the Congressional Hockey Game to find its next Hart Trophy winner.”

This year, the event will help send two students to any four-year college in the U.S. or Canada and continues to support the Fort Dupont Ice Hockey Club. The game will be held at the Verizon Center, where the Washington Capitals will play the Boston Bruins that very night. The players will wear “Boston Strong” stickers on their helmets to support the people of Boston in light of the recent bombing tragedy.

When asked what the main thing he wanted people to take away from the event, Lewis stated, “I think it’s really important to note that 100 percent of the proceeds goes to the charities we support. There is no pass through, and every single penny goes directly to the charities.” Lewis stressed how great the NHL has been contributing the event, as well as the players themselves. “Despite what you may think, these are very busy people. I know Congress generally has a low approval rating, but I can’t say enough individually about the members who are involved in this. They are just very dedicated people who believe in the event and have embraced it and are very generous for giving their time and making it a lot of fun.”