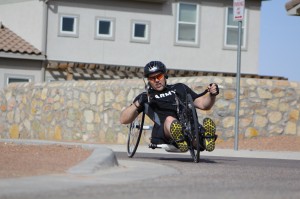 Lt. Colonel Danny Dudek didn’t realize that July 19, 2007, would be the day his life would change forever. While traveling with another solider, an explosively formed penetrator (EFP) struck the back of their vehicle. Dudek remembers falling, but he doesn’t remember feeling much pain. But the lack of pain was not a good sign. He had suffered a spinal cord injury that would leave him paralyzed from the knees down.

Fortunately, a doctor was nearby. Although they couldn’t save the other passenger, Dudek was life-flighted and in surgery within an hour.

“I’m lucky to have survived an EFP,” Dudek said. “That’s pretty much unheard of.”

Six months after the injury, Dudek discovered apparatuses to help him play golf. Golf led to skiing and skiing led to kayaking. Before he knew it, he was living an active lifestyle that didn’t exist for him before his injury.

He then set out on an ambitious handcycling ride from Seattle to Portland. Over 200 miles later, he was reinvented. He was no longer a disabled veteran, he was an athlete.

Dudek will be one of more than 200 athletes competing in the Warrior Games, set to take place in Colorado Springs, Colo., May 11-15. The Warrior Games is a Paralympic-style event for transitioning veterans. Each branch of the U.S. military takes part. This year, the British military will also formally participate for the first time, and Prince Harry will be on hand to cheer on his country’s crew.

The Warrior Games was developed not to pit athletes against each other, but to promote physical activity for the disabled. A large majority of the disabled population live a sedentary lifestyle, leading to an increased risk of diabetes, depression and obesity. By raising awareness, Dudek hopes to encourage other people who are disabled to get out and exercise.

“Sport is the spark,” Dudek said. “To the people who are sitting at home and thinking they can’t do it because they are disabled, all of the obstacles they see are illusions.”

This will be Dudek’s second year at the Warrior Games. Last year, he won six gold medals in swimming events. But he didn’t fare as well in his cycling race.

“I hate to say it, but last year the race beat me,” Dudek said.

To prepare for this year’s handcycling race, he has been training on weekends, riding anywhere from 12-20 miles per trip. 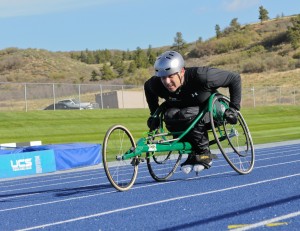 Adaptive-sport athletes face a number of challenges. They have a limited amount of facilities and resources available for training. Athletes are also spread across the country, so it’s difficult to train as a team. Lastly, competitors are often newly injured and are in a transitional phase.

“No one is really doing research on training for someone with a spinal cord injury,” Dudek said. “How far can they push themselves? No one really knows … America has not fully embraced adaptive sport yet.”

Although the Warrior Games’ main purpose is to help the disabled live an active lifestyle and to raise awareness for adaptive sport, it’s still incredibly competitive, but in a unique and special way.

Each branch of the military competes against each other, but they also cheer each other on. And not just at the Warrior Games, but throughout the entire year. They follow each other on Twitter, they keep up to date about what other athletes are doing, and, most importantly, they always support each other. The whole culture of disabled sport serves to inspire every day.

For more information about the Warrior Games visit  http://www.WTC.army.mil

2013-05-09
atlx
Share !
Previous: Get Fit and Make a Difference at the Tour of Long Beach
Next: Five Fun Ways to Get Fit Before Memorial Day