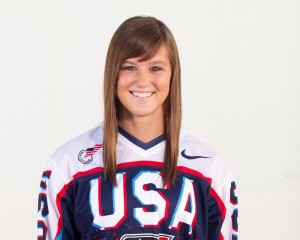 Alise Post recently placed a sticker on the front plate of her BMX bike. The four words on that sticker mean a lot to her.

One of the best times to read the sticker will be when she’s at the starting gate at the USA Cycling Elite BMX National Championships in Chula Vista, Calif., on Saturday. Why? Because that will be one of the few moments the 22-year-old will be sitting still long enough for you to get a glimpse at it. As soon as Post blasts out of the gate, she’ll be a blur, reaching speeds of up to 35-40 mph.

Post has seemingly been in motion ever since she was six. That’s how old the St. Could, Minn., native was when she first rode a BMX bike. Her older brother Nick, a BMX racer himself, thought it would be a good way to spend time with his little sister. But Post was not sold on the idea as she cowered at the top of the hill.

“I wouldn’t do it,” Post said. “The hill was too big, which is ironic because the hills we start on now are two stories tall. But at the time, the little dirt hill you start on seemed way too big and scary. I turned around and said, ‘Nah uh, not happening.'”

Post’s mother Cheryl urged her to give it one more try.

“We went back out there, and I got my first little crash out of the way and realized that it wasn’t so bad and the rest is history,” Post said.

Since then, Post went on to win back-to-back USA Cycling National Championship titles in 2011 and 2012.

Post has always been an athlete. When she was younger, she also competed in gymnastics and track and even held the triple jump record concurrently with her father, Mark at the same high school at one point.

As she got older, she began to realize what she could accomplish if she focused on one sport alone. Her dream was to go to the Olympics, but BMX racing wasn’t a medal sport at the time, so gymnastics seemed to be the way to go. When it was announced that BMX racing would make its debut at the 2008 Beijing Olympics, Post knew that was where her heart was.

“That wasn’t something I wanted to miss out on,” she said. “I decided to drop the other stuff.”

Post’s complete commitment to BMX racing would pay off in 2012 when she became a member of Team USA at the London Olympics.

In terms of her training, Post says it’s like being a 200-meter sprinter in track, because you need to be explosive at the start. If you aren’t out in front right away in BMX racing, you can’t control the race. Her workouts include high intensity training with heavy weights, bike sprints and practicing skills on the track. Post typically has two training sessions per day, plus recovery sessions and recovery massages.

“It’s a full-time job. You’re doing it all day,” Post said. “It’s a lifestyle. It’s not like I can hang up my bike at five and then be done for the day. The things I do at night will affect my training tomorrow … your body is your job.”

To that end, Post began following a stricter diet when she started to train with her coach Sean Dwight. With a better diet, her results improved exponentially, and she experienced more consistency in her rides. 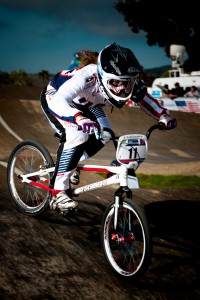 Unfortunately, Post also dealt with back-to-back injuries that left her in recovery for more than five months. First, she hurt her ankle, and not long after that, she suffered a knee injury. In her sport, injuries are common, but it was frustrating for her to be on her way up only to face setbacks. But that’s what motivated her to get better and get back out there.

“It will hurt worse emotionally if you give up,” Post said. “Emotional stuff hurts a lot worse than physical stuff.”

Post attributes her success to her coach, her boyfriend Sam Willoughby, an Australian BMX racer and fellow Olympian, and, most importantly, her family, especially her mother.

“I’ve had to be really strong, especially with the injuries I’ve sustained,” Post said. “But I’m only half as strong as the lady who taught me.”

On April 25, Post’s mother was diagnosed with stage four melanoma. The diagnosis came right before Post was scheduled to race in North Carolina on Mother’s Day. It was a difficult time for Post, but her mother has a motto that inspired her to stay strong, so she could compete in North Carolina.

And what is her mother’s motto? It’s the same four words on that sticker on Post’s bike: “Never ever give up.”