Top Strength & Conditioning Coaches in the Country: The CSCCa The Collegiate Strength & Conditioning Coaches Association (CSCCa), formed in 2000 by a group of 23 committed professionals led by Dr. Chuck Stiggins, has grown to become one of the most respected and significant organizations in sports. Built to support, recognize and cultivate the crucial role of the strength and conditioning coach, the CSCCa fosters the sharing of knowledge and experience among the top strength and conditioning coaches in the country.

Now, 13 years later, the CSCCa has grown to over 1000 members – a long way from its humble but purposeful beginnings.  Founder, Executive Director and the organization’s first President, Dr. Chuck Stiggins, established the CSCCa with three goals in mind: to promote education, unity and respect for and among the collegiate strength and conditioning coach. The CSCCa mission statement was formed on that foundation:

“As an organization of distinction, consisting of the world’s leading strength & conditioning professionals, we promote education, unity, and respect for all strength and conditioning coaches of collegiate and professional athletic programs by establishing standards of excellence for coaches that teach athletes how to maximize athletic performance through safe and effective exercise prescription and by certifying coaches that meet those standards.”

The CSCCa has fulfilled that mission. Over the years, it has become exactly what it set out to be. Those accomplishments are due, in no small part, to Dr. Stiggins. Serving 28 years as the head strength and conditioning coach and a professor at Brigham Young University, Dr. Stiggins is a seasoned veteran in his field. During his time at BYU, all 21 of the school’s athletic programs saw unprecedented success.

The necessity for great strength and conditioning coaches was evident to Dr. Stiggins early on.

Dr. Stiggins knew that these great coaches were out there, and he brought them together. Then, they upped the ante. That’s where the Master Coaches came in.

“Our Master Strength & Conditioning Coaches are the best in the world in exercise prescription,” Dr. Stiggins notes. “These coaches have the knowledge, skills, techniques, expertise and experience… they’re the best in the business.”

The CSCCa Master Coach is recognition held for only the elite of the elite among the strength and conditioning ranks. The Master Coach designation (MSCC) belongs to only a small cadre of CSCCa members. Master Coaches represent proficiency, experience, and longevity in the field.  Dr. Stiggins was among the first coaches receive the MSCC honor. 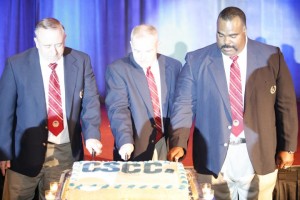 With the help and guidance of the Master Coaches, the CSCCa is a place where the cream of the coaching crop can share knowledge and philosophies to expand and evolve the job of the strength and conditioning coach. The wealth of experience among the country’s best coaches is shared and passed down to the next generation of coaches.

One of the most important missions of the organization is staying educated and keeping up with the latest developments in the field. Now the standard in strength and conditioning education and certification, the CSCCa is cultivating the best of the future of the industry. The CSCCa’s coaching certification, SCCC (Strength & Conditioning Coach Certified), is the most comprehensive designation of its kind.

Through their SCCC and MSCC designations, the CSCCa’s coaches have made their way to the forefront of strength and conditioning. Dr. Stiggins credits the success of the organization to its members.

“The thing that I love so much about the CSCCa is that all of our coaches are two things,” Stiggins said. “They’re professionals – they understand the science of what we do and they know how to apply that science in a simple and practical manner – … and they all have great character. They want to help and serve others, they love their athletes, they put their athletes first, and every place they go, they make the soil richer than they found it.” 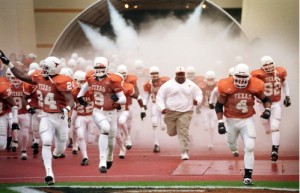 Current CSCCa President, Jeff Madden, who is also Assistant Athletic Director of Strength & Conditioning at The University of Texas, says the CSCCa will continue to go onward and upward. “The future of the CSCCa is very bright. We’re working together, our groups are growing and we’re all excited about it,” Madden says. His goal is clear cut: “To make sure [I’m] guiding everything to try to help us go in the right direction so we can get the respect and be the best that we possibly can be in strength and conditioning.”

Coach Madden, one of the founding members of the CSCCa and part of the inaugural class of Master Coaches, works closely with Dr. Stiggins to ensure the mission of the organization is fulfilled. The expansion of the profession as a whole is the priority.

“We all try to learn from each other and try to find the best way to help our athletes become the best they can be so they can win championships,” Madden added.

In its 13th year, the CSCCa has is accomplishing just that. CSCCa coaches are putting their athletes first, preventing injuries, enhancing performance, and promoting hard work, athleticism and excellence. In 2009, its founder was officially recognized as a legend in the field. Now, in 2013, the CSCCa is following in Dr. Stiggins’ legendary footsteps.

Check out our ATLX INsiders video series, featuring the coaches of the CSCCa. Grab tips and tricks for everyday athletes and the inside scoop on strength & conditioning.