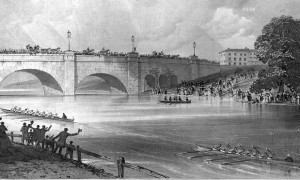 Whether you refer to it as rowing or crew, the sport is one of the oldest competitions in the world. In the United States, the sport is commonly referred to as crew, especially at the high school and collegiate levels.

Archaeologists have discovered old Egyptian carvings of the sport before there was even the written word to describe it.  Rowing was the obvious means of water transportation and some artifacts even suggest that competitors challenged each other in formal competition in the BC era.

In 1715, the first official rowing race commenced on the River Thames in London, England. The wealthy owners of the riverside houses offered generous prizes to the winner in exchange of having their homes be the front row seat for competitions. The tradition has lived on with The Doggett’s Coat and Badge race still held annually starting at the London Bridge and ending in Chelsea.

Americans picked up on this trend by the mid-1700s with the first recorded American boat race held in New York. The sport has continued to grow in the United States, primarily in the collegiate field.  Although not necessarily true- the stereotype of crew being an Ivy League Sport lives on.

In England, rowing entered the collegiate arena in 1829 as the Oxford Crew team beat the Cambridge Crew. These two schools are still competitive and considered rivals still to this day. 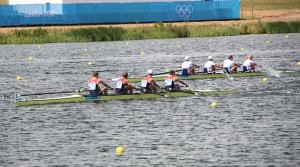 Rowing has been presented at every Olympics for men since the very beginning of the games with the exception of the 1896 Athens games. A bad storm prevented rowers from entering the dangerous seas and the event had to be canceled. It wasn’t until 1976 the women entered the Olympic Arena at the Montreal Games.

Although the sport is one of the oldest in existence, it wasn’t until a few years ago that the length of races were standardized worldwide and set to 2000 meters. Crew distinguishes itself from other sports, as it is truly a team sport. There is no way for one member to (for lack of a better word) showboat therefore members rely heavily on each other, and not one person can be credited for a win.

For more information about the International Federation of Rowing Association  visit their website at http://www.worldrowing.com/fisa.