Is It a Do or a Don’t? Running With Weights 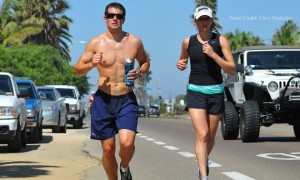 Regardless of which category you fall into, it’s likely that, as an athlete, you work to increase your fitness potential. For a runner, that might involve upping the ante on your regime. When you’re not looking to intervals to build endurance, you look to weights to build strength and muscle. And to burn a few more calories – studies show that adding weights to your cardio can expend 8 percent more energy than without.

So running with weights is a good thing, right?

Well, yes and no.

Running with weights can be a tricky task to tackle, especially when, as an athlete, maintaining health and injury prevention are top priorities. If you don’t load up the right way, adding weights to your daily run can disrupt your joint movement and actually cause more problems than solutions.

As a runner, keep these things in mind when packing on the pounds (the good kind):

Don’t use ankle and wrist weights

Our ankle and wrist joints can’t support this kind of overuse. When walking or running, our bodies are in continuous repetitive motion. The added weight on joints far from the core of our body is going to further the risk for injury to the shoulders, elbows, hips and knees due to overuse and strain.

Furthermore, the biomechanics of the human body are interfered with when additional forces are loaded on the joints of our body that produce the running/walking motion. This increases the level of impact in these joints and the risk for injury.

Try these two methods instead:

The added weight provided in a vest is secured to the core of your body and does not cause extra stress or tension on the joints. It doesn’t interfere with the running form of an athlete and supports repetitive motion to avoid injury from overuse. The vest stays in place, so there’s no excess resistance on the joints in an effort to keep the weight stable.

Not only suitable for running, the weighted vest is applicable throughout an entire training regime with little to no excess strain on the joints.

Like our ATLX Insider CSCCa Master Coach Corliss Fingers from Southern University said, dragging something behind you is a great way to up your speed and strength capacity.

Although it’s intended for sprints and short duration running, it’s better than strapping on wrist and ankle weights in the long-run. The great thing about adding pulled weight to your run is that you can load up the intensity to a high level or you can keep it light and “easy,” if you can even call it that. Dragging weight behind you won’t be simple, regardless of the amount you tack on.

Increasing your strength while running isn’t as easy as strapping on ankle weights and running a quick mile. When you’re looking for a way to build healthy and sustainable strength and muscle as a running athlete, the best methods are revealed in the details. Pay close attention to where you’re reinforcing the excess weight on your body, give your joints a break, and make sure you’re not compromising your body’s natural running motion.