Although Alex Hollanshead has been active all of his life, he never imagined his weekends would consist of 100-mile bike rides or 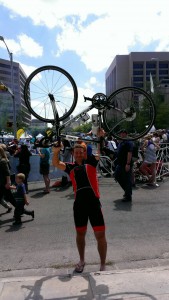 A cross country runner in high school, Hollanshead ran casually while studying biomedical engineering at the University of Cincinnati. He never gave serious thought to running a marathon until a friend bet him that he couldn’t run one under four hours. Challenge accepted. Twelve marathons later, Hollanshead epitomizes the term weekend warrior.

While at UC, Hollanshead also developed a love for biking. It all began because of the parking situation at the Great American Ballpark, the home of the Cincinnati Reds. While working selling beer during Reds games, he became frustrated driving to the stadium and having to park over a mile away. His solution was to buy a bike, so he could get closer to the stadium. His passion for biking was born, and now he rides 200 miles a week.

As a full-time product engineer for FMC Technologies, an oil company in Houston, finding the time to ride and run isn’t easy for Hollanshead. But when something becomes an integral part of your life, it’s easy to add it to your to-do list. “It has become such a routine for me that when I don’t do it, I miss it,” Hollanshead said.

He meets fellow riders and runners at 5 a.m. to train. Since Houston is very flat, they use overpasses for hill work. In the summer, early mornings become a necessity because of the Houston heat. They save long rides for the weekend. Sometimes the goal is to get the miles in, and other times the goal is to simply enjoy the scenery with other riders.

Hollanshead also discovered his riding group is one of the best ways to network. It’s not uncommon to start a conversation with a fellow rider and end the ride as friends with some of the most powerful people in his industry, offering yet another good reason to find the time to ride.

With his increasing workload and travel schedule, it does get difficult to get the workouts in. “I have bad days,” Hollanshead admitted. To stay motivated, he always thinks about a quote he read in the book “The Winner’s Manual” by Jim Tressel,

“On your worst days be good, on your best days be great. And on every other day, get better.”

Having a sense of accomplishment is another motivating factor. “Even though you’re mentally and physically exhausted, you look 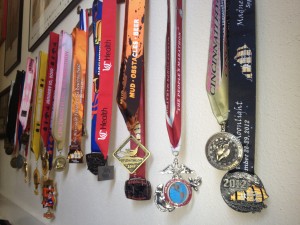 back and say, ‘Holy cow, I just ran 26.2 miles,’” Hollanshead said. “You’re not only motivated for yourself, but you want others to experience it as well… It’s infectious.”

Medals also adorn one of his bedroom walls. He wakes up seeing what he has accomplished, and it inspires him to do more.

In addition, Hollanshead set goals for himself. After his first marathon, he came up with an ambitious plan of running a marathon in every state. He is well on his way after running marathons in Ohio, Illinois, Texas, Florida, Arkansas and Kentucky.

Another goal includes competing in his first Ironman.

“Depending on how the first one goes, it might be my first and my last,” Hollanshead joked.

One last piece of motivation: great food. “I get to eat a lot,” he said. “Texas has the best barbecue, and I love TexMex. In one bike ride, I burn almost 3000 calories. You pretty much get to eat whatever you want.”

Why it’s worth it 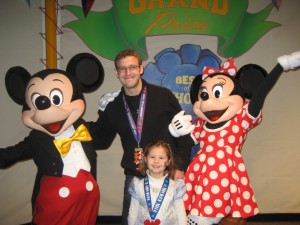 are watching and cheering for you. They know your goals and you don’t want to fall short of what you set out to do.”

Are you an everyday athlete/weekend warrior? Send us your stories at info@atlxtv.com and you could be the next ATLX Everyday Athlete Spotlight!