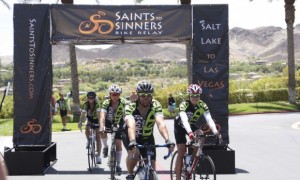 Tomorrow morning, racers will head out of the heavenly mountains of Utah on a 516-mile race to Sin City. The aptly named Saints to Sinners fourth annual bike race will send competitors in teams on an overnight ride of 50 to 100 miles per person. If the riders were more sinful than saintly before the race, their participation in a race raising money to fight Lou Gehrig’s Disease (ALS) will certainly help get them into heaven.

This charity is personally significant to the creators of the race: Steven and Jill Tew. The idea for the race began as a way to establish a charity for Ronald Frandsen, Jill’s father, who was diagnosed with ALS and passed away from the terrible disease in 2010. According to the race website,

“Although Ron ultimately passed away, ALS didn’t win. Ron taught us that we can’t always choose what happens to us but we can choose how we will react.”

Although there was no cure to save Frandsen, the race lives on working to raise money and awareness to contribute to finding a cure for ALS. 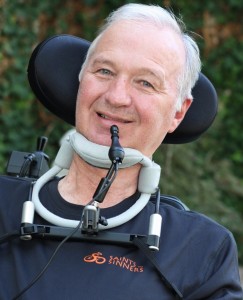 “[Mr. Frandsen] was still alive at the time, and was suffering from Lou Gehrig’s disease, and if you’re familiar with that disease, you know that it’s debilitating,” Tew told ATLX. “So we thought, how do we fight back? Well, you show ALS that it can’t beat you. The way to do that is to use your body. To be as active as you can. And this event is just that.”

All types of competitors come together for this race, from the everyday athlete to the elite cyclist. It seems that everyone wants to be a part of this fun and challenging event. “Some people just bought their bikes two months ago. It’s great because it doesn’t really limit it to anybody,” Tew said. “You have professionals who are doing it, you have novices, weekend warriors, it’s for everybody. It really is a blast.”

It’s not just the race that people look forward to. The finish line party can be as exciting as the race itself. This year, Zappos will be sponsoring the after-race party. And a party it will be, as the race ends at Las Vegas Lake and the event will be held at the Westin, Las Vegas.

Some people have competed every year, and wouldn’t miss it for the world. People plan their summers around this race. Even professional riders who compete in centuries find a different challenge in this race, and want to come back for more. “One rider told us that the hardest part was staying up all night and partying,” Tew said. “It’s a 24-hour party as you make yourself from Salt Lake to Vegas, part of the time on the bike, and part of the time in the vehicles having fun with your friends.”

But what is most important to the race founders, and what it’s really about, is the fight against ALS.  Tew said,

“It’s flying in the face of Lou Gehrig’s disease. Saying, you can’t beat us.”

For more information on ALS, visit their website here.