What would Indianapolis be without the Indy 500, or Charlotte, N.C., without NASCAR? For a handful of cities across the country, sports have long since been a source of pride and identity, but nowadays they also represent an opportunity to inject, in some cases, in the hundreds of millions of dollars into the local economy. 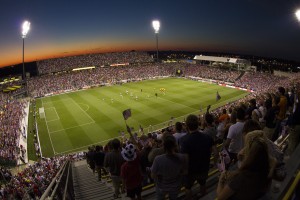 Through the leadership of the Greater Columbus Sports Commission, Columbus, Ohio, already home to the worldwide brand that is Ohio State football, is following the blueprint of cities like Charlotte and Indianapolis, working year-round to secure and organize some of the biggest sporting events in the world, events like March Madness and the World Cup Qualifiers.

“Economic development is our biggest thing,” said Bruce Wimbish, Director of Marketing and Communications for the GCSC. “But then, having those big sporting 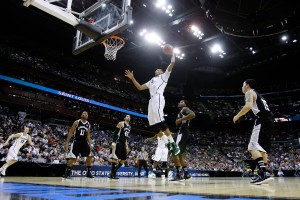 events over a weekend or a week, that is marketing that you can’t pay for. [And then] the pride for those who live here, the feeling of, ‘I live in Columbus, Ohio, and I can count on having the NCAA tournament here every three years, and the Memorial Tournament every year.’ We love to bring visitors, but also to instill pride in those who live here.”

There was a time when Columbus wouldn’t have stood a chance of winning the bid for one of these major events, if only because the perception was that it was a “small town” that wouldn’t have the infrastructure or overall capacity to support such massive productions. Many people don’t realize that Columbus is actually the 15th largest city in the U.S., or that it serves as headquarters to corporations such as Victoria’s Secret and Nationwide Insurance, or that there is even a city outside of Ohio State’s campus, a school that teeters between the first- and fourth-largest university in the country depending on the day.

“In the early years we were definitely [utilizing] the shotgun approach,” said GCSC executive director Linda Logan, who recalls bidding fast and furious on just about any event in an effort to prove Columbus as a worthy host city. “[But now] we’re trying to be much more strategic about what we bid on.” 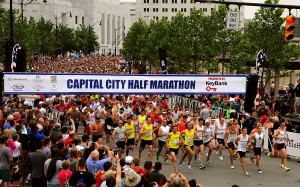 Whatever the approach, the GCSC is doing something right. According to their website, “more than 200 new sporting events have come to Columbus since the GCSC first hit the ground running in 2002, generating an estimated $200 million in visitor spending.” Indeed, Columbus has come a long way. So long, in fact, that the city was recently invited to bid on the 2024 Olympics.

“Certain events are aspirational,” Logan said. “The women’s final four. The NHL All-star game. We were thrilled to be invited to bid on the Olympics.” 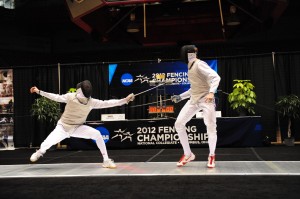 But again, the GCSC has earned the right to be selective, and understands the importance of knowing when something is, or isn’t, feasible. So the Olympic invite was respectfully declined, though the commission did encourage the US Olympic Committee to consider hosting the Olympic trials in Columbus. And there only appears to be more growth on the way.

“There are so many first-time events that we haven’t had, and we can see them on the horizon in succession,” Wimbish said. “We have a great close rate, a testament to [executive director Linda Logan]. Seven out of 10 bids we get, if not higher.”

All things considered, Columbus might never have the brand recognition of a Chicago or Miami or New York. But the aim is high, and the city is rapidly moving in the right direction. And for that, Ohioans have the GCSC to thank.