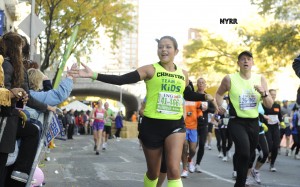 More than six years ago, Drew Swiss’ wife asked him what he wanted for his 50th birthday, and that’s how it all began. Swiss, who serves as Vice President of Finance at Montefiore Medical Center, told his wife: “The only thing I want is to run the New York City Marathon.”

Bear in mind that Swiss, a father of four, hadn’t run any distance to speak of since 1999. Still, he did it, completing the New York Marathon in 2007 and every year since. But to talk to Swiss, for as proud as he is of the personal accomplishment, it’s apparent that what he’s most proud of is the cause for which he runs.

You see, in order to run in the ING New York City Marathon, participants must raise a certain amount of money through a charity of their choosing (or entering through the 9+1 Program or NYRR’s lottery system). Swiss, for personal reasons, knew he had a match when he came across Team for Kids, a group of adult runners who fundraise to provide free or low-cost health and fitness programs to children who otherwise wouldn’t have regular access to physical activity.

I was one of these kids growing up in Brooklyn,” said Swiss, who recalls his mom reusing Crisco, actually pouring it back into the can after it had been used. “My mother fed me the worst garbage on the planet.”

“He’s a bit of a legend,” said New York Road Runners Vice President of Development and Philanthropy Michael Rodgers. “Year in and year out, he’s been our No. 1 fundraiser. We’re just really ecstatic to have his ongoing support.”

Thankfully, one click of the mouse allows Swiss to send a letter to over 1,000 of his LinkedIn connections, and he figures he sends out thousands of emails every year on top of that. Swiss’ initial foray into fundraising yielded more than $14,000 for Team for Kids, and being the ambitious guy that he is, he doubled that amount in 2008, raising $32,300.

In fact, since he began in 2007, Swiss has increased his fundraising total every single year. Although the cancelation of last year’s New York Marathon as a result of Hurricane Sandy meant that Swiss didn’t need to raise money this year, he still wanted to. He wanted to do the right thing.

Not surprisingly, Swiss’ philanthropic efforts have inspired various people in his life. A coworker used some of Swiss’ techniques to raise money for Back on My Feet, a nonprofit organization that helps homeless people begin to turn their lives around.

Swiss’ own kids have even caught the bug. When his oldest son, Robby, was 9 years old, Swiss showed him an article written about his philanthropy, explaining to his son the importance of helping others when you’re in a position to do so.

“[Robby] goes upstairs,” recalls Swiss, “he gets a dollar bill and he goes, ‘Daddy, I want to donate.’ That’s emblazoned in my head for the rest of my life.”

His 12-year-old daughter has also collected money through the Girl Scouts.

Swiss started running at age 13 but didn’t reach his peak condition until his 20s when he ran much more frequently. He cites running’s “therapeutic” quality as one of the reasons he still runs.

In early 2012, his youngest son, Shane, who was six at the time, was involved a bad car accident. After spending 14 days in the hospital, including 11 days in the Intensive Care Unit, Shane made a miraculous recovery. 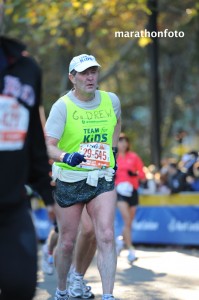 Although Swiss was only able to train every other day because he and his wife were alternating nights sleeping at the hospital, running provided a valuable outlet.

“I do my best thinking when I run,” he said. “And if I’m down for some reason and I run, I feel better.

“I have a strong desire to give back. I’m in a good position, where I’ve been lucky in life and I feel like I want to help these kids.”

Swiss has already done so much for the cause, both directly through his fundraising and indirectly through his inspiration of others to do the same, and he vows to keep running marathons until the passion runs out. And right now, there’s no shortage of that.

The application for the 2014 NYC Half for Team for Kids runners is now open: http://runwithtfk.org/Page/2014NYCHalf. The NYC Half tends to sell out very quickly each year. Remember, for those who don’t get in, there’s always the TFK option. And here’s more information on the 2013 NYC Half: http://www.nyrr.org/races-and-events/2013/nyc-half.