Hit the Hills for a More Intense Running Workout Running has its challenges, especially for athletes who are looking to run really fast or for a really long time. But for many professionals, and fitness enthusiasts who are just looking to get in great shape, flat land can’t compete with the hills. Whether it is running up or down hill, the workout presents challenges that flat land cannot.

“When you’re on flat land, there is no resistance pulling you,” said Jeff Johnson, trainer at Elite Athletes. “As soon as we take those same running mechanics and apply them to running up hill, you’re going to find that you will have difficulties keeping proper running form. For athletes, we love to do that because it is like overtraining. It’s over resistance training.”

Johnson has trained several NFL wide receivers including Terrell Owens, Chad Johnson, Antonio Brown, and Robert Woods. Johnson views running on hills as a way to build strength in the legs, which is why he has his athletes perform that type of training.

“Going uphill adds a tremendous amount of force to every cycle,” Johnson said.  “It’s using our triple extension more, which is our back foot pushing off of the ground to propel us forward…Athletes will exert all of their energy on every step.” 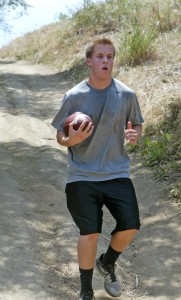 Research has shown that Johnson is on the right track when it comes to training. A study performed by Italian researchers found that when running at a seven percent incline for five minutes will increase the heart rate by 15 percent. Overall metabolic cost, which is measured in calories, increases by 53 percent.

Running hills is similar to resistance training as the activity in the glutes is increased by 83 percent.

“If you run hills consistently, it’s like doing a lot of squats,” Johnson said.

For the weekend warrior, or for people who are just trying to get in good shape, running hills adds a degree of difficulty that Johnson said will get them to their goals at a faster rate. An elevated heart rate means that the intensity level of the workout is greater, burning more calories. And the added leg strength and endurance in those muscles will help anybody who is competing in athletic events, such as triathlons, or adult league basketball games.

“If they took to the hill, their game will improve tremendously,” Johnson said.

For a tougher workout, get off the flat ground and find some hills.

Johnson can be contacted at jj.eliteathletes@gmail.com

2015-03-04
atlx
Share !
Previous: The Resurrection of Roller Derby
Next: Learn Parkour in the Safety of a Gym