Rock Out, While Working Out 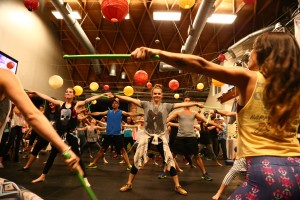 Pound-Rockout,  an innovative, new workout created by “the Pound Girls,” combines all three elements to ensure that participants are enjoying themselves, while getting a quality workout.

“It was hard for us to go to the gym and to find a way to stay motivated,” said Kirsten Potenza, one of the workout’s inventors, “so we wanted to create something with a really welcoming environment [and] a program that anybody could pick up.”

Potenza and Cristina Peerenboom, the other “Pound Girl,” are both recreational drummers who happen to love music. As former athletes, the structure of belonging to a team helped maintain their fitness, but as they grew older, “we kind of lost that framework,” said Peerenboom. 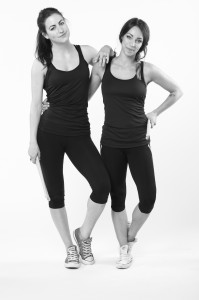 Peerenboom told the story of how the idea for the workout first arose. The two were squatting over their drum kit when the stool somehow became broken. “We kept squatting there without the stool and realized that our arms continually like that was pretty much like Pilates while standing,” she said. “So any wiggle that was happening in your arms was getting absorbed by your core, which was quite the work.”

This personal discovery quickly translated into a desire to form a group fitness class, and before they knew it, their newly created class had become very popular.

Recently, UFC Gym decided to add Pound-Rockout to its slate of fitness classes. According to Mindy Kreis, the director of fitness for UFC Gym, it was a perfect fit, given her company’s “Train Different” slogan: “You walk in the door, and there’s pretty loud music, [and] the energy level’s really high. For every 10 new class formats I see, only one or two connect correctly to the high energy of our operating system.”

For 45 minutes, those who take the class “play” songs with lightly weighted drumsticks called “Ripstix.” Each session burns between 600 and 900 calories per person, while the participants rock out to 12 songs of various genres. You might even forget that you’re actually working out.

“By the time the class is over, you’ve probably done like 300+ squats and lunges,” said Kreis, “and because you’re so worried about pounding the floor and staying on beat, you don’t really realize what you’re doing.”

“They also feel like, ‘Wow. I get the chance to feel like a rock star,’” added Kreis. “They’re cranking it out to Linkin Park or Rage Against the Machine. It’s just really atypical of a fitness class, being able to do that and actually see results.”

UFC Gym’s decision to implement Pound-Rockout one location at a time has effectively built momentum for future launches, according to Kreis. That said, teaching instructors to properly lead the class has had its share of challenges.

“It’s actually one of the tougher classes I’ve personally taught before,” said Kreis, “because the music’s loud, you have to cue and you have 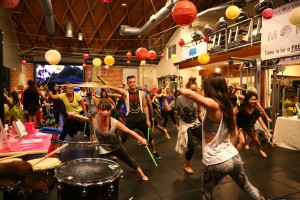 to stay on top of the choreography.”

Largely for that reason, the Pound Girls created an instructor network they’ve called “The Label” and a language dubbed “Sheet Music” in order to make life easier for Pound-Rockout instructors.

Going along with the drummer-music theme, when a trainer has been through the proper training and is approved to teach the class, (s)he is “signed to The Label.” Sheet Music translates the choreography into symbols, so that instructors are more easily able to learn new songs.

The Pound Girls introduce three or four new tracks per month to keep things fresh, but apparently many of the class regulars enjoy hearing the same song multiple times, so that they can perfect the moves.

“People are coming back to master the songs, and that’s why people get hooked,” according to Potenza. “It’s just like learning a piece of music.”

Rockout workout 2015-03-09
atlx
Share !
Previous: Learn Parkour in the Safety of a Gym
Next: Choosing the Best Diet for Your Body