By the numbers, the amount of races, and the number of runners participating in both marathons and half marathons, is growing. According to runningUSA.com: 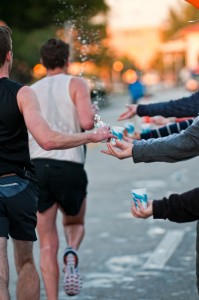 Running, no doubt has become more of a social event. There are costume contests, themes, and bands along the course. There are runs in which you get doused in color and mud, runs where you wear electric bands and glowing clothes, and even runs designed around wine tasting. Mud runs, obstacle runs and color runs, in fact, have grown exponentially in the past few years, as it is estimated that approximately 2 million runners participated in these non-traditional, adventure-type races last year.

More and more the race experience is becoming a weekend getaway, the medals are getting bigger, the swag better, and there are even races that go for multiple days with many team members in vans going from point to point. Social media is also helping with the growth. After all, who doesn’t love a good picture of a runner covered in mud?

Perhaps the coolest thing about running both half and full marathons, even if a lot of people don’t realize it, is that elite, professional runners, even Olympians (like American half-marathon record holder Ryan Hall, who won the 2008 US Olympic Trials and finished 10th at the Beijing Olympics), are running in the same race as first-time marathoners from down the street. But really, how many people know who Ryan Hall is? 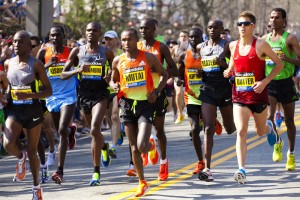 Or, for that matter, how many people know who Mebrahtom “Meb” Keflezighi is? For the record, Keflezighi, a 2004 Olympic silver medalist, won the 118th Boston Marathon this past April, becoming the first American since 1983 to do so. Just a few days from now, on June 1st, Keflezighi will be participating in the San Diego marathon and half-marathon to benefit the Leukemia and Lymphoma Society. Returning to his hometown and continuing the nationwide celebration of his historic victory, Meb will pace the 1:30.00 half-marathon group. That’s roughly a 6:30-mile pace, much slower than Meb’s full-marathon winning pace in Boston, but great news for those aiming to run a 90-minute half marathon while being paced by one of the best runners in the world.

“Meb truly epitomizes the spirit of what it means to be a runner and we are thrilled to have him join us and our participants at the San Diego race. What better role model to help us kick off one of our marquee events and to help us celebrate what the sport of running truly means,” said Tracy Sundlun, Senior Vice President of Competitor Group, Inc.

No doubt, Meb’s presence will draw plenty of running fanatics to the San Diego race, whether they’re actually running or just watching. And the one’s who aren’t there for him, well, they have their reasons, too. Maybe they are going for a personal best. Maybe it’s their first time and it’s all about finishing. Or, maybe it’s the bands lining the streets or the Elvis-clad runners drawing them in. Either way, the reasons for running are becoming more plentiful every day.