Conquering Cancer While Training for Kona 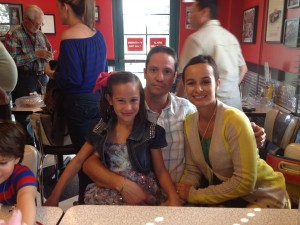 She often spent hours walking around outside during the time she was receiving weekly chemotherapy treatments. This allowed her to restore a temporary sense of normality during an otherwise mind-reeling experience.

“I realized it was an escape,” said the 39-year-old currently residing in San Diego. “It was a meditation. I felt normal during that time. I would be walking with other people around the park. They didn’t notice any difference in me.”

Alba was diagnosed with stage three breast cancer in June 2011 — a malady whose treatment interrupted an active lifestyle as a mother, kindergarten teacher, and athlete with years of participation in long-distance races, as well as five half-marathons (13.1 mi), a marathon (26.2 mi) and three triathlons under her belt.

The emotional stress triggered by consistent rounds of chemo — every week for 16 weeks, followed by every month for a year — fueled her constant pursuit of physical activity.

She still recalls the immediate aftereffects of each round of chemotherapy with vivid clarity. 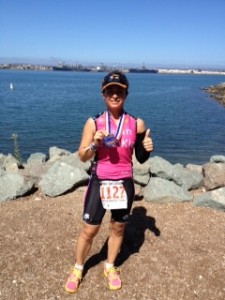 “It’s like having your worst hangover, and then maybe getting on all the Magic Mountain rides afterwards,” the Tijuana native said. “You know when you’re in bed, and you put your leg down to touch the floor? Everything is spinning.”

Such uncanny experiences threatened to break the spirit of a woman whose character was partially built by long stretches of endurance training and tolerance for physical stress.

She had a passion and respect for training her body regularly and pushing it to its limits — instilled in her by her father, once a professional baseball player in Mexico.

“The first time I received the chemo, it was a reality check,” Alba said. “You’re like — you know what…this is it. Because when they say you have cancer, you’re thinking — no I’m gonna get another opinion, and they’re gonna say, oh never mind. We mixed up the names. Or — it’s not that bad. …But that first time they gave me the chemo, I kind of lost it.”

In coping with the cancer treatment, she employed what her training for all those long-distance races had taught her: the gradual and strategic setting of goals in working up to the real thing — in this case a sense of renewed vitality and wholesomeness, which was spurred by her engagement in strenuous physical exercise.

Alba worked her way up to two Olympic distance triathlons (.93-mile swim, 25-mile bike, 6.2-mile run) — one while she was in the process of receiving radiation and monthly chemotherapy in June 2012, and another two months after.

“My oncologist said that I was overdoing it and that I needed to stop, relax, and take care of my body,” she said. “But I’m not that type of person who’s sedentary and sits there, doing nothing. I’ve always been active. And through this whole journey, I learned that being active and walking and exercising was my escape, my outlet, my channel to send those emotions through there.”

Alba said her acute awareness of her own body’s limits and capabilities propelled her to train despite her oncologist’s recommendations — completing a half-marathon and an Olympic distance triathlon in June 2012. 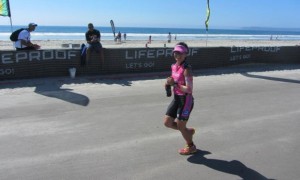 “When I finished that triathlon — almost towards the end of radiation — I went into (the oncologist’s) office with my medal framed and a little plaque, and I took it to her and she was in tears,” Alba said. “And right now the frame is hanging in their lobby at UCSD (University of California San Diego Moores Cancer Center).”

The breast cancer experience gave Alba a new approach to physical exercise and endurance events, which she put into practice during a half-Ironman in November 2012.

“When I did triathlons before being diagnosed with breast cancer, I was very competitive,” she said. “But after being diagnosed, I do it more for fun and I try to enjoy it and love it. I look around, and I see the trees and I smile at my competitors.”

Doctors slated the cancer’s chance of reoccurrence at 50 percent — after a December 2011 mastectomy revealed a 6-centimeter active, positive tumor and 11 positive lymph nodes. Essentially, the chemotherapy had been ineffective.

This year, Alba will not check off an immense item on her bucket list — participation in the 2013 Ironman World Championship in Kailua-Kona, Hawaii come October.

Her pathway to this dream-come-true was through an entry into the 2013 Ironman “Kona Inspired” contest.

Participants submit a video telling their story and sharing their adherence to the Ironman mantra, “Anything is possible.” Winners are chosen through votes from the public on the Kona Inspired contest website.

Alba was a finalist — one of 45 — seven of whom will make it to the barren lava fields of the Kona racetrack, to endure 45 mph crosswinds and a scorching sun during the 2.4-mile swim, 112-mile bike race, and 26.2-mile marathon.

Alba’s video garnered 30,000 views, though she did not emerge victorious. She has set her sights on New Zealand in 2014, where Ironman New Zealand will celebrate its 30th anniversary.