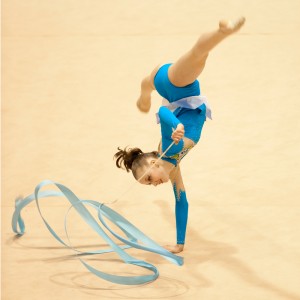 If it’s pretty, it must not be a sport. At least that’s the common misconception when it comes to rhythmic gymnastics, a sport that has been satirized by the likes of Will Ferrell in Old School and countless whirling, twirling Saturday Night Live parodies. So mocked has this sport been that most people have no idea how much strength, training and talent is required of these athletes. For rhythmic gymnasts, fighting stereotypes is an all-too-common occurrence.

Perhaps to even begin to appreciate this sport, one must first trace back the evolution. The sport culminated through classic ballet, a German system of apparatus work for muscle development and rhythm. The sport was birthed in the 1800s, but it wasn’t until the 1930s that the first official competition was held in Eastern Europe. It became an official Olympic sport in 1984, and as with any Olympic sport, one day of training will tell you just how fit, strong and talented these athletes have to be.

“I feel like people think our sport is kind of a joke, that we just dance around with music,” Olympic hopeful Rebecca Sereda said in an interview with Buzzfeed.com. “That’s a very big misunderstanding, because our sport requires so much hard work. We train for so many hours, but people think we’re just dancing with ribbons on the carpet.”

Beyond where the sport comes from and what goes into it training wise, it is also important to understand all of the complicated rules. If you think of a conventional gymnast doing a floor routine, in rhythmic gymnastics, the competitor is judged on difficulty, artistry and execution for each of the five events including the aforementioned ball, hoop, rope, club and ribbon. The apparatus must be in constant motion during the entirety of the competition, and the competitor must always stay on the marked floor.

As mentioned, there are several planes that judges pay close attention to, and certain heights the apparatus must reach when it’s tossed in the air. Also, the apparatus is often caught blindly.

“It’s basically the combination of contortion with ballet, while tossing around a hand apparatus with the precision of a trained marksman,” said Dr. Grace Hameister, a former competitor.

To be competitive, athletes must train in strength and flexibility, as well as constant drills with the different apparatuses. The coordination of doing it all in sync is off the charts. 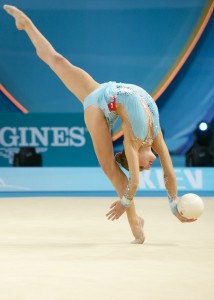 “I train six days a week, five to six hours a day,” said Sereda. “Training usually starts with ballet, and moves through strength training and practicing my routines.”

Rhythmic gymnasts aren’t just training for one event. They must perform with each of the apparatus’, which requires a mastery of them all. It can be compared to traditional gymnasts who must master the parallel bars, vault, floor routine and balance beam. It’s a sport of versatility, and just one missed throw with the six-foot ribbon can tank your score or even injure the athlete.

“One or two wild tosses and a club smack to the face … then the difficulty level starts to sink in a bit,” said Hameister. “Days are long, and the drills are painful to keep that level of flexibility up.”

It’s not just strength and flexibility that is required. It’s beauty. Rhythmic gymnasts are notoriously long and lean, much like a ballerina, and diet is an important aspect of keeping that image. 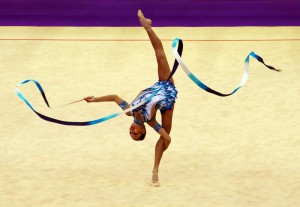 “Well, in rhythmic gymnastics you do need skinny legs, and they have to be muscular. You have to have a nice figure. But you don’t have to starve yourself, you just have to stay away from unhealthy snacks,” Sereda said.

You could argue, in fact, that the beauty of both the athletes and the movements, which is to say the sheer elegance with which rhythmic gymnasts operate, is part of the reason people think the sport isn’t all that difficult. It’s the classic situation of a great athlete making something very difficult look very easy. But don’t be fooled. When you consider the strength, flexibility, and uncanny coordination required to harness all of these precise movements into a flawless routine, even the biggest skeptic would have to admit just how impressive these athletes really are.