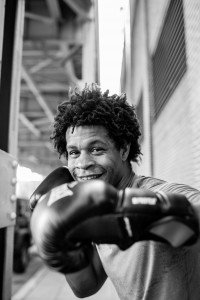 It was the year 2000. Errick McAdams was 25 years old and living in LA. He was working in the restaurant business and trying to be a writer. He was overweight. One night he was watching an E True Hollywood Story on Brad Pitt while drinking a six pack of Mountain Dew. Pitt, who was filming Fight Club at the time, had a six pack of another kind, and Errick, like just about every other guy in the world, was suddenly feeling a little down on himself in comparison to this ripped-up Hollywood hunk. And then, during the show, like some sort of sign, a commercial for a $5 gym membership came across his screen. And his life changed.

“I joined a gym because of Brad Pitt,” Errick laughs. “I have always been into boxing, and in Fight Club Brad Pitt was older than me and (still) looked amazing. I got off the couch, got in my car, and went straight to the gym and joined.”

Fast forward to 2014. Errick is now a personal trainer in Washington D.C. He recently ran his first full marathon not only for his own accomplishment, but to see that Parichart (Pari) Thepvongs, his long-time athlete, also finished. It inspires Errick to inspire others.

Pari isn’t one of Errick’s clients. She’s one of his athletes.

“I never use the word ‘client,’” Errick says. “It doesn’t describe the relationship I have with the people I work with. Clients are for attorneys. I train athletes. I don’t think you can — or at least I can’t be — an effective trainer on a part-time basis. Athletes need you in their lives more than just 2-4 hours a week. Everyone needs someone to believe in them. I am that someone. I believe in my athletes 100 percent. I cheer loudly for their successes. I support and encourage them through their struggles. We’re all in this together.”

So how did Errick ultimately become a trainer?

“I had moved to New York and was working at JFK (airport) during the 9/11 attacks, and I was laid off shortly after,” Errick says. “I had joined a Bally’s gym in Brooklyn and was dedicated and committed to going every day. Three women every morning took notice of my physical changes and asked if I would help them lose some weight, I was so honored to help them! I use to wake up thinking about these ladies, every day if they were eating well, staying motivated. I needed a job, and I saw a ‘help wanted’ sign at the gym, and since then I’ve been a trainer. I (also) became a certified boxing coach. I’ve done sales (at the gym), managed clubs, you name it. I love it.” 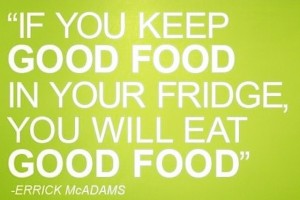 One of the first things Errick reminds his athletes of is that nobody’s perfect. He surely isn’t. He still has that Mountain Dew sweet tooth. But he manages it. He helps his clients – oops, his athletes – do the same. He has a signature, simplistic phrase: “If you keep good food in your fridge, you will eat good food.” It’s used in fitness magazines, blogs, it’s all over. Maybe that’s why he seems like a old friend, because his name, his face, they’re around.

Growing up in Colorado Springs, Colo., Errick was always very influenced by the military. The defining Marine call “UUUUUURAH!” is usually followed with a smiley face when he texts, emails, tweets. He’s known for the fact that he LOVES burpees, a notoriously excruciating exercise. Errick has been featured in the Washingtonian magazine, the Washington Post and the IDEA Fitness Journal. He proudly represents lifestyle brand lululemon and was featured in “The Secret Life of Errick McAdams.” His aforementioned trademarked quote — “If you keep good food in your fridge, you will eat good food” — has been posted on hundreds of nutrition and fitness websites. 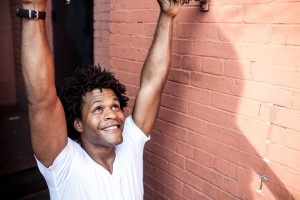 “Being a trainer isn’t just my profession, it’s my life,” Errick says. “I am motivated to help people achieve the balanced, healthy lifestyle that I have, from my own personal struggles.”

Errick is up a five o’clock every morning and on the go all day, and if anyone can keep up with him, it’s his wife. The two met on Match.com. His future wife’s profile said, “I work out 5x a week to keep my sanity.” Their first date was at the New York Health and Racquet Club on 23rd St., where, according to Errick, she “crushed it.”

The story gets better. Turns out, that same day they had their first date, Errick had gotten his identity stolen. Someone was using his credit card in Rio. His bank account was literally in the negative. “I couldn’t take her for a bite to eat, and I didn’t want to lie to her,” Errick says. “I told her about the identity theft, that I didn’t have any money, but that I could cook. She picked up healthy food, invited me back to cook. Her mother called to see “how the date with Internet guy went,” and I could hear her in the phone saying, ‘You can’t meet some guy and invite him back home to cook!’”

Luckily, she didn’t heed her mother’s advice, and things have, fittingly, worked out. His wife is the fitness freak who can match, if not out-do Errick, who says he would train eight days a week if he could.