We Can Change the World Through Sports

“Sport has the power to change the world. It has the power to inspire. It has the power to unite people in a way that little else does. It speaks to youth in a language they understand. Sport can create hope, where once there was only despair. It is more powerful than governments in breaking down racial barriers. It laughs in the face of all types of discrimination.”

With this speech, former President of South Africa and Laureus patron Nelson Mandela ignited athletes and corporations alike in creating a foundation to change the world through sports.

The Laureus Sport for Good Foundation recognized that the need wasn’t there for another nonprofit working on the ground level, but instead monetary and structural support. In the United States, one such program that exists: Up2Us is a program that trains coaches similar to Teach for America. The Laureus Sport for Good USA program realized not only how much sports can change a community, but how proper coaching can enhance that change. 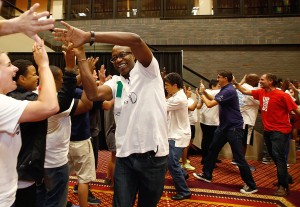 “We believe in the transformational power of sport as a tool for social good,” said two-time Olympic gold medalist Edwin Moses, who serves as Chairman of the Laureus Sport for Good Foundation USA. “Today’s coaches go beyond the traditional sense of the term ‘coach.’ They are mentors, community organizers and mediators. Investing in proper training and offering support for these coaches is vital to sports-based youth development, especially as youth violence and obesity escalate and school-based programs continue to be decimated by budget cuts. Programs like this are essential in America to fill the gap.”

Many communities lack coaches who are trained in dealing with many of the major issues that kids in struggling communities face. Many children see a coach as a mentor or in some cases, a parental figure, so there’s a lot of opportunity for a coach to make a positive impact off the court or field. However, the manpower and the training isn’t feasible without programs like Up2Us. 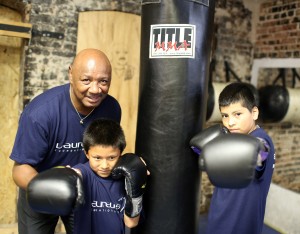 “This country has so much small community-based sport nonprofits, but they will never have that budget, but for a very small amount of money they can apply for a Coach Across America coach,” Matt Geschke, Director of Laureus Sport for Good Foundation USA said. “And what they’re going to get in return is a coach that’s trained up in a sport-based youth development. It’s going to be an eager 18-24-year-old, who has gone through extensive training, so they can deal with things that go on beyond the court or the field on a day-to-day basis.”
While every nonprofit organization has struggles, one of Laureus’ daily battles is enlightening people regarding the true reach of sports.

Outside of funding projects such as Up2US, part of Laureus’ initiatives include educating people with tangible and quantifiable evidence that sport does change lives and repays its debts exponentially.

While the New York-based Laureus Sport for Good Foundation USA is obviously based in the United States, the foundation is global with its vision set on global initiatives. This vision is best displayed through the Laureus World Sports Awards. The awards were created to celebrate the greatness of global sports every year.

“We call the Super Bowl the World Championship. We call baseball the World Series,” Geschke said. “It’s very U.S.-centric. Even though 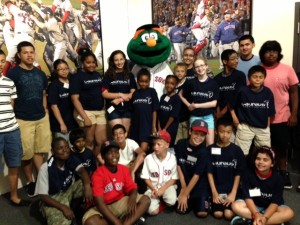 we have international players, it’s really not giving a true celebration of success of sport for that year.”

The Laureus World Sports Awards honors those athletes who have achieved great things, but they also strive to inspire people to do more. “We are making all of this money in sports. I don’t know what the exact number is, but it’s over $400 billion. At some level we have a responsibility to give that back and create change with that,” Geschke said. “The [Laureus World Sports Awards] is really trying to celebrate excellence in sport along with the responsibility that comes with that.”

For more information on the Laureus Sport for Good Foundation visit their website at www.laureususa.com