The greatest ability that an athlete can have is availability. No athlete, weekend warrior, or anybody who is just trying to get in shape, can perform at a high level while being injured, and that is where Courtney Watson comes in.

Watson is the head athletic trainer for the Los Angeles Sparks in the WNBA, so it’s safe to say- she knows her stuff.

When an athlete has an injury, Watson is the first person to spring into action, as she keeps a close eye on players who appear to 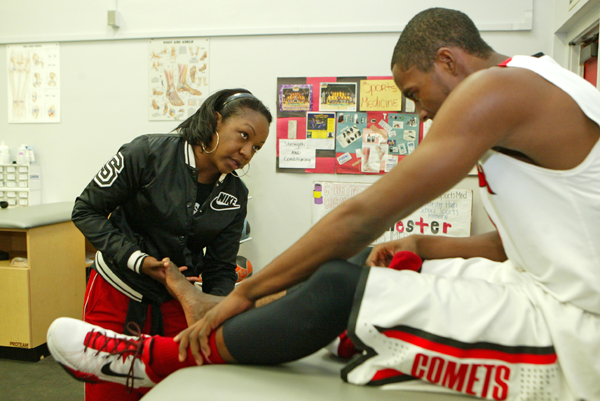 struggle health wise.  Through years of working with some of the most athletic people in the world, Watson can quickly diagnose an issue and get the athlete back out on to the field of play as soon as possible.

Watson is from South Los Angeles, but she did not have many influences in the field of medicine when she was growing up.  She is from an athletic family, so she excelled at basketball from an early age. Her interest in medicine happened when her high school basketball team was preparing for the California State playoff tournament, and she was nursing an ankle injury.

Along with another injured teammate, she went to the West Coast Sports Medicine Foundation in Manhattan Beach to get treatment on her ankle, and at that point she knew exactly what she wanted to do with her life.

The moment I walked into that facility I knew that I wanted to be an athletic trainer.”  Watson said.  “When I understood what rehab is, how to help care and prevent injuries.  Helping diagnose injuries and helping get athletes back on the field.”

Watson was amazed in what she saw in Manhattan Beach, so when she attended UC Berkeley she looked to study sports medicine.  But the only problem was that Berkeley did not have a Sports Medicine major.  That did not stop her desire to become an athletic trainer.  Instead of choosing a major that closely fit what she wanted to do, she created the major herself at Berkeley.

After graduating from college, Watson went back to Westchester High School, her alma mater, as a teacher and athletic trainer.  At that time Westchester had the best high school boy’s basketball team in the nation.  She worked with star players such as Trevor Ariza, Amir Johnson, Hassan Adams, Bobby Brown and Gabe Pruitt.  All of those players made it to the NBA.

Watson was so important to that basketball team that she traveled with them when they played high school teams that featured LeBron James, Carmelo Anthony, and some other soon to be NBA stars.

Westchester has an advantage over most of their opponents because most high schools, especially public schools, do not have an athletic trainer on site.  It is not required, and most schools do not have a budget for a trainer.  But at Westchester, they have allowed her to build a trainer room that has whirlpools, training tables, and equipment that allows her to keep their athletes healthy.

Watson has made a name for herself, as she has worked with NBA teams such as the Clippers, Hawks, Magic, the NBA’s Summer Pro League, the NBA’s Developmental League, the Houston Comets in the WNBA for a season, and now she is the head athletic trainer and strength and conditioning coach for the Sparks.

“It’s a dream come true,” Watson said.  “I always wanted to be on the top notch professional level of working with women.”

Giving back to the younger generation is important to Watson, so she created an internship program for high school and college students that are interested in becoming athletic trainers.  She usually runs the program out of the training room at Westchester High School, but she takes her students out into the field to work at various camps and games.

This type of internship program is also important for young athletes, because their careers can only last so long, with most of them ending in high school.

“It’s all about recognizing different avenues of getting into the sports field,” Watson said.  “Everybody can’t be an athlete.  Everybody needs to understand that there are other avenues that they can go down.”

People can ask Watson questions about their injury issues.  Visit the Sparks website at www.wnba.com/sparks, click on “Fan Zone” and then on “Courtney’s Corner.”  On Watson’s page there are training tips, workout programs, videos, and information about the internship program.