What Kind of Junk is in Your Trunk? 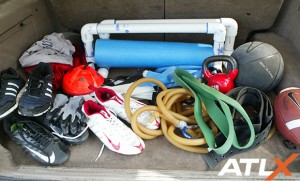 “Only thing that you can’t do is heavy, heavy weights,” Cephas said. “Unless you’re into bodybuilding, where you’d have to lift a lot of weight, you do not need all of that equipment. If you want to get stronger and have a nice physique, there are different methods.  Everyone thinks that you have to lift heavy, but that’s just not true.” 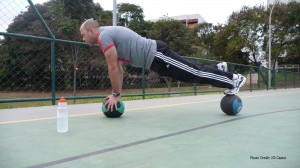 The ab wheel effectively works outs the core muscles, and the shoulders, triceps, and hip flexors get some action too.  The nature of the movement causes a person to have to use their stabilizer muscles to a much greater degree than doing normal sit-ups and crunches.