Community Workout Groups Across US 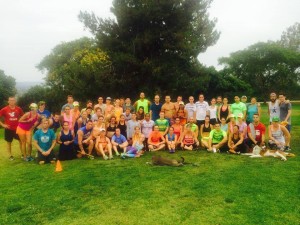 No surprise, Boston is the birthplace of a growing, grassroots workout tribe called “November Project” that’s spreading to large cities around the US. It’s free of charge, you don’t sign a waiver and they don’t want your email.  It’s a bit cultish in a good way … elevating community camaraderie in the name of a good workout with good friends.

In January 2014, my running partner had talked me into a New Year’s-resolution 15k run the night before a race. At mile 2, I literally ran into, and couldn’t lose, 29-year-old Lauren Padula. As we ran shoulder to shoulder holding sub-seven-minute miles, simultaneously saying hi to friends and giving high-fives to the water station volunteers, I finally mustered up the breath to engage Lauren a little mid-run conversation. That’s when she told me about the November Project, for which she is the San Diego leader. She started the free fitness group with her two best friends from college, Jessica Craik and Ashleigh Voychick.

A couple weeks after that first encounter, about the time November Project Boston was featured on the cover of Runner’s World magazine, I went to see what Lauren’s San Diego tribe was all about. I got it handed to me via burpees, bear crawls and hill sprints atop a large grassy park with 360-degree ocean views at 6:30 a.m. I wasn’t alone, but now, some six months later, the group is attracting close to 70 people a session. So, where does the “November” in November Project come from?

College friends Brogan Graham and Bojan Mandaric were living in Boston in 2011 and getting lazy. They needed each other’s support to get moving, and they figured if they could commit to working out together every day in November — when the New England weather is, shall we say, pretty conducive to sitting inside wrapped up in a blanket drinking hot chocolate – then they could do it any time. So they started, one day at a time. Word began to spread. The idea of a workout without expensive gym fees, and more importantly, with the support of others, really started to catch on, and before they knew it other people were starting to join their little group. Just like that, the November Project was born.

As the group grew, so did the social media buzz. Lauren, Ashleigh and Jessie, who went to the college in Boston but were long-time San Diegans, were reading and hearing about their friends going to this November Project workout back east. They knew of founders Brogan and Bojan, but not personally. The ladies had to “apply,” via essay, to start a San Diego November Project, detailing how their workouts would be challenging and fun. They were approved, and now, if you come to a NP workout in San Diego, you could find yourself wearing a cape or playing rock-paper-scissors. Check out all the different NP locations here.

One of the most basic and important foundations of NP is good old-fashioned interaction – you know, talking to someone you can actually see rather than via text message. Through real, face-to-face interaction, and all the encouragement that comes with it, members push and inspire each other to dig down hard for that last push-up, or kick a little faster up a flight a stairs. Everyone’s in it together. And again, it’s free. Not a single dime is collected at any of the 17 NP drives (16 in the US and one in Alberta, Canada).

“We get asked if we get paid to lead these sessions, (and we say) it’s more rewarding to have someone tell you, ‘I look forward to coming’ or ‘NP changed my life.’ The best payments are the friendships made through sweat and the fact that people come back because they want to.”

Lauren, Ashley, and Jessie are simply getting up to work out with friends. The idea is to work their tails off all week to make it so much fun that you don’t want to miss it. Because if you don’t miss the workout, they don’t want to either. And vice versa. The power lies simply in showing up, and the energy and commitment becomes contagious.

The workouts are early because they make time before work, but you’ll be reaping the benefits of feeling awesome all day. Wednesday is the flagship day. All cities that are granted a November Project leader start with Wednesday to get over that middle-of-the-week hump, and give people something to look forward to. In San Diego, they’re now meeting on Mondays, too. Every attendee that shows up, whether they’re a regular or it’s their first time, is greeted with a hug. Nobody is a stranger. Oh, and they tend to drop a lot of F-bombs. “It’s not socially acceptable to let out a “F-yeah!” at any other time in your day,” Lauren says. “We are supposed to be politically correct, calm, mature, but you know what, sometimes after a great work out, you just want to get out a good ‘F-YEAH!’ You don’t have to but you can … and it sort of feels awesome.”

November Project doesn’t advertise. Again, it’s grassroots. Members blog and post pictures on social media, and the community continues to build. Leaders go to other groups and invite other athletes to come join them. As a sort of badge of commitment, those who are regular attendees get their neon workout shirt spray painted with the November Project name. Every city design is basically the same, with waves to distinguish San Diego tribe. One of the coolest things? Many members proudly wear these shirts all over because they name has come to mean something; so if you’re traveling, walking through the airport, and you see someone else with an NP shirt from any of the 17 cities, there’s an instant bond.

November Project is helping big cities feel more like communities. People are making friends and getting in shape free of charge. If you’re in San Diego, Lauren and company will welcome you with open arms, make you feel like a part of the group, and put you through one heck of a workout during which you can drop all the F-bombs you’d like. Seriously, what better stress relief could there be that that?