When Kacie Cleveland tells you that she loves doing things she doesn’t like to do, you can’t help but wonder if you heard her right.

You love doing things that you don’t like to do?

“I know,” Kacie laughs. “It doesn’t make any sense when you say it like that.”

Last year Kacie rollerbladed across the country, from California to Florida, in just over 47 days. She also set a world record by climbing the stairs of a 42-story building for 24 straight hours, her four-person team ascending more than 76,000 feet, the rough equivalent of 2 ½ trips up Mt. Everest – and surely, on some level, this doesn’t make a ton of sense either. But perhaps to understand why Kacie does the things she does, why she lives the way she lives, you have to first understand how close she came to not living at all.

The first sign of trouble came six years ago, when Kacie, a college 800-meter runner who seemed to be in the best shape of her life, collapsed in the middle of a five-mile run. The next thing she remembers is waking up on the sidewalk, her knees and elbows bloodied from the fall, her heart beating so hard that she couldn’t hear.

“I was so scared, and my heart was just pounding,” Kacie says. “It took me more than an hour before I could even stand up.”

Though rare, elite-level athletes have been known to effectively train themselves into a heart attack. It’s called Athlete’s Heart Syndrome, a condition whereby the heart becomes enlarged as the result of an ongoing, intense aerobic regimen – but that didn’t appear to be Kacie’s problem. Truth be told, doctors didn’t know what her problem was. For two years they watched helplessly as Kacie endured episode after episode, at times her heart racing as high as 254 beats per minute before simply shutting off. 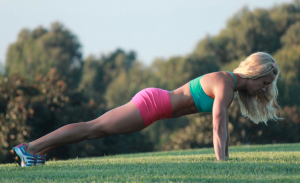 “And one of these days,” Kacie recalls being told, “it’s not going to turn back on.”

In no uncertain terms, Kacie was told she was going to die. It was a matter of time. And in the meantime, she had also developed compartment syndrome in both her legs, which basically means she wasn’t getting enough blood into her muscles. Perhaps it was related to the heart issue, perhaps not, but either way her legs were swelling terribly after any sort of strenuous activity and she was incurring severe nerve damage. Her track career was over, and soon she could hardly walk. She had to drop out of school, and when it got really bad, she was completely bedridden for two months.

“I never understood depression until that point,” Kacie says. “I would just sit in my bed and cry for hours. I was so angry at the situation, and even at other people for not taking advantage of their health. It was the lowest point of my life.”

But then, Kacie says, she simply decided to change the one thing she could control, the one thing we can all control, and perhaps the most powerful healer of all: her attitude. She says she made a conscious decision to stop looking at her life for the things that she couldn’t do, and start focusing on what she could. She learned that swimming, if she used only her upper body, was feasible. She still couldn’t walk, so she wore shoes that allowed her to slide along the ground. She would sit down on the edge of the pool, test the water by leaning down with her shoulder, and literally just roll in.

“It was embarrassing at first,” she admits. “But it was a start.”

Slowly, she began to regain some of her strength. She re-enrolled in school. And then, out of nowhere, came a discovery as miraculous as it was unbelievable: her heart issue was being caused by her birth control pill. There was no mystery condition. She wasn’t going to die. After two years of being told there was no hope, she simply went off her medication, and her heart hasn’t misfired since.

“It was an enormous relief, obviously,” Kacie says. “But it’s not like I was completely out of the woods.”

Indeed, the compartment syndrome persisted. Her legs couldn’t seem to handle any sort of vigorous workout. She was told she would never run again. But in keeping with her refusal to accept limitations, less than nine months later Kacie ran the Boston Marathon in a time 3 hours, 44 minutes. Her legs swelled up like crazy, but it was worth it.

“And believe it or not,” Kacie says, “I didn’t run a single day in preparation. I did all my training in the pool and on the bike. Before I qualified for Boston, the furthest I’d ever run in my life was 12 miles.

Finishing that marathon was mental. It just goes to show that if you want something, you can get it.”

And so, armed with the confidence that comes with conquering the so-called impossible, Kacie resolved to take her fitness and competitive spirit to another level. She began researching new ways to attack her passion, and came across an 86-story race to the observatory deck of the Empire State Building. It’s considered the world championships of stair climbing (a real sport, by the way), and Kacie knew she had to do it.

“I didn’t have any idea how to pace myself,” Kacie laughs. “I took off like a bat out of hell, and ended up pushing so hard that I tore the lining of my lung on floor 50. At that point I blacked out, but I still finished the race.” 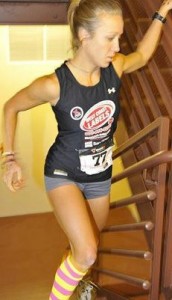 More specifically, she finished 20th out of some 300 professional competitors. Shortly thereafter, she finished a 30-story race in San Diego in three minutes flat, a time only two men in the world have ever bested. Next came the 42-story, 24-hour climb that succeeded in setting another world record. But of course, her most incredible feat was still to come: the aforementioned cross-country skate.

Carried out not just as a personal mission but also as a way to raise money for the Special Olympics, Kacie, with a bus full of supporters in tow, began her journey in Solana Beach, California. Skating an average of 12-15 hours a day, at times she was hitting speeds of better than 20 mph. Other times, when the road was rough or it was pitch dark, she was down around 2 or 3 mph. She skated past beaches, deserts and swamps, enduring the gamut of terrain, but without question it was the rocky roads of west Texas that most tested her will.

“It got to the point where I was coming back to the bus in tears every five or ten miles,” Kacie says. “At times the road was so bad that I couldn’t even skate, and have you ever tried walking in rollerblades? My ankles and legs were killing me.”

But she kept going, because that’s what Kacie does, and on the 48th day, after landing in Jacksonville, Florida, she had broken a world record for the fastest time across America on inline skates by a female. Again, it might seem like a strange record to break, or even set out to break in the first place. But for Kacie, the record was, and is, largely irrelevant. For her, it’s all about the challenge. She purposely puts up walls in front of herself just so she can break through them. One day it might be a 5K. The next it’s a 120-mile bike ride. Honestly, you never really know with this woman.

These days, Kacie, among other things, is a personal trainer, and at the end of her sessions, when her clients are jelly-legged and struggling to catch their breath, she’ll ask them, “What is the one exercise you least want to do right now?” They usually choose burpees, to which Kacie responds with, “Okay, time for some burpees.”

She’s not trying to be mean, she just knows that to take the easy way out is a recipe for regret. But to take on the challenge of something hard, something we don’t particularly want to do, and get through it? That’s empowering. That’s the stuff that keeps the athlete in us all moving forward.

And when you say it like that, it makes perfect sense.