Jon Sutherland boasts the longest active running streak in the United States, dating back to May 26, 1969. He has an amazing memory, but the detailed records he keeps are even more impressive.

On October 10, 1972, Sutherland was “reading a lot of Nietzche” in Philosophy class, had just gotten tickets to see David Bowie, and of course ran a great deal. In the morning, he ran with his dog, Kumere. In the evening, his cross country coach, Laszlo Tabori, ran the team all over the grass track. Somehow, Sutherland did the entire workout barefoot. His daily mileage totaled 20. 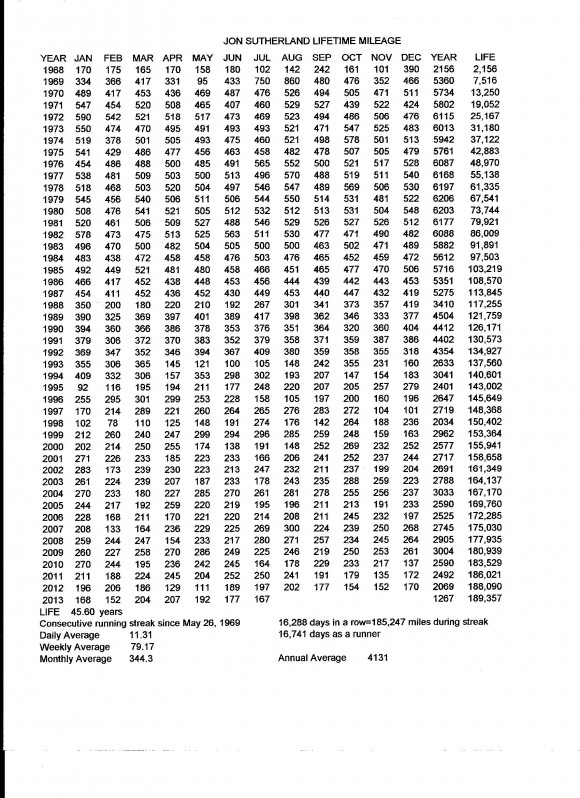 There are two journals: an all-inclusive life journal and a running-specific one that looks more like a grid. According to Sutherland, he can fit an entire month on each page.

The running grows more difficult by the year. As Sutherland noted in his August 11, 2013 entry, “I have a lot of physical issues now that have come on in the past couple of years.” After listing all his current ailments, Sutherland ultimately concludes, “Still I keep running, because I love it dammit!”

On August 11, four miles with his dog, Puck, was all he could muster. At one point, a young mother flew past them in a baby jogger. “Has it really come to that?” Sutherland rhetorically asked in his journal.

According to his records, Sutherland has run more than 189,500 miles since he began keeping track. He aspires to reach 200,000 one day and estimates that it will take four or five years to accomplish.

But how in the hell has he run every day for more than 44 years, averaging 11.3 miles per day?

Injuries, alone, could have easily derailed the runner’s streak, but he’s repeatedly refused to let them.

Sutherland likes to joke that he’s “had every injury known to God,” and he’s not really as far off as you might think.

The 44-year streak has witnessed 10 broken bones, including six ribs, a hip, an elbow and two stress fractures in his feet. 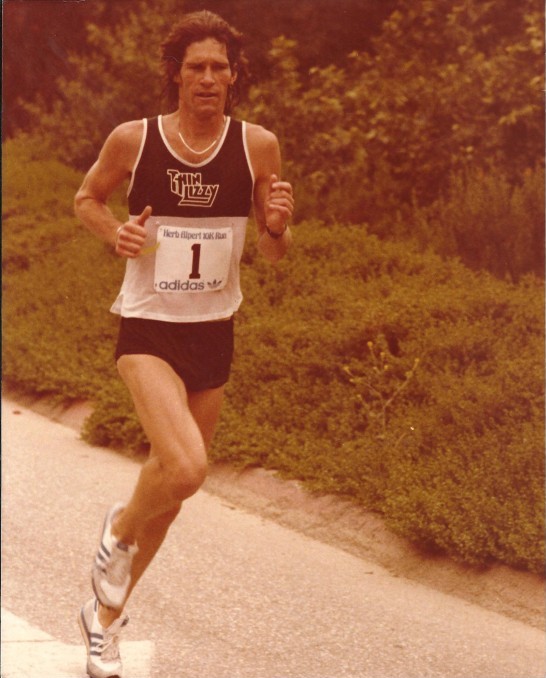 He had arthroscopic surgery on both knees, but ran the day of and the day after. It took three or four weeks until he was out of pain, but he powered through. Amid all the injuries, “I figured out a way to run,” said Sutherland. “[I’d] go to a grass field [or] get a pair of shoes too big just to keep it going.”

The worst injury he’s ever suffered was an avulsion fracture of the hip that took him nine months from which to recover. “I was running a half-marathon,” Sutherland recalled, “and it was hailing, and I slipped on a piece of ice and broke my hip.” What did he do? What do you think he did? He kept running.

Sutherland’s work schedule and romantic relationships have also unsuccessfully threatened to end the streak. In 1991, as a journalist, he attended 179 rock concerts, but still found the time to run 4,402 miles that year.

Various women in the prolific runner’s life have occasionally taken issue with the streak.

“It’s always a conflict, especially with girls,” said Sutherland. “They think they’re the one that’s gonna get you to stop running and they’re gonna change ya, but it’s not gonna happen.”

Growing up, Sutherland was a big kid, carrying the opposite of a stereotypical runner’s body, and now stands at 6-foot-4. He didn’t always run. While pitching for Granada Hills High School (Southern California), he took up running in order to improve his ability on the mound. Quickly, his endurance improved, but he also started to lose weight. To this day, Sutherland weighs more than 20 pounds lighter than the day he graduated high school. How many people can say that? 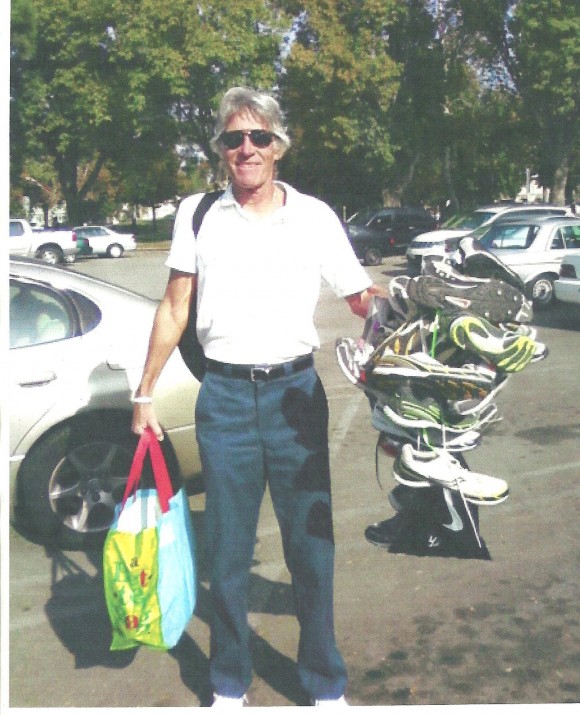 Over the years, he’s developed a routine around his running. Typically, he wakes up, reads online – nowadays for about 40 minutes – and then takes his morning run. The goal is to run twice most days, but that doesn’t always happen now that he’s 62 and averaging “just” 10-12 runs per week.

During his runs, Sutherland never listens to music. As an avid music enthusiast, he refuses to listen passively, with the music playing in the background. Otherwise, Sutherland would feel cheated of all the distinct sounds and instruments he’d prefer to study. For that reason, he saves music for times when he can give his undivided attention.

The silence allows Sutherland to think. “I do almost all my writing when I run,” said Sutherland. “I’ll think about what I’m going to do. I’ll literally talk the story out in my head, and then when I get back, it comes out.” Similarly, while he’s running, Sutherland likes to prepare the speeches he plans to make to his cross county team at Notre Dame High School (Sherman Oaks, Calif.). Sutherland’s work ethic was at least partially inherited from his college coach. “We had a coach, Laszlo Tabori, who was really tough,” said Sutherland. “We’d be there for two and a half [to] three hours, four days a week, begging him to stop, but we all did it. It taught us an incredible amount of dedication and perseverance.”

As with most elite athletes who go on to coach, Sutherland’s expectations for his runners can run extremely high.

“That’s the problem,” remarked Sutherland. “If you’ve been an elite athlete or a good athlete, you’ve gotta temper that with how good the kids really are. Can they do this? I’ve never coached a runner that ran a faster time than me on the track. I’m kind of disappointed.”

“For me, his standards were high,” said Richard Lucas, a two-year captain for Sutherland at Notre Dame from 2009 to 2011 and current runner at Boston College, “but never so [high] that it would hinder or put unneeded pressure on the athlete.”

Guy Arbogast, who met Jon at a race in 1968 when Arbogast was just 12 years old, added, “He had an incredible impact on me and played a huge role in my development into an international class distance runner.”

When fate renders Sutherland no longer able to run, his legacy will live on through the hundreds of runners he’s coached and inspired. The running will never cease.