So, you think the mud craze is just about adults running and striving to push themselves to new limits? 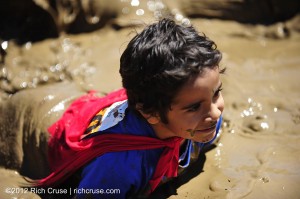 Merrell, known for its sleek and trendy athletic clothing and footwear, is launching their 2013 Merrell Down & Dirty National Obstacle and Mud Run.  Incorporated into this ruckus day in the dirt are two fun filled events for children, under a banner called

The first event, a 100-yard-dash for parents to conquer with their little ones, is for kids ages four through six.  The second event is for older kids, ages 7-13 years old.  They face a mile-long course with six to seven obstacles, including balance beams, walls, tires, etc. And of course, these Adventure Kids cross the finish line of their epic run by diving into a 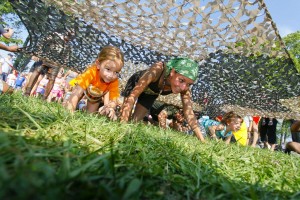 After all the mud is hosed off and the dirt is wiped away, the kids get to participate in a worthy cause. Merrell has partnered with Operation Gratitude, a non-profit organization that sends over a 100,000 care packages annually to U.S. Service Men and Women deployed at home and abroad.

Their mission is to lift morale and put a smile on the faces of those who serve to protect our Nation. Adventure Kids get to help assemble these care packages filled with snacks, personal letters, toiletries and entertainment items.

Sponsored by Subaru, the Merrell Down & Dirty will launch

across the nation starting next month in Los Angeles.  After kicking things off in LA, the series slips and slides it way across the country with stops in Miami, Chicago, Dallas, Hartford, Philadelphia, Washington D.C., Detroit, New York, Atlanta, and back to California for the final mudding up in Sacramento.

If you’d like to know more, check them out – www.downanddirtymudrun.com

Look out Weekend Warriors, there’s a new kid on the block ready to get “down & dirty…”