The Infatuation With Spring Training 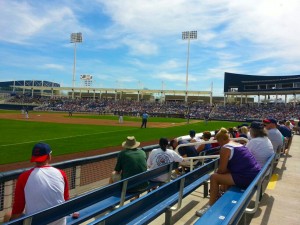 Next week marks the beginning of regular season baseball, meaning that Spring Training is coming to a close. March 20, 2013 marked the official first day of spring, but for many that day came in mid-February when their favorite players reported for Spring Training. And for many fans, it’s the most wonderful time of year.

Fans flock to Arizona and Florida during this time to watch what are essentially glorified practices and exhibition games. Nicknamed the Cactus League and the Grapefruit league respectively, every team in Major League Baseball heads to one of the states. Veterans  hone their skills during this time while rookies pray they don’t get cut. Fans head to these stadiums with affordable tickets to watch their favorite players up close, create their own scouting reports and for nearly two months become self-proclaimed experts on baseball.

There is accessibility in baseball that you also don’t get with other sports. Anyone can go to a game, or multiple games during a season. At least if you stay away from the concession stand with their five dollar sodas and ten dollar nachos. And, if you can afford the trip to Florida or Arizona, Spring Training offers even more accessibility to the teams and players.

One of the appeals of Spring Training is that the two states hosting Spring Training have beautiful weather during this time of year. Spring Training also corresponds with Spring Break for a lot of families, and many of them travel to Florida and Arizona to spend their spring break basking in the sun and watching their favorite teams.

The Players are Humanized

Not only are the fields smaller and more personal than the big stadiums, it’s also not uncommon to see players out shopping at Fashion Square Mall in Scottsdale, or out and about in Tampa Bay.

Players are also humanized during this time. The players with the million dollar contracts are on the same buses with the rookies trying out. They all play on the same fields and do the same drills. They may be the highest paid athletes in the world, but that doesn’t exempt them from batting against first time pitchers, and practicing drills over and over and over again.

Restores Hope in Your Team

It’s a new year, and anything can happen. Even if your team lost every game last year, there is always a new rookie, a new manager, or a new trade that is going to turn everything around for your team.

Check Facebook or Twitter during this time and you will see that hope throughout your friends posts. Listen at the water cooler in your
office, and both men and women will be discussing why it’s finally their team’s year.

Spring Training allows the team’s fans to become professional scouters, discover the latest and greatest rookies, and to restore faith that this year is going to the year that even the worst of teams ends up in the World Series.

The funniest and craziest stories always seem to come out of Spring Training. An article on ESPN, cites a story where Barry Bonds dressed up as Paula Abdul to spoof American Idol and another story about Billy Crystal leading off in an exhibition for the Yankees.

The stories continue with Tug McGraw spending his St. Patrick’s Day with an Irish Bar Crawl on his walk home from the Phillies’ facility. Or maybe the story that epitomizes Spring Training is when Indians pitcher Brian Anderson hopped on the bus and upon arriving realized he had forgotten his mitt, spikes and hat and had to borrow a car to go buy a mitt and spikes at Walmart. According to espn.com, Anderson stated, “I was a Nike guy, so I had to blacken out the Adidas stripes on my spikes. I was a Rawlings guy, so I had to blacken out the Wilson label on my new glove. I had violated every part of my contract. The next spring, this lady comes up to me with a picture of me to sign. I’m halfway through my windup, and it’s a perfect shot of my blacked-out shoes and blacked-out glove. That story could only happen in Spring Training.”