Running a Marathon at the Top of the World 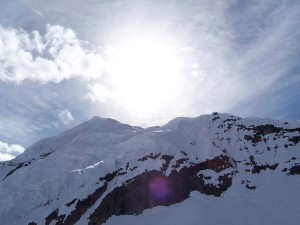 While many runners are prepping for the Boston Marathon on April 15, there’s another marathon taking place this Tuesday north of Beantown that some brave athletes are gearing up for. How far north? Try the 11th annual marathon run at the North Pole. Athletes participating in this icy run aren’t just worried about typical issues such as blisters and muscle cramps. With average temperatures at -40 F, they also must deal with the extreme conditions of the North Pole. Thinking about taking on this marathon someday?  Here are the top five concerns:

Many marathon runners have dealt with extreme heat, but few have had to worry about hypothermia during a race. Hypothermia is a very real concern when you’re running 26.2 miles in -40 F temperatures.

Hypothermia occurs when the body’s temperature passes below 95 F. At this level, the heart and other organs can’t properly function.

The North Pole Marathon organizers recommend that runners wear a ton of gear to keep their bodies warm, including a base layer, fleece layer and outer shell. For the legs and feet, organizers advise using sock liners, wool socks and trail running shoes. Make sure to you have enough room in your shoes for the extra layers on your feet. One pair of gloves and a pair of mittens are needed to keep your hands warm. And to top it off, a balaclava, facemask, thermal hat, neck gaiter and ski goggles are recommended for your head.

As if the risk of hypothermia isn’t bad enough, participants in the North Pole Marathon also have to worry about frostbite as well. Although it’s hard to imagine sweating in any weather below freezing, it’s pretty impossible to run 26.2 miles without getting your sweat glands going.

Without the proper equipment designed to keep sweat off of your body, the moisture your body produces can become trapped between your skin and the multiple layers of clothing, which can cause frostbite, a condition that occurs when the skin and tissue freezes which can lead to infection and permanent nerve damage.

The race website offers suggestions to prevent frostbite and hypothermia during the race. This type of clothing is not optional for this race if you want to keep all fingers and toes.

Polar bears may look cute and cuddly at the zoo or on commercials, but don’t let these animals fool you. Polar bears are indigenous to the artic regions in the North Pole, and unlike humans, are acclimated extremely well to the freezing cold temperatures, navigating the floating ice and freezing waters with ease. They are dangerous creatures, and the lack of food supply in the Arctic region makes humans a very tempting treat.

Armed guards were on site for the 2012 race, since two polar bears were spotted near the course a week earlier. Although polar bears weigh in at 1,600 pounds, don’t let their stocky exterior fool you. Polar bears clock in at 35 mph.

Nothing could help you reach your personal best like being chased by a polar bear.

4. Falling Through the Ice

When you’re at the North Pole, you may think you’re standing on solid ground, but what you’re really standing on is moving sheets of ice that lie about a foot above sea level. Although the North Pole Marathon employs high levels of safety, it’s impossible to ever be 100 percent-sure that the ice won’t crack beneath you during your 20th mile.

26.2 miles seems a lot farther when you can barely see anything. With the limited visibility and virtually no landmarks, it’s unsafe to have a 26.2-mile course around the North Pole. The race has been designed in 10 in 2.62 mile laps to prevent someone from running off the course never to be seen again.

The visibility and the continual laps add a mental challenge to the North Pole Marathon, because the race seems longer than it really is. The lack of landmarks also prevents runners from getting a good sense of their length that can prove to be mentally exhausting to add to their physically exhausted bodies.

2013-04-08
atlx
Share !
Previous: Why Does Your Lower Back Hurt?
Next: Reebok Celebrates Everyday Athletes in Latest Campaign