How ‘42’ Actor Chadwick Boseman Trained to Play Like Jackie Robinson 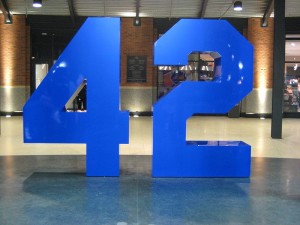 Hollywood often relies on CGI and green-screen techniques to create movie magic, but actor Chadwick Boseman had no such luxury on the set of “42,” which opens in theaters on April 12. Here’s how Boseman trained to get physically fit for the lead role of Jackie Robinson, the first African-American athlete in Major League Baseball:

In the movie industry, it’s never one take and you’re done. Boseman had to hit and round the bases over and over again until he was physically exhausted. So Boseman spent two months with professional trainers Dennis Reitz and David Iden and played baseball five days a week. The training prepared him to not only look and play like Robinson, but to also handle the physical pressures of shooting a sports movie.

The filmmakers turned to stunt coordinator Allan Graf, whose credits include “Friday Night Lights,” to get the cast into baseball shape. Boseman and his fellow actors went through “Spring Training” for nearly five months and prepared as if they were going to take part in an actual season. Graf also recruited former big leaguers, current minor leaguers and Division One college athletes to give the film a further sense of authenticity.

During Robinson’s playing days in the ‘40s and ‘50s, baseball was more of a contact sport than it is today. Robinson quite possibly dealt with more physical contact than other players, because of the backlash of being the first African-American in Major League Baseball. Graf prepared and coached all of the players to portray this gritty style of “old school baseball” accurately. The preparation was necessary, since Boseman didn’t want to use a stuntman during most of his scenes. He wanted his face and expressions to be in every shot.

Studying tape of a Hall of Famer

Boseman even went a step further by taping his training sessions and watching a split screen of it next to footage of the Hall of Famer Robinson. Ultimately, Boseman was intent on providing the most accurate depiction of Robinson. After all, many children may learn about Robinson and his historical significance through this film.

In the end, all of the training paid off and Boseman even got the thumbs up from his most important and maybe toughest critic, Rachel Robinson, Jackie Robinson’s widow, according to the New York Daily News.