For all of us who have sat on a lat pull-down machine, laid back on a bench press, nestled into a leg extension machine, or intimately laid ourselves down on top of a leg curl apparatus, I bet not many of us, myself included, have ever wondered, “Now who was the guy or gal who invented this machine?”  I also doubt many of us have ever pondered the scientific, evolutionary design process of the machines we trust and engage to transform our own physical being.

As a lifelong gym junkie, I have been a member of more gyms than NBA’s greatest journeyman Jim Jackson has been part of different NBA franchises.  For those that are not familiar with Jim J, he changed jerseys an awe inspiring dozen times during his 14-year NBA career.

I have worked out in the most plush gyms in the world from the extinct (and now Equinox branded) LA Sports Club in Beverly Hills to Doherty’s Gym in Melbourne, Australia, where you’ll see spray painted warnings on the wall cautioning you to “put your weights away” and a sign above the water fountain pleading workout patrons to “refrain from spitting in the sink.” 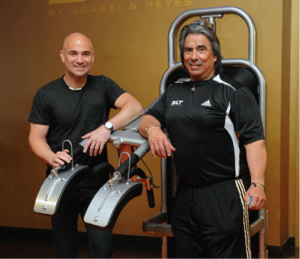 So the reason for this entire preamble before I talk about the new BILT by Agassi and Reyes gym equipment is to establish the fact that I have been around the block a few times, and I know my gym equipment somewhat more than the average weights warrior.  I also want to convey that I have rarely thought about which engineer, weights guru or gym development trainer who actually developed and invented the machines that could easily in any split second of usage slip a few of my discs or rupture my precious hamstrings or grant me membership to the inglorious ACL reconstruction club.

Now that I have established my credentials, I can enthusiastically talk about one of the most exciting workout days I have ever had in my life.  I was fortunate enough to be invited by Agassi Graf CEO Steve Miller to have a personal workout session with Gil Reyes and road test his new line of BILT by Agassi Reyes workout machines.

Now a little about “The Man.” Gil Reyes is a fitness guru and has been Andre Agassi’s strength and conditioning coach since 1989. Andre Agassi credits Gil for sustaining his physical conditioning during his amazing career that allowed him to win more tennis Grand Slams later in his career than in his earlier years. There are many inspirational examples I could convey testifying to the amazing results and effectiveness of Gil’s work, such as taking Andre’s bench press maximum weight from 135 pounds in 1989 to 350 pounds in 2003. Being in Gil’s presence, around his inspiring energy, engaging him in conversation and being instructed by him is truly moving.

Gil lives and breathes fitness and health and if ever a piece of fitness equipment could capture the essence of its inventor then BILT truly has. 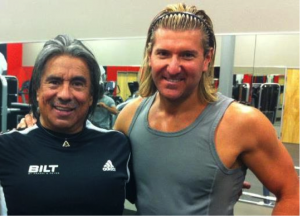 Entering the BILT showroom gym in Las Vegas was pure inspiration and exhilaration. I literally just wanted to run, not walk, but run to each piece of equipment and thrust out a maniacal workout with an energy level that even a gallon of Red Bull could not stimulate. The gym and equipment looks like something out of a futuristic movie, reminiscent of today’s gym machines, but with a twist.  Also striking is the obvious advancements, evolution and additions to even the most recognizable of machines, such as the bench press. 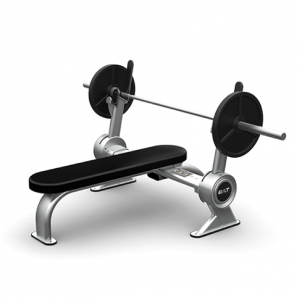 That is where my workout started. Not a bench press anymore, but rather a Flat Bench. The Flat Bench comes with retractable arms that holds your barbell and safely lowers it into your “sweet spot” over your chest, avoiding the awkward and potentially risky process of lifting the barbell over your head and then having to maneuver it into position. Once you have the barbell in your hands, the arms retract back away and you can start your presses.

Next up was a piece of equipment I couldn’t wait to try: the C.O.D.  Resembling a traditional squat machine, the C.O.D. looked much more elaborate and somewhat robotic. 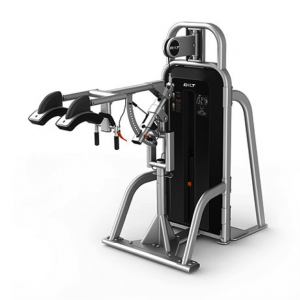 I guess the best way to describe the C.O.D. is a squat machine gone wild or mutated or, quite simply, evolved. Rather than merely nestling your shoulders under the holds and performing a simple standing fixed squat, this machine allows you to shuffle and move laterally, whether you want to step, jump or shuffle, while still having the weighted holds over your shoulder. This will truly revolutionize the way athletes train, especially ball players, whether it be a football linebacker, a soccer midfielder or a basketball power forward, looking to greatly sharpen their lateral movements.

As the workout continues, you are simply awe struck by the incredible and intelligent advancements that the BILT range has brought to fitness equipment.  I would liken it to the jump that old cell phones made when they became “smart phones.”  The equipment is more interactive and user friendly, and you find yourself aching to engage in exercises such as bench presses that you once found laborious or mundane.

Hearing of the process of how the equipment came to be is equally inspiring.

Essentially, they were born out of necessity to help Andre in his strength and conditioning training. Gil would think up a piece of equipment and go out and build it himself with rudimentary pieces of steel and pulleys and whatever else he needed.  Indicative of his determination and tenacity, Gil even taught himself how to weld, so he could manufacture the equipment himself.

This process continued for many years, and it got to the point where Gil and Andre had a secret gym full of quirky and unique handmade equipment.  A conversation one day between Gil, Andre and his CEO Steve Miller (a former founding board member of Nike) about potentially taking this equipment and properly engineering and manufacturing them for mass consumption was the catalyst for the BILT by Andre and Gil brand and range to be born.

The BILT range has only recently hit the market, but I suspect it will not be long until they are common fixtures in gyms across the country and globally. Having highlighted just a couple of the pieces of the BILT range does not do it justice, nor could writing about all of the range of equipment.  You simply have to experience it yourself.

Having heard that orders and sales of the BILT equipment have already greatly surpassed everyone’s expectations at BILT, I have no doubt that it won’t be too long before you are nestled into one of these great pieces of workout equipment at your gym, be it in Beverly Hills or Melbourne Australia, and having a little daydream of being the latest of Gil’s superstar clients.