When it comes to being a ‘sports dad,’ Adam Mills has been extremely influential in his children’s lives.  His dedication has led his son Austin to not only reach his potential, but surpass it, as Austin is playing point guard at Pepperdine University.  While some sports dads have created a rift with their children by pushing them too hard, Adam has figured out the right balance to encourage Austin to drive himself beyond his limits while not discouraging him from athletics. 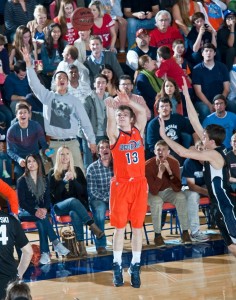 Adam grew up a gym rat during the John Wooden days at UCLA.  He was a star basketball player on the high school level, but an ankle injury prevented him from playing at the University of Texas.  Even though his basketball career ended before it could take off, he has stuck around the sport for years, as he manages UCLA’s summer pro games, where several NBA players come to play every year.

As a father, Adam is proud that his son has followed in his exact footsteps.  Austin has also been a basketball junkie since a young age.  Adam has created an environment that has allowed Austin to flourish, but he has kept enough distance from his son’s basketball career to avoid burning him out.  While many sports dads try to push their children like they are professional athletes, or punish their children for mistakes, Adam knows when he needs to take a backseat.

“I think I’ve pushed, like a lot of dads do,” Adam said.  “You have to find times to back off and times to push again.  I don’t coach any of his teams, and I don’t pressure the coaches.  I stay out of it and let him find his way, so he has to struggle some and realize that it is not all going to be handed to him.”

As a six-foot-tall point guard, Austin does not have freakish measurables.  However, Adam has believed in his son’s abilities for years, and he has done everything in his power to put his son into a position to excel at the highest level.

“Being a six foot guard who is not the super star that everybody is hyped about, we’re consistently in that battle for everybody to believe,” Adam said.  “That’s what we’re going through together.  It’s almost like he and I against everybody.  That’s a really close bonding thing.”

Austin has beat the odds time and time again, and Adam is the one guy who has been with him every step of the way.

“I’m so proud of him,” Adam said.  “He’s playing D-I college basketball.  He had huge games against Gonzaga.  They played the No. 1 team in the country and he had 10 points, five assists, and five rebounds.  He’s amazing.  The work that he’s put in, the hours he puts in.  He’s doing three-a-days now because he wants that starting spot next year.  He lifts weights at six in the morning, and then he goes to workout with Cuttino Mobley (10 year NBA career) at 9 a.m.  And then he plays with the NBA guys in the afternoon. He puts in a lot of hours and it shows.”

Like any parent who is a former athlete, Adam is on pins and needles when watching his son play.

“I’m usually extremely nervous,” Adam said.  “Not for me, but I just want him to do well.  I feel every up and down with him.  It’s really just about him being happy, but also letting him struggle through the hard times.  Because if I smooth everything over for him, he’s not going to get any better.”

Austin greatly appreciates the support that he gets from his father, and he notices when Adam is getting really nervous.

“About 99 percent of the time it is amazing having him there, and then there is one percent of the time where he begins to worry too much,” Austin said.  “I know that he does that because he cares.  But knowing that anything that I do, at the end of the day, he’s supporting me.”

When Adam played he was always pretty calm, but it is a totally different dynamic when he watches his son play, because Adam does not have any control over what happens on the court.

Adam has avoided trying to make Austin into the player that he was when he was at that same age.  Adam was more of a fighter who took charges and would dive into chairs to get a loose ball, but that is not Austin’s game, and Adam has not tried to force that on him.  Because Adam has recognized their differences, he has allowed Austin to find his own path.  Adam understands that he cannot force Austin into basketball all the time because that could foster disinterest in the sport, and it could also ruin a great father/son relationship, something Adam has seen with other sports families.

“I do see some relationships get damaged, and I feel it, because once in a while he’ll blow up and he’ll say that there is too much pressure, and then I realize that he needs to get out and have fun with his friends,” Adam said.  “He needs to get a break from it, or he’s going to be buried.”

Austin believes that having Adam as a sports dad has made them  closer.

“We have a really close relationship,” Austin said.  “Mainly because we go everywhere together.  We have always gone to the gym together and put up shots.  I feel that basketball has brought us really close.”

The two go to the gym often to shoot around, but it usually turns into Austin taking the bulk of the shots while Adam rebounds and feeds him the ball.  They do compete at times, and Austin laughed as he said that he can beat his father in a shooting contest.  But their relationship is not only about basketball.  As an outlet, Austin works on his skills as a DJ, and he has started a clothing line.  Even with his off the court endeavors, Adam is still his son’s biggest fan.

“I’ve really been supportive of him trying what ever he wanted to try,” Adam said.  “He did it with his own money, he bought a car and fixed it up, drove it for a while and sold it.  Just an entrepreneurial thing at this age is really important, and I have supported that all along.”

Adam feels that he has influenced his son the most by setting a great example.  Because the two spend a lot of time together, Austin has a mentor to pattern himself after.

“He has it in him to always do the right thing, but I really hope that I have shown him by me doing it, and by treating everywhere he’s been, and everybody who has been loyal to us, to be the same way to them.  He has that more so than I do now,” Adam said.

While many father and son/daughter relationships have become strained because of sports, for the Mills family, sports has bonded them together and allowed their relationship to grow.  They are a father and son who truly enjoy spending time together and working toward the same goal.  Like any father, Adam wants to see his son excel on a higher level than he did, and with the right tutelage, Austin is reaching new heights.