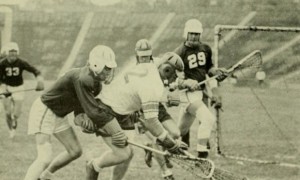 While many sports have storied pasts and debatable origins, lacrosse came directly from the Native American game of stickball. Lacrosse, known for the netted lacrosse stick and rubber ball, started with a more basic stick and wooden ball, and much like all technology has become more advanced over time.

There are two theories about the origin of the sports name. One theory suggests the name “lacrosse” replaced the Native American name, “stickball” when Jesuit priest Jean de Brebeuf remarked the sticks reminded him of the crosier carried by bishops during the time period. Stickball became la crosse later transforming into the name we all know: lacrosse. Another theory suggests the French used the generic name crosse, translating to bat or stick to describe the equipment that the Native Americans used.

While the game as we currently know it has a thick rule book, the original game was not quite as complicated. The games were played in huge open spaces with no specific field and no limit on participants.

The only rules: no hands and no boundaries.

These games could span over many miles and last for days on end. Since the early days of the game had no limit on players, some suggest thousands of participants would compete in one game. Much different than the 10-player limit of its current form.

The games were convened for both warrior preparation as well as recreation. It was not uncommon for the games to take on a gambling component as well with bets placed on the outcome.

Our neighbors to the North took notice of the game, and Canadian dentist Dr. William George Beers is credited with bringing the game to Canada. In 1866 or 1867, depending on which historical account is correct, he created the first official rulebook for the game.

The game gained popularity in England with Queen Victoria’s famous line in 1876 stating, “The game is very pretty to watch.”

For more information on the sport visit: www.uslacrosse.org