Origins: The History of Kayaking 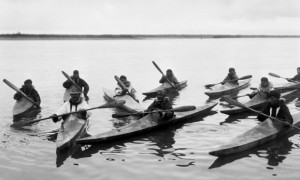 If you know anything about kayaking, a familiar term is the Eskimo Roll. Kayaks are built to easily flip back over in case the boat capsizes. This maneuverability served as an important safety feature to protect the hunter from being submerged under water or from having to exit to the boat. This feature was critical, because many Eskimos couldn’t swim. Seem a little weird when you’re surrounded by water? Well, it was impossible to learn to swim in a place where hypothermia would set in within minutes of submersion.

The stealth nature of kayaks was perfect for these hunters, because the boats were easy to maneuver to hunt prey. They were constructed out of covered wood or whalebones with stitched sealskin to protect the outside with whale fat for waterproofing.

To improve buoyancy, they would place seal bladders filled with air into the front and the back of the boat.

The earliest forms of the kayak developed in Alaska, Northern Canada and Southwest Greenland, where boating was necessary to hunt, and protection from the elements was imperative. By the mid-1800s, this watercraft innovation found its way to Europe and without the necessity to hunt, men started kayaking for sport. 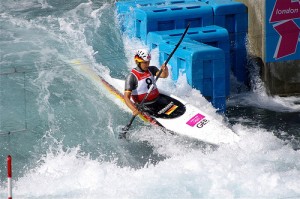 The sport joined the Olympic ranks in demonstration only in the 1924 Olympics. In the same year, the Internationale Repraesentantschaft fur Kanusport (IRK) became the association for kayakers and was later succeeded by the International Canoe Federation (ICF) in 1946. According to the ICF website, their goals include forming a link between associations around the world, organizing competitions, providing river guides and providing internationally recognizable symbols for touring.

Kayaking transformed once again in 1931, when Adolf Anderle was the first kayaker to go down the Salzachofen Gorge, and with that, whitewater kayaking was born.

Shortly after, in 1932, Canoe slalom (which utilizes kayaks), modeled after the ski slalom, began in Switzerland.

Initially, the canoe was performed on flat water but the sense of adventure took hold, and competitions were soon held on white water rapids. 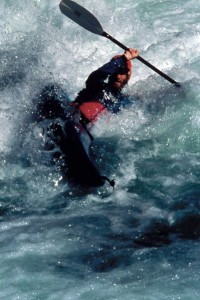 In 1936, kayaking became a full-medaled Olympic sport. In the 1950s, fiberglass boats were introduced and the technology advanced still to create the rotomolded polyetheylene plastic in 1973. As the boats evolved, people began realizing the capabilities, and eventually freestyle kayaking became more and more popular. The technology of the transformed kayak allowed its users to move faster, make more defined turns and have better overall control of the boats – a necessity when dealing with Class V rapids.

Kayaking hit another milestone in 1992 when slalom racing joined the Olympics ranks in Barcelona, and has been a much-revered Olympic Sport ever since.

Although some use kayaking and canoeing interchangeably, the sports have distinct differences in the way the athlete paddles and sits. In the canoe, the paddler uses a single-bladed paddle and kneels. In a kayak, the paddler sits and uses a double-ended paddle.

For more information on the ICF, check out their website here.