United States obesity rates are leveling off, according to data released by the Centers for Disease Control and Prevention earlier this month. The research also found that the proportion of obese, 2-4 year-olds from low-income families dropped slightly this year after 30 years of increases.

Although many researchers and health experts were relieved to hear the aforementioned trend, obesity rates for U.S. adults remain at a historically high 36 percent and current predictions are bleak.

Evidence gathered by a team of sociologists at Columbia University suggests that Americans born in the 1970s and 80s will suffer higher premature death rates than older Americans.

For the first time in American history, the current generation of youth is not expected to live quite as long as their parents as a result of rampant obesity.

Over the last 30+ years, there has been a significant increase in extreme obesity among adults, according to the annual “F as in Fat” report from health nonprofits Trust for America’s Health and the Robert Wood Johnson Foundation. Defining “extremely obese” as individuals who are more than 100 pounds overweight, they found an increase from 1.4 percent of the adult population in the late 1970s to 6.3 percent in 2009-10, a 350 percent increase. 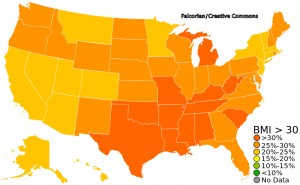 Body mass index or BMI is typically used to measure obesity and can be calculated by dividing one’s weight (in kilograms) by one’s height (in meters). A BMI score of 25.0 to 29.9 is considered overweight, while 30.0 or above is labeled obese.

For whatever reason, men have “gained” on women in the obesity department over the last ten years. According to the report, 33.4 percent of American women were obese compared to 27.5 percent of women 10 years ago. Now, each group stands at nearly 36 percent, with women holding only a narrowly higher rate.

Despite all the alarming information, various health experts have credited government initiatives – making school lunches healthier, requiring caloric counts on menus and discouraging soda consumption, among others – as being effective in leveling the country’s obesity rates. That said, no one is pleased with the current obesity rate and its effect on quality of life.

If obesity rates are to start decreasing, much work would need to be done. The CDC report recommended strengthening programs like the ones mentioned above, as well as holding food and beverage companies more accountable for what they market to children, encouraging walking and biking as a viable form of transportation and enabling people of all neighborhoods to buy healthy, affordable food close to their home.