Doctor and Patient to Compete in Redman

Chance Leonard probably should have never been able to jog again, let alone be able to say he is an Ironman. Earlier this year, we took you within his journey through many painful, traumatic surgeries on his spine to enduring and completing Ironman Arizona. If you haven’t read his story yet, go here and read it now.

However, this story isn’t really about Leonard. At ATLX, we spend a lot of time focusing on the athletes behind the athlete. The strength and conditioning coaches, the nutritionists, the doctors, and that’s where this story really begins. Leonard took on the challenge of multiple surgeries and recoveries with his neurosurgeon, Dr. Robert Remondino, and now together they are taking on a new experience. On September 21, 2013, the two will compete in the Oklahoma City, Okla. Redman Triathlon in hopes it’s the first of many leading to Kona.

The athlete behind the athlete has never rang more true than Dr. Remondino. Leonard credits his ability to compete to this man, and now he will be competing against him.

“To be able to come back from the experiences I’ve had, I know I owe all of my athletic accomplishments to this point in the sport of triathlon to his skill set,” Leonard said of Dr. Remondino. “It’s very humbling to know I have such an advocate on my side who cares about me as a person and the lifestyle I want to live. His expertise has allowed me to do this.” 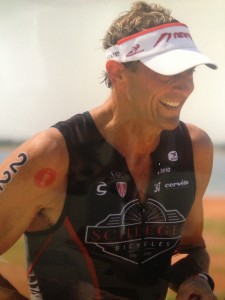 Dr. Remondino is able to understand Leonard’s desire to compete despite injury after injury because he too has fallen in love with triathlons.  “I just love doing it…[I train with] a great group of guys,” Dr. Remondino said. “Wednesday nights and Saturday mornings is boy’s time, and we get together to train, and we go together and ride and run after.”

It takes a special type of person to understand the passion of wanting to recover from surgery just to suffer again by taking on Ironman. Fortunately, for Leonard, he has someone also crazy enough to want to compete in triathlon and intimately understands the desire to recover and race.

“There is a lot of obsessive compulsive personalities. You’re talking to two of them. Everybody is part of it. That’s the great thing about triathlons. It’s just the people that are in it,” Dr. Remondino said. 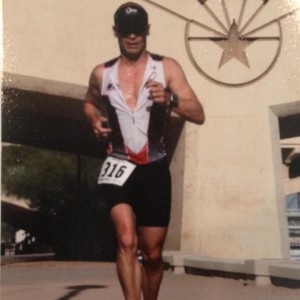 Obsessive compulsive is probably right. But what Dr. Remondino understands from being a competitor himself is the therapeutic nature of triathlons. Leonard, who has suffered more injuries than most humans could endure fully agrees, “My body hurts worse more when I don’t train. If I’m lazy and not doing any type of physical training, I hurt worse. The mental part of it is really important too. It really helps clear my mind, and gives me a sense of accomplishment.”

Dr. Remondino has been competing in triathlons for over 25 years, and in the Redman Triathlon every year since its inception. Not only does he compete, he’s pretty darn good. “Don’t let him sandbag you about not being an athlete,” Leonard said of Dr. Remondino. “He consistently finishes on the podium, one, two or three every year.” 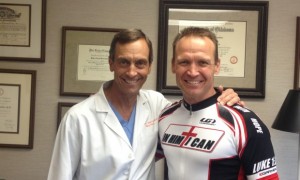 Leonard, a college wrestler at Oklahoma University, is pretty talented himself. While it is a friendly competition, don’t expect either to take it easy on the other. Triathlons are incredibly physically challenging, and it’s not a sport where you don’t put your heart in it. So there will be competition, but at the end of the day, whoever wins, it’s about the camaraderie and friendship Leonard and Dr. Remondino have developed over the many years of Leonard’s surgical care.

Two people who share the love for competition and for punishing their bodies through Ironman races is rare. Doctor/patient training buddies is even more rare, and Doctor/patient competition is nearly unheard of. This is the type of story made for the Kona Inspired.

“Kona is obviously the Mecca. That would be a great experience. We will have to do a few longer distance races, but if Ironman wants to come and have a great story, they could let us in next year,” Leonard said.