Marching Band: The Other Athletes on the Field 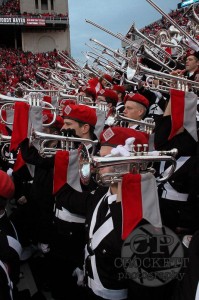 When legendary Ohio State coach Woody Hayes touted Ohio State as having “The Best Damn Band in the Land,” he wasn’t just referring to its musicality. While his football team was doing two-a-days in the hot summer heat, he noticed the band was on the field both before his players arrived and after they left.

“What we do is physical, but it’s also very cerebral,” Waters told ATLX. “They have to remember the music, they are moving at a high speed and working at a high level of physical activity. And they’re doing that in the context of the people around them.”

“Our marching style is very physical. Especially on a hot day, our kids are dripping with sweat just like any athlete doing intense physical things would be in that regard,” Waters said.

Although summer preparation is technically non-mandatory, the OSU marching band gives aspiring members an opportunity to prep for tryouts with a heavy dose of musical and cardio activities. “We have a grueling four-day tryout process here,” Waters said. “It’s all about the physical conditioning and getting ready for those tryouts.”

Competitive high school bands must also use their “brains and brawn” to be successful.

Every year, the Palisades High School Marching Band (Pacific Palisades, Calif.) holds a two-week band camp before the school year begins, according to band director Arwen Hernandez. The period is designed to make sure the band is adequately prepared for the rigors the upcoming season promises to bring.

“There’s a lot of physical demands, there’s musical demand, there’s precision requirements, and physically it’s very taxing,” said Hernandez, who will be celebrating her sixth anniversary with Palisades this February.

“And when it becomes taxing, you lose that precision,” she added. “You have to become physically strong so that in those moments in your show, you still have the precision.”
On the first day of this year’s band camp, Hernandez’s crew ran over a mile for conditioning. Each day, the band gradually increased its distance until the end of camp.

In addition to the required running during Palisades rehearsals – the distance can reach up to a mile per rehearsal – the core is emphasized.

Assistant drum major Sarah Bonder said, “To hold up an instrument and use your lungs, the upper part of your body has to be in really good shape.”

Bonder, currently a sophomore, plays the baritone, which weighs about 10 pounds. A tuba weighs approximately 30 pounds. That’s not even the worst. According to Waters, tenor drums are around 60 pounds.

In order to build and maintain good posture that will last during a grueling nine-to-10-minute performance, the Palisades band does a great deal of planking, along with push-ups and crunches in its rehearsals. If it’s not already obvious that marching briskly for 10 minutes while carrying as many as 60 pounds is exhausting work, scientific research has proven it to be true.

Consider this: In 1993, after conducting a study that measured a drum corps member’s heart rate and oxygen consumption, an Indiana University professor found “the same type of numbers I would expect to see from very good athletes in the middle of a marathon.”

The same professor, Jeff Edwards, concluded that a typical marching band performance is “every bit as much an athletic event as it is a musical event.

Palisades senior Olivia Arback, who has played in the band since her freshman year and currently serves as the tuba section leader, certainly agrees that band members have to be athletes. “Definitely, because there have been people in band who have ended up quitting because they weren’t as physical as the sport demands,” said Arback. “You definitely have to be in shape.”

Proper fitness is essential, because if it’s absent, the quality of a band’s performance will very likely be compromised.

If members of the band are out of breath during a performance, the sound will suffer. “They’re running around a football field, usually at upwards of from 120 beats per minute to 180 beats per minute,” said Palisades percussion instructor Jamie Strowbridge. “So not only are they doing a cardio activity, where air is at a premium, but they also have to put wind through their instruments to create a sound. You can hear them getting tired. It affects the sound.”

While the physical training involved in marching band may remind you of a typical sports team, the similarities don’t end there. Teamwork and camaraderie are absolutely required. 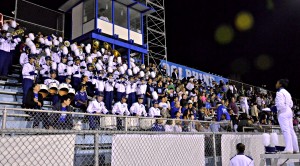 It’s true. Every member of the band will be seen and heard by the public…and the judges.

For that reason, members have an incentive to help one another improve. “We all have to be really supportive of each other and try to make everyone really confident,” said Bonder.

According to Hernandez, the Palisades band includes students ranging in age from as young as 13 years old all the way up to 18. Their level of starting physical fitness – before they become acclimated to the training – also varies widely. “Some of them are in cross country. Some of them have never been apart from their video game controller for more than two hours in their lives,” said Hernandez.

Such a group of diverse individuals come together over the course of a year in pursuit of one common goal, winning competitions.

In three full years with the band, Arback has also noticed this trend: “In the beginning, you’re just kind of focusing on yourself, but then near the end of the season, it’s like you all have to work together to create your show. We just spend as much time as we can together, so that we can create a unit, like we’re one force.”

Not everyone understands the physical commitment that goes into being a member of a marching band, as some have expressed their confusion as to why Palisades band students receive PE credit. By now, the band’s members and staff have grown accustomed to hearing that question.

Regardless of what’s being said directly to them or behind their backs, they continue to go about their endeavor with a relentless passion.

“We’re making sure that they’re getting movement education [and] cardio training,” assured Hernandez. “We want to keep that contract with the school. They’ve told us, ‘Ok, you can have PE credit.’ Ok, we’re going to make sure our kids get physical training in.”

The lack of respect may even serve as motivation for some.

On occasion, the band runs around the track while the football team practices. “They’re obviously looking at us sometimes,” noted Bonder. “Me, personally, I feel like I have to step my game up to show them, ‘Hey, we actually do things.’”

Whether you realize the physical commitments of band members or how much athleticism they truly possess, one thing is for certain. The band should be credited for making high school and college football unique.

Waters says it best in regards to college football, although his words are just as relevant to the high school level, as well.

“College bands provide a unique flavor to college football, and that’s why in my opinion, college football is better than pro ball,” Waters said. “The college band brings that atmosphere and the student side to things.”

Why do Americans love college and high school football so much? Complementing the pageantry and tradition, it’s the competition and the hard work and sweat of every athlete on the field, not just the players. The cheerleaders, the majorettes, the band members and the mascots are all athletes who make up the fabric of this celebrated pastime.