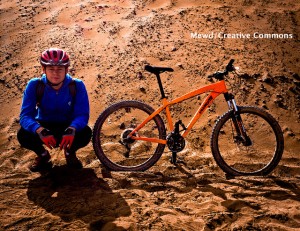 There is a healthy amount of debate involving the origin and creation of mountain biking. The modern bicycle made its first appearance in 1885 and it’s impossible to know how many years it took for a brave cyclist to take his or her ride off the road and into the wild. Perhaps the history of mountain biking can be better illuminated by following the development of the specialized bicycles used across the countryside than the activity of riding itself.

Much like many technological advancements, military use played a large part in some of the first bicycles modified for off-road use. Led in 1897 by bicycle infantry advocate 2nd Lt. James A. Moss of the United States Army, the 25th Infantry Regiment was tasked with the challenge of a 1,900-mile trek over the unforgiving American West to prove the utility of such a band of bicycle riders. The all-black regiment, known as the Buffalo Soldiers, completed the ride by arriving in St. Louis on its 40th day to mark a resounding success. But the Buffalo Soldiers were not without help from some of the most advanced bicycles of the time.

American company A.G. Spalding & Co. received input from Moss prior to the trip and produced a 32-lb. marvel for the Buffalo Soldiers. The bicycles included steel rims and puncture-proof tires to handle the stress of the rocky landscape while placing the gear mechanisms inside an enclosed case to protect the chains from plentiful dust and dirt.

A little over fifty years later, French bicyclists sported increasingly modern modified bikes for their off-road, velocross racing. The twenty or so riders, together called the French Velo Cross Club Parisien, showcased their technical expertise on the bicycles, converting suspension forks from mopeds and adding derailleur shifting on the handlebars, while also reinforcing the frames and providing a substantial amount of braking power.

Around the same time in 1953, Californian John Finley Scott created a bike he called his “woodsie,” complete with big, knobby tires, straight handlebars and powerful cantilever brakes. Twenty years later and about 100 miles south of Scott’s home in Davis, Calif., the Morrow Dirt Club convened weekly to tear through the narrow fire roads of Cupertino, Calif. These riders put together “klunkers,” bicycles incredibly similar to Scott’s design that featured the same BMX-style, flat handlebars with front derailleurs on a fat-tired cruiser frame. The club drew a fair deal of attention for their klunkers at a cyclecross race in 1974 in Marin County, Calif., and soon after riders in the state began mimicking the bike design. 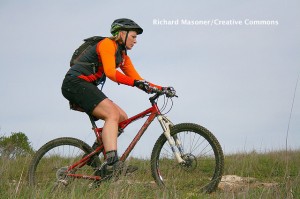 For years after the Marin County cyclecross, bicycles were modified in an independent spirit on a small-scale basis, but by 1981 the mass-produced mountain bike had arrived. The aptly named Stumpjumper, created by California-based company Specialized and produced in Japan, marked the first mass-production mountain bike in the world. The Stumpjumper satisfied the needs of those pioneers on the trails in the 80s and continues to be made and raced today, although with a greatly improved design. The bike made such an impact on the sport that the Smithsonian Institution in Washington, D.C. houses an original Stumpjumper.

Since the mountain bike steadily became more accessible across the United States and the world, the sport has grown substantially as a weekend activity. The variety of riding disciplines has grown over time as well, from the early days of cross-country and trail riding to freeriding, dirt jumping, trials, slaloms and long-distance touring. Usually isolated deep in the countryside, riders can thank a long and continuing development of mountain bike technology to keep them safe and on two wheels on and off the trails.