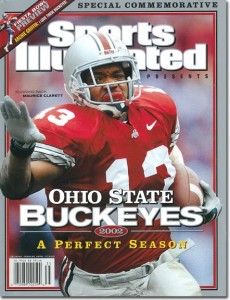 The name Maurice Clarett tends to garner a strong reaction from college football followers in one way or another.

Miami Hurricane fans can specifically attribute their 2002 National Championship folly to Clarett’s touchdown in the second overtime, which gave Ohio State the title.

If you are a diehard Buckeye, you may still be thankful for the day he stepped on campus for his part in OSU’s first National Championship since 1968. Or maybe you shake your head in disgust at the blemish he added to the school’s name amidst accusations, arrests and scandals.

Whatever you feel toward Clarett, he doesn’t have the time or energy to spend a second worrying about it. This is Clarett 2.0. Post-football, post-incarceration, post-immaturity. Now, the former OSU tailback-turned-inmate is out and intently focused on improving himself. He’s set his sights on new challenges, including competing in the Rio de Janeiro 2016 Summer Games as a member of the U.S. rugby team.

Clarett spoke with ATLX about his incarceration, his plans to play rugby and about meeting his idol, Warren Buffett.

Ohio State wins the championship in 2002, and you were a major part of that. What went wrong from there? 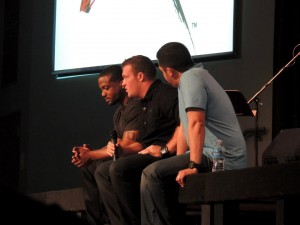 I say this all the time. I just was a young guy. I don’t believe at the time I had enough information or the character to sustain the position that I was in publicly.

It was basically continued behavior as a kid that I never corrected. So you’re in a space where you’re magnified times a million, because you’re on the Ohio State football team and you’re still acting or operating as if you’re just hanging around on the corner. Me, coming from Youngstown, Ohio, I thought that was what the world consisted of, and I didn’t understand that I was operating wrong, just because it’s all that you know.

So you were suspended from Ohio State and attempted to go pro early, you appealed to go to the NFL, and that fell through, and you were arrested. Was that a turning point for you?

It wasn’t really that simple. Of course, during the incarceration and after being arrested was a turning point. I think anybody who is put in a position where their life is dramatically changed from what they are used to – incarceration and death are probably among the top five greatest fears of anybody. [The incarceration] most certainly caused a shift in my thinking. It caused me to reevaluate my situation, the direction I was headed, and mostly the people I had affected through the decisions that I made.

How did people react or change toward you after you were imprisoned?

You hear things like ‘I hope you get your life back together’ or ‘hold your head up,’ but no one really knows what to say. But it was all still very much appreciated.

Obviously imprisonment is a huge motivation to change your life, but if you look at the numbers, the recidivism rate is incredibly high. How have you stayed successful when others haven’t?

It’s because of my preparation, along with the support and the resources that I took advantage of when I was released. 100 percent, I had a sense of what I would do when I was released. I had a plan A and plan B and plan C. There were things I wrapped my brain around and clearly saw myself doing once I got out. I think these things had become so embedded in my brain to become successful. Once you set yourself up for it, you can be successful to your life. 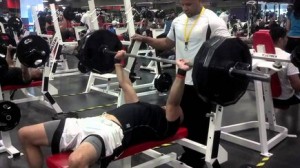 Things like the Omaha Nighthawks and the friends in my life have helped. The fact that I got to meet Warren Buffett when I read all about him when I was incarcerated. And then I had a chance to sit with and chat with him for three hours. There were just so many other things that I willed myself and I prepared myself for so much when I was [in prison].

And I’m not the only one. I just happen to be a notable guy that the world happens to know just because I’m Maurice Clarett, but there are a lot of guys, be it federal prison or state, who have made it once they got out, but no one knows of because they don’t have a notable name.

But it’s just like anything else. If you don’t prepare yourself in college for the world after, nothing is going to happen. If you don’t do anything in the offseason, no matter what sport you play, during the season those same results will manifest themselves at some point.

What I’m doing now is disciplines that I decided to take on while I was incarcerated. The effects of the discipline that I took on is what’s being displayed right now.

So getting back into sports…was that always on your mind? 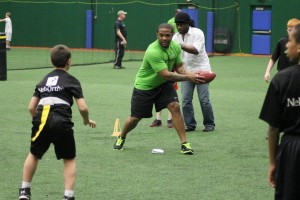 I always wanted to compete, my heart always wanted to, but I never saw a viable outlet. Prison is a very competitive environment, so the sport activity goes on year-round, and I had a chance to stay in shape doing that.

The idea to play Rugby stemmed from prayer. A guy on Twitter reached out to me and said, ‘Hey, have you ever thought about playing rugby?’ I just felt like it was either a prayer answered or even something just in front of my face that I needed to give energy to. He said, ‘There’s a guy in Columbus, Ohio,’ and from that initial call, I explored the opportunity in Columbus.

At the time, though, I was shooting “30 for 30,” and speaking at schools every couple days and doing nonprofit work back home. I had a [charity] basketball game back home with [Former OSU Football Coach] Tressel, [Former OSU running back Daniel Herron], myself and a bunch of guys who played in the NFL, so the timing of [rugby] didn’t work. Eventually I was able to get into it though.

It came from there. After going to a few practices and running around and seeing the same skill set and picking up the game, I became comfortable with it.

What do you think of rugby?

I believe it’s the same thing when you break down the mechanical movements. The skills are slightly different, but I believe football was birthed from Rugby. When you’re a little kid, you throw the ball up and everyone is running around.  The older I get, and the more I play, the more I see it. It’s a lot of weak-shoulder tackles, a lot of stiff arms. It’s a lot of parallels to football in its essence, and when I went out there a few days, I didn’t see too much of a difference outside of the ball stopping.

It’s pretty undeniable that you were an incredible football player. How much does that translate to Rugby?

At the end of the day, you can’t disrespect the sport. To be good in anything, you need to learn the skills of it and the nuances and that’s my hope is to learn those skills and nuances, and you can only get that from playing. I’m just going to bring to it the same mentality and the same work ethic and see where things go from there.

Is it true you have your sights on the Olympic rugby team? 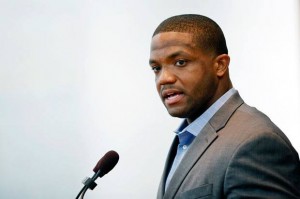 I think no one starts out in any industry who doesn’t want to go far. You don’t hear a high school football player say, ‘Hey, I just want to play high school and stop.’ As a kid, you say, ‘I want to get to highest platform.’ Understanding my story and understanding the process, I think the Olympics is a great goal to chase after and also to inspire other people. 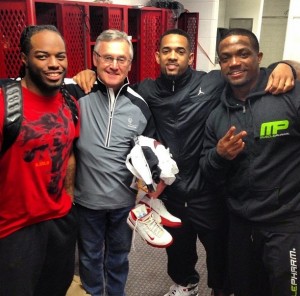 I don’t know. I’m too busy working to know. I’m a firm believer in budgeting your time and budgeting your money. I picked up those two things from philosophies of Andrew Carnegie and Napoleon Hill, and I don’t budget my time for criticism or to even hear about it.

That’s not to sound smart or callous toward the situation. The only thing I understand is work, and that’s the process, and whatever happens after that, happens. But it doesn’t matter. The only thing that matters is that I stay true to the disciplines and goals I’ve set for myself.

Tell me about meeting Warren Buffett.

When I was in prison, I thought a lot about what I would do outside of football once I was released. It came to me that I loved numbers, and I loved business and enjoy everything that encompasses the entire finance world.

Throughout the process, I read that he was from Omaha. As fate would have it, my coach in Omaha was also the CEO of Ameritrade for nine years, but he gave up the investment world to be a football coach. We were at the golf course one day and he asked me my life story. After explaining my story, he said, ‘I’ve never asked Warren for a favor in my life, but we’re good friends. Do you want me to see if he’ll meet you?’

Warren gave me a call – I knew it was his voice right out of the gate- and he said, ‘Do you mind coming down on Saturday?’ So I went down and just chatted with him. I felt like I knew him already from reading so much. We just had a good conversation.

From my preparation and discipline [in prison], I felt like I had the confidence when I sat down and we verbally jousted for three hours. No matter how high or low you think you are, there are always similarities in all people. Everybody has the same stories or the same troubles, but we are just at different progressions or in different fields in our life.

It gives me a lot of belief about fate. It shows me nothing is impossible.

I don’t think it’s by accident. It’s because of strict discipline in how you live your life.

Football Maurice Clarett Rugby 2013-12-24
atlx
Share !
Previous: Paralympian Walker Won’t Stop at Anything
Next: Eric Byrnes: From the MLB to the Ironman