CrossFit has become more than just another workout program, it has become a movement. And for one simple reason…

CrossFit incorporates a whole lot of everything. During a single CrossFit workout, athletes, whether they are competitive are just people looking to improve their fitness level, fling barbells over their head, perform pull-ups at high speeds, and suspend themselves off of the ground with gymnastic type exercises.  This type of program has broken more conventional models where people will either lift weights, or do aerobics. 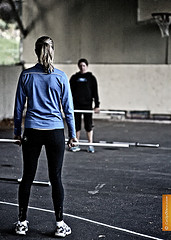 “Traditionally when people go to the gym and lift weights, they do more isometric movements,” said Brian Jaffe, Co-Owner of Cave CrossFit in Los Angeles. “So you’re breaking up the body into different pairings. For example, one day they’re going to work on arms, and maybe their chest. Maybe back or legs. And they’re going to be doing movements that causes the muscles to become larger. Which is not making it functional. That muscle is getting stronger, but the body as a whole is not getting stronger.”

Unlike many other typical workouts, CrossFit uses functional movements, movements that are performed during athletic performances, as well as in everyday life. The movements are continually varied, similar to movements in a sporting event, or real life movements.

“The way that CrossFit differs from that is that we’re using whole body compound movements,” Jaffe said. “That’s the definition of a compound movement. Deadlifts, squats, clean and jerk, snatching. Those are Olympic lifts. They’re using the whole body, meaning multiple muscles groups. And there is also a speed and velocity that the isometric movements do not have.”

The trend is catching on. Elite athletes from nearly every sport have incorporated various aspects of CrossFit into their workout program, contributing to CrossFit’s popularity among fitness enthusiasts. Jaffe said that the bulk of the people who are doing CrossFit are people who do not compete in sports, but people who just want to get into better shape.

“The majority of our clients are people who literally want to get their lives back,” Jaffe said. “Just to go throughout their day with more energy.”

Those who follow the program are seeing great results. Jaffe has seen clients lose up to 20 pounds in just 30 days. And he pointed out that his clients have said that they have more energy to perform everyday task, such as something as simple as picking up the groceries and taking them from the store to the car. 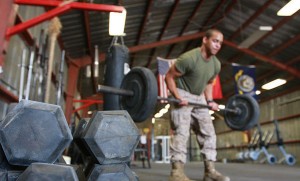 CrossFit makes simple tasks easier because it is functional training. The deadlift is similar to picking up bags of groceries off of the ground. Farmers carry, an exercise where a person picks up weight and carries it over a set distance, is similar to carrying groceries from the store to the car. Lugging groceries is one daily task that most people dread, but when the body is in shape, those type of tasks become much easier.

CrossFit looks intimidating at first glance considering many of the movements look nearly impossible for anybody who has never tried them, however, that should not discourage anybody. Trainers will modify and scale the workouts, from the reps to the weights, according to an individual’s fitness acumen.

Jaffe has seen several men and women come in without being able to perform a single pull-up, but it was not long before they could perform several with strict form. 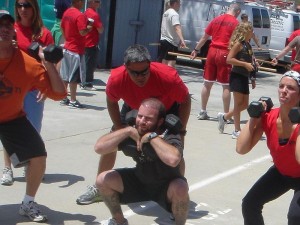 As much as CrossFit is an exercise program, it also has a social component.

“When you’re joining a CrossFit gym, you’re not just joining a gym,” Jaffe said.  “Actually we call them a box. You’re actually joining a community. Each one has a distinct community, where it is really about supporting one another to achieve their goals, whether it is inside the box or out…It has really created a community that goes beyond the confines of a workout.”

When CrossFit first hit the scene, it looked like one of the many workout fads that come and go. But people have seen serious results, and an improved quality of life, not only allowing CrossFit to stay, but growing it into one of the best workout programs around.