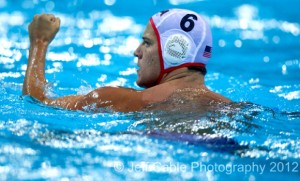 The training that the USA Water Polo team goes through on a daily basis is so brutal that the only fair comparison is the type of training that a Navy SEAL endures. That might explain why water polo athletes make it through Navy SEAL training at a higher rate than participants from any other sport.

A typical day for a Navy SEAL trainee parallels that of training day for Olympic water polo players. Shea Buckner of the USA Men’s Water Polo Team – and  former member of two NCAA National Championship teams while playing at the University of Southern California – described a typical Tuesday for his team. 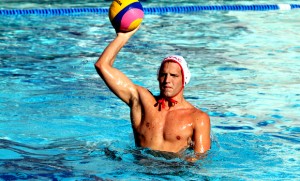 The first two hours are spent in the weight room executing squats, deadlifts, bench press, sits ups with medicine balls, pushups, pull-ups, and various strength training sets. After pounding the weights, a session they knock out four days a week, they go immediately to the pool for a two and a half hour workout. Breaking into two groups, one does the swimming portion of the workout and the other does the conditioning portion.

The first group tackles 6,000 yards in the pool, from freestyle to backstroke to breaststroke. Meanwhile, the other group straps 15-pound weight belts on, running through drills like treading water, throwing the ball around, and wresting with teammates. The ball used during this portion of the workout weighs five pounds, approximately twice as heavy as the typical water polo ball.

After the two groups have finished their first portion of the workout, they switch and complete the other. For most athletes, even on an elite level, that would be a wrap for the day.

Not the case for water polo players.

“That was just our morning,” Buckner laughed.

The team starts round-two off by swimming 5,000 yards. By now they’ve amassed 11,000 yards in one single day. That’s about seven miles. And, “that’s just straight swimming,” Buckner said. “That doesn’t include the water polo work or conditioning that we do. That’s just laps and sprinting.”

The evening session involves more work with the weight belts, an emphasis on specific water polo skills, and practicing as a team. The team works out in this fashion six days a week, taking only Sundays off.

“The training that we do is crazy,” Buckner said. “Seven hours, every day. And it’s conditioning. Our sport is always conditioning.”

Conditioning is of great importance in water polo because of the nature of the game. Aside from training, the actual game itself is a grueling athletic endeavor. The hour-long game takes place in a 9-foot deep pool. “It is a 30-meter course, and you have a 30-second shot clock,” Buckner said. “When you’re on offense, you’re trying to throw a ball into a cage, with a defender that’s trying to drown you, and you cannot touch the bottom.”

Actually, players can touch the bottom during a game, but that is not where anybody wants to be.

“You can go down to the bottom and touch it, but the problem in our sport is that if you do, somebody is going to be kicking you, and punching you, and kneeing you in the face,” Buckner said. “If you put your head underwater, you’re going to pay the price. That is not something that I would recommend.”

Because of the sheer size of water polo athletes, we wouldn’t recommend it either. 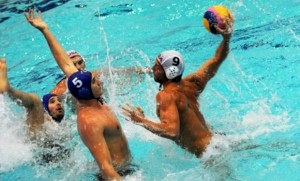 The size of the average water polo athlete?

They are naturally big. Then they lift weights four times a week, for two hours each session, and many of their movements are Olympic type lifts. So it’s easy to see why these guys avoid going underwater and taking a kick to the face.

As fit as these players are, it’s still a daily grind.

“The biggest struggle is having to finish a workout around 12:30, and then having to be back six hours later,” Buckner said. “You really have to get a massive amount of food in your system, and then lay down. Get off your feet, and drink lots of water. It becomes vital that you monitor your nutrition.”

Advice From A Pro 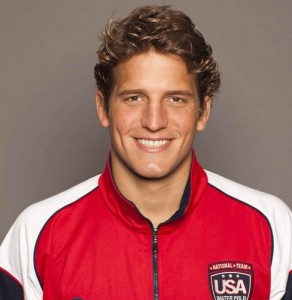 He begins with a disclaimer:

“This will be extremely tough to do for somebody who is not a water polo player.  Actually, it would be next to impossible,” Buckner warned. And make sure a lifeguard is on duty.

He advises to start off light, and do as much of the work as possible in an area where you can reach the bottom of the pool or the wall.

First, reach the 1,000-yard mark. The length of the pool, one lap, is 25 yards, so forty laps equals 1,000 yards. Break it up into 10-lap intervals, and try different styles of swimming, from freestyle, to the backstroke, to the breaststroke.

For an athlete who wants to really get a feel for what water polo players go through, Buckner recommends treading water for up to 10 minutes, with your hands out of the water, then toss around a medicine ball without going down to the bottom of the pool. He does caution not to use a weghted belt – that’s for the pros.