High End Protection Bodyguards are Not to be Fooled With! 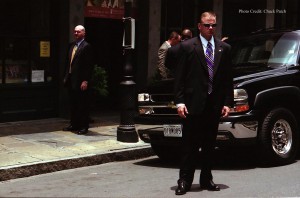 Just about everybody has some type of interest in celebrities, with some being way more than others. Usually the fascination with movie and television stars, musicians, athletes, politicians, and even reality stars is innocent. But for some people, whether they are paparazzi, autograph seekers or even stalkers, it can turn into an obsession, and in extreme cases put their obsession in danger. That’s where bodyguards come into play.

The bodyguard has to be able to take on anything that comes a celebrity’s way, and they have to know how to diffuse a situation rather quickly without any harm to their client or to the public. Many people mistakenly think that bodyguards should be the stereotype of the biggest and baddest. but according to Richard Davis of The Bodyguard Group of Beverly Hills, that is a recipe for trouble.

David points out that you typically do not see obnoxiously huge Secret Servicemen, and they are protecting the leader of the free world. The Bodyguard Group is made up of former U.S. Veterans and Navy SEALs, who aren’t always the biggest but are really the baddest men on the planet.

“The high-end protection work has nothing to do with being big,” Davis said. “It’s speed, strength, stamina and being smart. When people hire people just because they’re big, that’s when they get in trouble.”

Davis is referring to celebrities who have been sued because their bodyguard ended up beating people up. The Bodyguard Group has a perfect record since they were founded 45 years ago. They have never had an injury to a client, or a bodyguard, and there has never been a complaint turned into the Better Business Bureau against them. They have been able to have that type of track record because they hire the best trained operatives in this field. 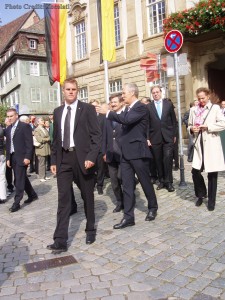 Even though these men are retired from the military, they have not retired from staying in top shape, because they have all continued to physically train to handle any type of threat that is directed at their client. Their training methods are simple.

“You have to workout in the same manner that you are going to work,” Davis said.

The former military men get together on a weekly basis for a training session, where they take turns running real life drills. They put a flag on one person who acts as the client. Typically, they work in groups of two-to-three defending the client against the other operatives, who are acting like paparazzi, autograph seekers, and stalkers. Then they change sides and change drills.

“It’s a tough workout,” Davis said. “You got guys fighting on both sides. It is like playing both offense and defense in football.”

If the operatives on the attacking team are able to grab the client’s flag, then the bodyguards have to drop down and do 100 pushups. If a second flag is taken, then the guards have to carry the client — up stairs, through windows — whatever they can come up with.

Davis’ logic behind this type of training is simple. They could go down to the gym, but the best form of working out is doing exactly what the job is.

“At the end of the day if you’re a boxer you box, if you’re a surfer you surf,” Davis said.

So if you’re ex-military who has fought the fiercest enemies in the world, and now you’re protecting celebrities from their fierce enemies: the public, then you fight each other.

Their training is to build stamina, strength, and more importantly: speed and smarts. 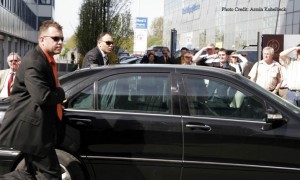 “You can have stamina, strength, but if you don’t have the speed to stop that attack, your job is over in seconds,” Davis said. “Speed is of great importance in the special operative industry. It is the difference between life and death.”

As for being smart, the operatives have to be able to read a situation, and know when to back off. “If you beat up everybody who wants an autograph, you’re not going to have that client anymore,” Davis said.

Ninety-nine percent of the work that they do, Davis cannot disclose because of confidential agreements, such as gun battles and fire fights while protecting clients overseas, which Davis said can “get really hairy at times.” But he did talk about one grueling assignment.

From about 2006-2009, Brittany Spears, Paris Hilton, Lindsey Lohan, and at the time, the little known Kim Kardashian, used to party together. They would hop from one place to another, gathering a larger crowd as they went along. For the operatives, it was 12 hours of pushing people out of the way and making sure that nobody was able to get to close to the celebrities. As grueling as it was, it was probably light duty for them.

With the training that these operatives have, the paparazzi, autograph seekers, and stalkers do not stand much of a chance.

For more information about The Bodyguard Group, visit their website at http://www.thebodyguardgroup.com.