One-on-One With a Mud Run Champ 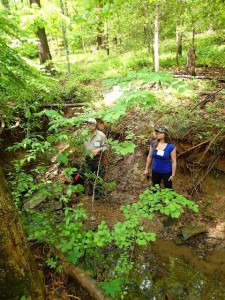 If you haven’t competed in a mud run yet, you probably have a friend who has. The rapid fire of the races is spreading, swallowing athletes whole and spitting them out one by one, a little grittier, a little dirtier, a little tougher than they were before.

ATLX is searching out the toughest athletes in our world – the elite warriors who can hold their heads high as champions of one of the most popular participant sports out there. We’re talking about the winners of mud runs, adventure races, and obstacle courses.

We’ve found a winner who would give any athlete a run for their dirty money. Cynthia Johnson, an Environmental Protection Specialist for the Federal Government in DC by day, said her colleagues joke with her about being “right at home in the mud.” Johnson sat down with ATLX to give us the DL on her mud, guts and glory.

Tell me about your mud running experience. Which races have you participated in, at what levels, and how have you placed? And how the heck did you get into mud runs in the first place? 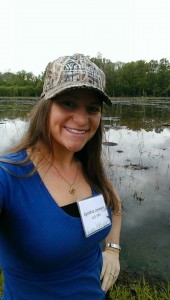 CYNTHIA JOHNSON: I’ve been running OCR (obstacle course races) for a few years now (along with some road races and a duathlon). It all started back in 2011 after I graduated with my masters. I vowed during my time in school that once I graduated, I was going to get serious with fitness. Three weeks after graduation I did the Maryland 2011 Warrior Dash, and that started my love affair with OCR and mud!

In 2011, I was nowhere near placing in any of my races – I was just beginning to learn what it takes to compete in OCR. In 2012, my three biggest accomplishments of the race season were winning $15 for fourth place in a local road race (I’m by no means a road runner so that was amazing to me), completing my first ever Tough Mudder and qualifying for World’s Toughest Mudder 2012, and completing my first ever multisport duathlon (run, bike, run) in fourth place for my age division.

Seriously awesome! Have you always been athletic?

CJ: Before OCR, I was never an athlete. Ever. I’m actually laughing a little as I answer this question.

That’s what’s awesome about this mud run trend – people are discovering the inner athlete they never knew existed. What’s your training like when you’re preparing for a mud run? 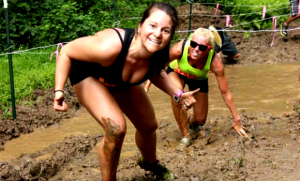 CJ: I train year round, and it’s morphed over the years in order to adapt to the sport. After 2011, I realized being good at OCR meant I needed upper body strength, and a lot of it if I was going to compete solo in elite heats for ranking. I began diligently working to increase my overall body strength, but specifically my upper body strength. My one goal for 2012 was to be able to do an unassisted pull up by September’s Tough Mudder, and I met my goal.

This year, I began a whole new training regimen… doing upper every other day and lower the days in between. This quickly increased my overall body strength even more. Now I’m doing three-day splits. Due to an extremely busy 2013 race season, though, I often find myself only getting to each body part once a week because I always take Thursday and Friday off before a race weekend, which has been almost every weekend. It seems to be working, but I know I can work a lot harder. 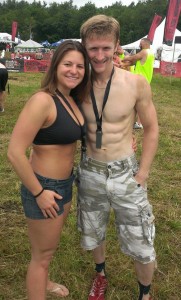 As far as running goes, I run two to three days a week. I have been intensely focusing on hill work lately. I have read many OCR articles on feature athletes, and I have to just say I completely agree with every single one of them – hills are my weakness too!

Hills will definitely do you in if you don’t work them! Do you change your diet at all, in preparation?

CJ: I don’t change my diet for races because I keep a consistent diet year round. I eat a ton of protein (turkey, chicken and salmon mostly) with a large amount of vegetables, a moderate amount of fruit, dairy every morning and healthier-for-you carbs like sweet potato, quinoa or couscous during one meal a day.

I’m a snacker too. I snack all day long it seems – bananas, protein bars, nuts, granola and my little secret Fiber One cookies. I try to keep my metabolism going while satisfying my hunger but not over-indulging by eating every two to three hours.

When you’re training for a mud run, to not only participate, but to win, what are the key things to remember? 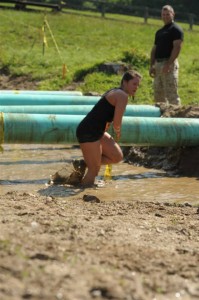 CJ: I used to always think the old saying, “slow and steady wins the race” was so insanely wrong until I started racing. Never go out to beat others, go out to compete against yourself. Many racers will start out the gate super fast, and I always end up passing them later in the course.

Know your body. Find your comfort zone. Push steady until the end.

When I placed first in Hero Rush, I was in second, third and even sixth place at one point. About a mile from the end (of over four miles), I began to slowly pass all the other females because they tired out. I knew this would happen, so I just kept my steady pace, and I kept telling myself I would catch up soon so I wouldn’t start feeling defeated before the race was even over. I ended up finishing minutes ahead of everyone else. Between me and third place was over five minutes!

What’s your advice for people who want to step up their mud run game?

CJ: Find someone who supports you and has the same interest in OCR – be it a friend, a gym buddy or a significant other. I even suggest reaching out to strangers on Facebook in OCR groups. I have met some great people over the years through online groups.

For me, continuing to be disciplined with my diet and training is always easy and natural because Ryan, my boyfriend, also competes in OCR, so he fully understands the commitment. I’m never tempted to stray from my plan because there’s never any temptation around. We motivate each other to be even better, and we often race together, which makes it that much more rewarding.

How did it feel to win in the elite female wave in Hero Rush? 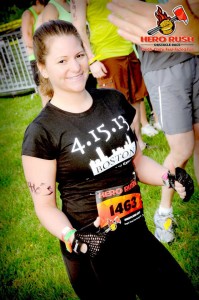 CJ: Unbelievable. Absolutely unbelievable! I had been working so hard to get on a podium, and when I crossed that finish line to being the first female finisher in the elite heat, I did all I could do – I just smiled and laughed. But then I verified it at the results tent before I called Ryan in tears!

How do you stay motivated when, as you mentioned, there are so many incredible OCR athletes out there? And speaking of motivation, what do you tell yourself mid-race to keep yourself going?

CJ: The sense of accomplishment is always the best part of racing, and it is what keeps me going while on the course. There’s nothing more satisfying than overcoming a difficult obstacle course.

I always tell people when I’m asked why I do what I do, “It really sucks on the course sometimes, but that feeling you get when you cross the finish line is so worth it. That’s why I do what I do.” And I think that’s why any athlete competes.

It isn’t easy to train. It isn’t easy to be disciplined with food. It isn’t fun to forego happy hours in order to be at the gym for hours every night – yet, for that feeling of accomplishment, so many of us do it, and we are completely addicted to getting out there on the muddy courses.

2014-11-12
atlx
Share !
Previous: High End Protection Bodyguards are Not to be Fooled With!
Next: Top 5 Fitness Trends of the Last 5 Years