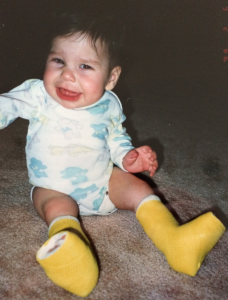 On April 19th, 16-year-old Gabi Ury held the plank position for 1 hour, 20 minutes and five seconds, setting the Guinness World Record for a female. For most of us, holding the plank position for even a minute or two is painful, but Gabi knows a little something about pain, and has been managing it most of her life.

Gabi was born with serious birth abnormalities known in the medical community as VATER syndrome. VATER stands for Vertebrae, Anus, Trachea, Esophagus and Renal (kidneys), and while a child born with VATER syndrome won’t necessarily have defects involving all of these areas, there is typically a cluster of problems involved in those parts of the body. Gabi was affected in her spine, muscles and limbs. She also has severe scoliosis and is missing some of her muscles in her calf, glutes and abs. Over the course of her life, Gabi has undergone 14 major surgeries.

At one point, the family was uncertain whether Gabi would survive past being a toddler. Gabi has always wanted to own a Guinness World Record, to be the best at something. Little did she know, her special needs as a child were training her to break not just a record, but an athletic record. 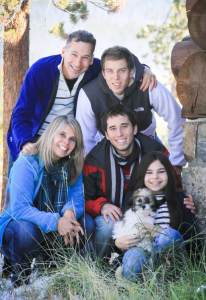 It started during volleyball tryouts. The team was required to run a mile, but without calf muscles, Gabi couldn’t participate. Gabi’s coach suggested that she plank instead. While the other girls were out running the mile, the coach left, and when she came back she was surely surprised to find Gabi still in the plank position.

“[My teacher] came back and I didn’t really know how long it had been, and she told me it had been 12 minutes, and it didn’t feel like it had been. It just felt easy,” Gabi told ATLX.

When Gabi realized that she had this talent, her immediate thoughts were to go after the Guinness record. After some research, she found out she would need to plank for over 40 minutes, a feat she knew she could do.

While most people plank using their abdomen, Gabi’s body forces her to support her weight in her thighs and arms – which actually works to her benefit, as given her lack of calf muscles, she’s been relying on her thighs to walk all her life.

“Every step she takes trains her for this … every step she takes gives her strength because that’s how her body moves,” said Elizabeth Ury, Gabi’s Aunt. “I always tell my friends that haven’t met her that she has Olympic ice skater thighs. Her thighs are so strong.” 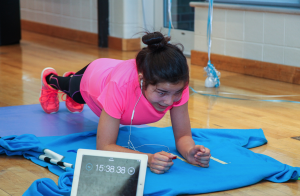 Gabi began training to break the record several months before the big day. It wasn’t just her body that needed to be fine-tuned; her mind needed some training as well. Luckily, perseverance is something that comes pretty naturally to someone who’s overcome all that Gabi has.

“Her normal life gives her that ability, and I don’t think she talks about how much pain she’s able to tolerate,” Gabi’s aunt said.

To break the record, Gabi’s initial plan was to stop at an hour, which would have smashed the original record of 40 minutes. But then, with her big day just around the corner, she discovered that a new record of 1 hour, 5 minutes had been set less than a week earlier and had yet to be certified by Guinness.

Gabi took the news much better than most, considering she would now have to plank some 25 minutes longer than she expected to break the record. She had never gone that long during her training, and while her body structure does, to some degree, work to her advantage, the task is anything but easy. At the 35th minute or her attempt, Gabi began focusing on the pain she was feeling, and her hopes of breaking the record appeared compromised.

“During the actual attempt my arms and thighs were really killing me at a certain point, I think because I wasn’t distracted enough. Once my friends came over and started singing and distracting me, I got over that hill and I was fine,” Gabi said. “But it was mostly a mental game. If I start paying attention to what I’m doing, and I start to realize that a lot of things are hurting, it just gets worse and worse.” 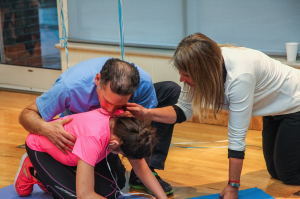 In the end, Gabi did what she has always done: she answered the challenge in front of her, establishing the new, aforementioned Guinness World Record with a time just over 1 hour, 20 minutes — more than 15 minutes longer than was necessary for the record.

It’s fitting that Gabi didn’t stop at the record. You don’t accomplish the things Gabi has accomplished by doing only what you need to get by. You do more. You set a new bar for yourself and everyone around you. Inspired by Gabi’s enthusiasm and commitment to pushing her own limits, Gabi’s mother, Lizanne, and her father William have supported her every step of the way.

“Of course we are mindful of her physical condition, but we are big believers in letting her pursue her dreams and the sports she likes. We treat her as she wants to be treated, which is to be like any other child,” William told ATLX.

“She just loves to play,” Gabi’s Aunt Elizabeth said. “If she wants something she’s not afraid to go for it, which is what I think happened with this record. She has a lot of people that support her going after whatever she wants.”

When Gabi announced that she wanted to break this record, nobody could’ve predicted all the things that were to come. Gabi has since been on Good Morning America, acknowledged by Ellen Degeneres and plenty of other news sources, and recognized in over 140 countries for her efforts. She has also become a mini celebrity in her mother’s home country of Brazil. Fortunately, Gabi speaks Portuguese fluently and can read and understand all of the news written about her.

But probably the biggest accomplishment, aside from the planking itself, is the fact that she raised over $50,000 for the hospital where she spent a large part of her childhood.

“That she was able to accomplish such a difficult physical feat, all the more because of her physical challenges, it was quite incredible,” William said. “We were all surprised by how much she was able to raise for Children’s Hospital, over ten times her initial target. And there was the amazing way the word got out on the web to over 140 countries.”

For more information on Gabi Ury, visit her website at www.gabiplanks.com

Donations for Children Hospital can be made here.

Update: Gabi was asked to speak at Tedtalks in San Diego after breaking the world record, view the video below.