Marathon Pacing a Win-Win for All Runners 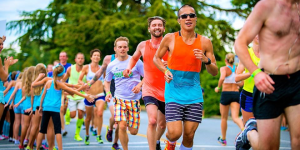 Dave Coligado runs for other people, and in doing so, he runs for himself. He’s a  pacer, running marathons and half marathons next to someone else, ensuring that that person hits their goal finish time. If you’ve been to a marathon, you’ve seen pacers before. They’re the ones carrying a stick with a certain time written on it. Anyone wanting to hit that target time can run alongside them. Doing this for both groups and for one runner at a time, Dave has completed 32 full-marathons, two half-marathons, six ultra-marathons, and one 5k.

So as I caught up with Dave as he was about to board his 7 p.m. flight out of New York headed back home to Chicago, it was no surprise that he was still coming down from a runner’s high.

“I ran the Brooklyn bridge this morning for the first time in my life, a 9.5-mile loop from my hotel near Central Park before my meeting….the view was amazing!”

I could hear the joy in his voice and picture the smile on his tan, lean face.

The fact that he got up at O-dark-thirty in New York City to run before a client meeting, again, does not surprise me. I first met Dave, who travels often for work with Dell Computers, at the beginning of 2013 at 5:45 a.m., when he was on business in San Diego looking for people to run with. The local lululemon store sent him to me, a leisurely marathoner.  A few minutes into our conversation I mentioned hopes of a 2014 Boston Marathon entry.

A grinning Dave perked up. “I can totally help you qualify! I can pace you in your training!”  He was serious. Who was this guy? He had known me five minutes, and he already wanted to help me run a Boston Qualifying time by helping me train? Insta-friend.

I saw this guy who was so passionate about running, who was in great shape, and figured that he’d been running all his life. I thought he was one of those lucky, born-to-be-a runner types. But I was wrong. In 2004, Dave, at age 24, weighed in at 305 lbs and never went anywhere without a pack of Marlboro reds. He was a self-starter, making small life changes by jog-walking. By 2007, weighing around 230, Dave still didn’t love running. Sort of hated it, in fact. But he liked listening to his iPod, and then he saw a flyer for a 5k that had beer at the end. Sold.

Though not excited, Dave and a friend did the Nike Rock’ N Run in 2007.  Nervous, he did shockingly great, 22:19 with an average pace of 7:10 per mile. Not bad for a smoker!  Working for Dell in 2008, Dave had an important client who was a runner, and in order to get in good with him he would join with him for a jog at lunch, running up to five or six miles twice a week.

“Really, I ran to kiss his you-know-what,” Dave laughs. “I wanted the face time.”

But Dave’s running was about to take on a much more important meaning in his life. After running the Brooklyn half-marathon (his first half ever) in an impressive time of 1:39.00, Dave, in 2008, found out that his brother had been paralyzed in a car accident with a driver who was texting. Just two days later, his father was hospitalized with a brain tumor following a stroke. By his side on Oct. 13 (he remembers the day exactly), Dave’s dad, while watching TV, said, “I’ve always wanted to run a marathon.”

That was the day Dave decided two things: He would quit smoking, and he would run, and finish, a 50k ultra-marathon that was less than three weeks away. The farthest he’d ever run was 13.1 miles. In his own words, Dave had “no business running that race.” But he wasn’t running for himself anymore. He was running for someone else. On Nov. 2, Dave finished the 50k. On Nov. 3, he gave his dad the medal. 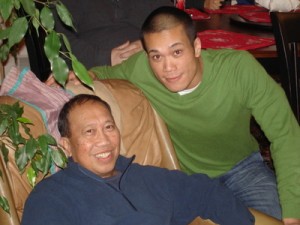 November 5th, two days after handing him my medal, my dad passed away,” Dave recalls. “And at that point, running was not about losing weight. It was about overcoming things as hurtful as losing my dad, getting through a distance I never thought possible. I love helping others through the most difficult times of a marathon to experience the joy I felt (and continue to feel through running).”

Moving forward, Dave committed to running one marathon a month, raising money for the Lance Armstrong Foundation. The first marathon in Miami took him 4:10:00, and 13 marathons and one ultra-marathon later, in the fall of 2009, he ran the Chicago Marathon in 3:20:00, almost an hour faster than his first.

Dave, now 37, has given back to the sport of running by starting a free run club as an Ambassador for lululemon in his Chicago suburb. Still going strong, three days a week, anyone can come along. Starting with just a few runners in 2011, Dave now has some 95 people enjoying run club, 50 of whom completed the 2013 Chicago Marathon in October.

“Running long distances like a marathon sounds unfathomable to people,” Dave says. “It’s about overcoming the impossible and finishing. Runners know it’s about overcoming that voice that says to stop. When I see someone’s face wanting to quit, between miles 20 and 25, get all the way to the finish line, it’s incredible to see their smile! They had it in them the whole time; it was only doubt talking.”

It’s mental,” Dave says. “You get to grind with someone through a tough time and by the end of 26.2 miles you share a bond… a friendship. If I believe they can, they believe they can and they do. We all need a little help sometimes.”

Taking on this type of a marathon time is no joke. Pacing Hillary Cavan to a time of 3:50:44 at the 2012 Bank of America Chicago, more than 25 minutes faster than her 2008 time, he broke down the last four miles one minute at a time. “One more minute, now just one more minute,” he kept telling her, much like he did for Tess Rafferty, who cut some 20 minutes off her time.

Once a year, Dave runs a marathon for himself, because he has goals of his own, as well. In May 2013, at the New Jersey Marathon, he missed the Boston Qualifying time by only 51 seconds — heartbreakingly close for a runner. But he gave it another try at September’s Lehigh Valley marathon, where he qualified for Boston 2014 by nailing a BQ time of his own: 3:07:00.

When I first met Dave, he said he would help me train to qualify for the Boston Marathon … and I did it! I ran a 3:27:00 in Carlsbad, Calif. in hilly, rainy conditions, but I know I can do better. I want to go under 3:20:00 in Boston. So to Dave, thanks for helping me get to my goal. Maybe I’ll even follow you in Boston. Either way, I’ll see you there, friend.