America is said to be the land of opportunity, the place where hard work can result in the achievement of your life’s goals. One of the exceptions to this rule, however, might be soccer. If your goal is to become a professional soccer player, well, America probably isn’t the best place to make that happen.

When Juan Guerra, a current midfielder for Carabobo FC in Valencia, Venezuela, was growing up in Caracas, Venezuela, he wanted two things for himself: to ultimately go to college and further his education, and to become a professional soccer player. He didn’t know that one could come at the expense of the other. In Venezuela, and in many countries around the world, guys are training and playing professionally as early as 15 years old. They’re on a track specifically designed to lead them to a professional career. They train all day every day, working on their skills, playing against the best competition. Soccer is life. 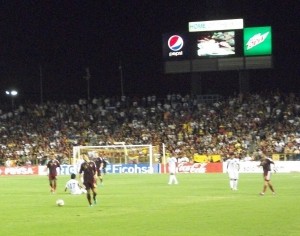 But in America, soccer isn’t life. Not even close. When Juan’s family moved to Miami to afford him and his brother more opportunity, namely in the form of their educations, the chance to play soccer at the highest level was put on hold. Juan eventually attended and played soccer at Florida International University, where he was not only playing with and against marginally talented players, but also, he and his teammates were restricted by the NCAA rule that only allows a team 20 hours per week for practice.

“College players are at a disadvantage from the rest of the world because of NCAA compliance rules. It is hard to develop to your best potential on a college team,” said Guerra. “When I started playing professionally, I noticed the difference right away. Caracas FC had guys that were my age, but had been playing professionally for five years.”

In recent years, with the creation and tepid growth of Major League Soccer, there has certainly been an effort to strengthen American soccer. David Beckham, perhaps the most recognizable and marketable player on the planet, was paid more than $200 million to come play for the LA Galaxy and promote the sport as a whole, and in some places the game has actually found more than a niche following.

The MLS’s Seattle Sounders, for example, averaged over 44,000 fans this past season, which is a greater draw than every Major League Baseball team save for the Dodgers. The Sounders were featured on HBO’s Real Sports for their aggressive and innovative ownership and the rabid fan base they have fostered. But the Sounders, and the overall enthusiasm for professional soccer in Seattle, is clearly the exception to the rule. 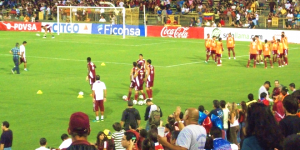 You could debate until you’re blue in the face why soccer has never really caught on in America, but certainly one of the most important factors is our lack of developmental programs that model the feeder systems of other major leagues around the world. What developmental leagues we do have aren’t directly affiliated with MLS. We aren’t developing, and ultimately feeding our young talent to the professional ranks in the way that Spain or England or Juan’s home country Venezuela does. It’s not that we don’t have the talent. Surely a young LeBron James would’ve made a pretty good midfielder. But our best young athletes gravitate to the sports we support, the sports we cheer for, the sports for which we have created AAU and scout teams to foster player development and exposure.

And of course, there is absolutely zero financial incentive for a young LeBron James to choose soccer. The average salary of an NBA player is more than $5 million, while the average MLS player makes less than $150,000 – and even that number is inflated by a few MLS players who are making huge money compared to the other players in the league. When the MLS Players Union released its updated salary information up to Aug. 1 of this year, there were 61 players making less than $36,000 a year.

The low salaries stem from a couple factors, one of which is the MLS rule that only allows a team three contracts that don’t count against the salary cap. But most importantly, the revenue just isn’t there. Soccer, much like hockey, is pretty widely accepted as a very non-TV friendly game. Scoring is scarce, making an appreciation for the game’s nuances paramount. And again, soccer just isn’t our sport. Plenty of Americans don’t even understand the rules, let alone the intricacies of field spacing or the orchestration behind a centered pass.

Like comedian Daniel Tosh said, “Excuse me for not getting revved up about a corner kick that never works. Hooray, the game ends without a single goal! I want to kill myself when an NBA team doesn’t break 100.”

“But,” he adds, “I’m sure I would have developed a lot faster at the pro level (had I taken another route).”

Perhaps, one day, this won’t be the case. Like we said, Major League Soccer is growing, albeit pretty slowly, and in time that may lead to better developmental programs, and ultimately, to more national interest. But for now, if players like Juan Guerra choose to spend their developmental years in America, their growth as players will almost surely be stunted. And there is no clear answer as to when, or if, that will ever change.

development NCAA soccer 2015-01-20
atlx
Share !
Previous: Marathon Pacing a Win-Win for All Runners
Next: YouTube is the New Personal Trainer!