A Trainer, a Marine, & a Fitness-Forged Family

It takes a lot to keep up with Chris Gideon. He’s a marine who’s been deployed to Afghanistan nine times. If anyone can do it, it’s his wife, Valli, who put together the first-ever indoor triathlon at the YMCA in Mission Viejo, Ca. and also beat cancer. Together, they’ve fought and won many battles. They’ve helped change lives literally all over the world. Starting with their own.

Valli and Chris first crossed paths at a bar when Chris was stationed outside of Camp Pendleton in 1992. By 1995 they were married. As military families do, they’ve bounced all over the country. Valli has waited for many calls for many years just to hear that her husband is safe. She likes it better when he’s home, surely, but she can handle herself. In was in the early 90s that Valli, a longtime distance runner, introduced Chris, a former college football player, to distance running, and they’ve been at it ever since. Training, in so many ways, is at the core of who they both are.

In 1999, they again moved back to California. That’s when Valli interviewed for the Director of Health and Fitness position at the Mission Viejo YMCA, pitching, as a sort of “hire me” ploy, the aforementioned indoor triathlon training program.

“I got the job, and after a few weeks…my new boss inquired about that indoor tri program,” Valli laughs. “I realized, ‘shoot, I really have to do this.’”

Valli is a natural coach, a competitive athlete. Along with some help from her tri-club friends, she launched the seven-week training program. Indoor-tri training was less intimidating to first timers. Using spin bikes, the pool, and a two-mile outdoor trail run, it was a huge success. She continued growing it for the next four years and made it into a nine-week program.

Then they were on the road again. In 2003 they headed to Cleveland, where the YMCA Mission Viejo continued the program for four years.  It’s challenging for her, as a coach and founder who is so invested in the program she’s poured her heart into, having to leave it.  But Chris is committed to the Marines, and Valli is committed to Chris.

“You enable mentors to coach, to feel the pulse of the group, and to make decisions,” Valli says. 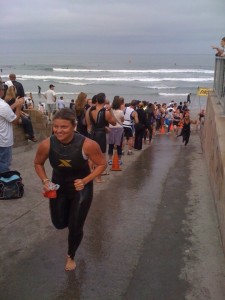 Bouncing back to California in 2007, the program was made into an endurance sports training program called  Train Like You Mean It (TLYMI), and it helped over 400 people reach race finish lines.

This past January, the Gideon family had move to move to Florida and the commute was just too much, so Valli formally passed the baton of TLYMI. She may not physically be overseeing TLYMI anymore, but the lives she has touched remain changed.

“I know they understand that training and racing is not about a time,” she says.  “It’s about having the dedication to do a life-changing journey, and create fellowship, so that members are so fulfilled and accomplished that they recruit new members.”

With Valentines Day upon us, it’s clear that Chris and Valli are such a true love story; the female athlete, the coach, the program director who lived on her own while Chris was “war organizing” in far-off, highly dangerous places. It takes a strong man to do what Chris does, and it takes a strong woman to hold down the fort back home with two kids. It never gets any easier, but that has never stopped these two.

“Any athletic  endurance challenge is easier than having your husband in harm’s way and gone for so long,” Valli says.

In 2002, having been gone for 4 ½ months in the middle of heavy war action, he was able to plan a surprise homecoming at the Newport Beach triathlon, in which Valli was competing. On Sunday, May 12th, as Valli she swam, biked, and ran her way through the Newport triathlon, Chris was working his way to the finish line in the same uniform he’d been wearing for the past three weeks. Little did Valli know the cheers at the finish were not for her finish, but the fact that she was about to be embraced by her husband she had not seen in months.  The Gideons were definitely a crowd favorite that day.

“I lived the triathlon life, and having my son Battle put me in check with what’s important.”

Battle, now nine years old, was born partially deaf, and Valli knew very little of living with deafness, so it became her responsibility to make sure he had the tools to overcome and live to his full potential.  Her daughter, Harper, was born 21 months later with the same condition. Both children have intensified her appreciation for how sports create a positive community that inspires special bonds and friendships. Both natural overachievers, Valli and Chris believe in setting the bar high for both Battle and Harper, and their children always rise to that challenge. 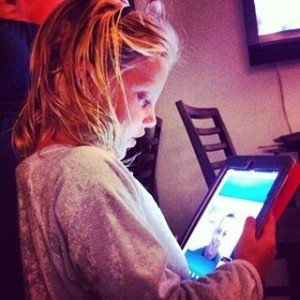 “We don’t ever say (Battle and Harper are doing great) compared to other hearing impaired children,” Valli says. “They are just great!”

Valli, as mentioned earlier, had a pretty big battle of her own to deal with. She doesn’t talk about it much. Somewhere in the middle of talking about all the other things she’s proud of, her family and her children and the lives she’s impacted, she nonchalantly throws in that March of this year will be the two-year anniversary of her having her thyroid removed after being diagnosed with thyroid cancer. “Oh, that little thing?” she jokes. Having had to cope with your husband being gone for months at a time, undeniably in harms way, now that’s tough. Cancer? Meh.

Valli says that as a military wife who has moved many times, she’s learned that the friendships and relationships she has made through fitness are far stronger than any amount of miles that may sit between. She’s still holding out on starting a coaching program in Florida, depending on Chris’ job and his projected return in April. But rest assured, it won’t be long until she’s back to inspiring through fitness. It’s what she does. In the meantime, though she’ll be spending her Valentines Day apart from her husband, she’s just a quick FaceTime session away from seeing Chris’ face.

“That feeling trumps a tri podium finish any day,” Valli says. “Holiday or not.”