Gretchen Reynolds, the author of “The First 20 Minutes” and “Phys Ed” columnist for The New York Times, has been 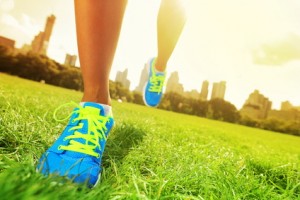 immersed in exercise science in both her writing and personal life. A former mountain biker and diligent runner, Reynolds practices what she preaches, even if what she preaches goes against everything we have ever learned about fitness and training.

Reynolds chatted with ATLX about her findings in “The First 20 Minutes,” which was recently released in paperback.

In “The First 20 Minutes,” Reynolds dispels many myths about training that surprised even her. People find it especially frustrating when it seems like there is new evidence suggesting different facts about health and fitness every day.

“One of the things that science is proving is how little we know,” Reynolds said.

Technology has provided scientists with a better understanding of the complexities of the human body, Reynolds explained. Before this technology existed, fitness information was essentially anecdotal. Unfortunately, things that would work well for a few people would be generalized for an entire population. Now there are statistics that tell us otherwise.

That doesn’t mean that we are at a point where we know everything.

“In this field the foundational research is holding up,” Reynolds said. “But a lot of aspects of it are changing [and] are in question as our understanding is becoming more sophisticated.”

On the growing interest of the fitness lifestyle

More than 50 million people in the U.S. have gym memberships, and even more are living active lifestyles. Unfortunately, the number of active Americans is less than 10 percent of the population, but Reynolds notes that the interest is certainly there.

“A lot of people who are overweight don’t want to be and are hoping to find a way to be healthier,” Reynolds said. “It doesn’t mean they will follow through, but a lot of people want to exercise and be more fit and don’t manage to do it. I understand that, too. It’s hard to find the time and the motivation.”

On people who hate exercise

While time and motivation are factors, a lot of people just don’t like training in general. Reynolds has an answer for that.

“I do think it’s a good time to own a body, because we are learning a lot more,” Reynolds says. “There are very easy ways to make yourself healthier. You don’t have to exercise. If you hate that word then call it gardening.”

The point that Reynolds reiterates throughout her book is that it’s really important to just move around. You don’t have to exercise per se. The science that suggests that simply moving around more is almost more important than actual exercise was really one of the biggest surprises for Reynolds herself and led to a revolution in her lifestyle. She uses the phrase “active coach potato” to describe the lifestyle she previously led of running five miles and then sitting at her desk or on the couch the rest of the day.

Many people undercompensate their lifestyle when they exercise, and Reynolds admits she was previously guilty of this as well. She changed her lifestyle, made sure not to sit all day and has seen the positive impacts on her health.

“I’m actually standing right now with my laptop on a stack of dictionaries,” Reynolds said.

Reynolds admits that part of the frustration of consumers comes from journalists who may write very narrow pieces or write pieces that are sponsored by the companies that would benefit from the study.

“There is definitely a battle when it comes to hydration, and it’s a battle with very high stakes,” Reynolds said. “If you start telling athletes that they don’t need Gatorade, you will have people coming out of the woodwork telling you you’re wrong.”

In all of her articles, Reynolds stands behind the fact that her information comes from peer-reviewed journals, so essentially you can argue with the science, but not with her methods of reporting it. Show her the same results without having Gatorade funding it, and she’ll be happy to research it and report it. But most of the time, companies or people can’t do that.

On the backlash against her book

Reynolds certainly hasn’t had all positive feedback about her book, especially since a lot of her information goes against what some people think they know about fitness and training. Telling people that eight glasses of water may be overkill or that they don’t need to stretch has provided her with plenty of negative feedback and hate mail. People have even stopped her in the street to argue with her about her concepts on stretching.

“People are incredibly passionate about it,” she said.

She also went on to clarify that she can’t say one thing is true for every single person. Since there are outliers in every study, there is no way to know for sure that stretching is counterproductive for every single person, but Reynolds cautions that many people don’t stop and think about why they started doing it in the first place.

“I hope that people will stop and think, ‘Well, why do I do that?’ And if you choose to disagree with the science that’s fine, but at least you’ve actually questioned the basis of why you think that, which is often because your sixth grade PE teacher told you to.”

That, of course, is not to say if you enjoy it and it feels good to stretch and you haven’t sustained injuries from it then you should go ahead of stretch, even though the American College of Sports Medicine advises against it. Regardless, if it’s something you enjoy, then Reynolds isn’t telling you, you have to stop.

“If you want to keep it up, that’s fine,” Reynolds said. “But at least you’re doing it as a choice and not as a mandate.”

2015-02-24
atlx
Share !
Previous: Nutritional Tips Leading Into Marathon
Next: Why Do You Race?