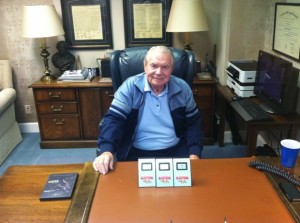 How is it possible that one man could organize a competitive women’s track team during the Cold War, work as a FBI agent and build the Arnold Sports Festival – the largest multi-sport festival in the U.S. – and then expand it globally? Well, we’re still trying to figure that one out. Jim Lorimer at 86 years old has literally done it all and is still doing it from his office in Worthington, Ohio. If he’s ever even considered retirement, he’s never told us.

Lorimer had dreams of being an FBI agent from an early age. It’s not unusual for kids to have dreams of being an agent, but Lorimer pursued it by writing a letter at 13 years old to FBI Director J. Edgar Hoover. Lorimer received a personal response from Hoover letting Lorimer know that he needed to go to law school to become an agent. Lorimer received his law degree from what is now known as Penn State Law School and was accepted into the FBI in 1951. His assignment was to monitor communists and members of hate groups during the Cold War.

Up until 1952, the Soviets didn’t have an Olympic team, but they arrived on the scene fast and furiously. Excelling especially in track and field, the Soviets soon dominated the sport, garnering both Soviet and Communist pride in the process.

In 1959, Lorimer had retired from the FBI, but a casual interest still lingered. The United States and Soviet Union were matched to go head-to-head at Franklin Field in Philadelphia and the event piqued Lorimer’s interest. While the American men beat the Soviet men, the American women, untrained and underprepared, didn’t stand a chance.

“I saw a U.S. girl in the international competition in 1959 was using the scissors to high jump. As a consequence, the Russian girl had jumped a full foot higher,” Lorimer said. “The Russian girls were just absolutely slaughtering the U.S. girls. And the reason was the U.S. girls had no training, no base. They didn’t have a chance.”

On Lorimer’s way back to Worthington, Ohio, where he was then working for Nationwide Insurance, Lorimer knew that American women were capable of competing against the Soviets. Not only was it embarrassing for Americans to be beaten so badly, but it had much larger international implications with regard to perceptions of the Soviets’ overall superiority.

Lorimer got back to Columbus and asked some local coaches to identify the best 14 girls in the area in track and field. He scouted local events and networked in the community, telling them his idea and its importance. He received positive feedback and the names of some talented young ladies to be a part of his Olympic development program. One by one, he called the parents of the young women on the list. “They were really good, and yet they had no chance to give expression to who they really were, which was really very strong competitors,” Lorimer said. “And so without exception, all these girls wanted to be together and be part of this Olympic development program.”

Lorimer received approval from then-Ohio State Athletic Director Dick Larkins to use the school’s athletic training facilities. Lorimer trained the girls and then entered them into indoor track events throughout the Midwest and East Coast.

In 1960, the Olympic trials were being held in Corpus Christi, Texas, and Lorimer knew he wanted to make an entrance with his competitors. His current employer, Nationwide (yes…he was still working a full-time job), caught wind of what he was doing and offered the corporate jet to take the women to the Olympic trials. Although the women didn’t win, the concept of women training and competing served as a precursor to Title IX and women’s empowerment throughout the United States. And this was just the beginning for Lorimer. 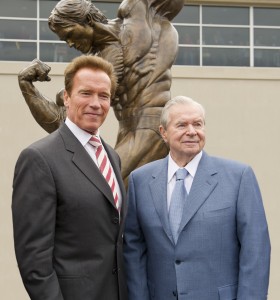 One thing led to another. “And the next year, listen to this one, I ran the National Championships for Track and Field,” Lorimer said. “In 1964, they made me Chairman of the United States Olympic Committee for Women’s Track and Field.”

Word had spread about Lorimer’s incredible sports promotion capabilities. Lorimer, who always had an affinity for weightlifting, was offered the opportunity to run the National Championships in Weightlifting and gladly accepted.

Lorimer knew that the World Weightlifting Championships needed a main event for it to be financially viable.

“I said, ‘You’re going to lose your shirt if you have just that,’” Lorimer said. “’The only way you can make it financially viable is with a ‘Mr. Contest.’ ‘Well, what do you want to call it?’ I said, ‘Well, I just picked a name. Let’s call it Mr. World.’”

Lorimer proceeded to call ABC’s “Wide World of Sports” in New York to give them the exclusive opportunity to cover the Mr. World Contest, and for the first time, the network covered weightlifting and bodybuilding.

Lorimer also knew he needed a celebrity of sorts to really make the event come alive, and invited Austrian bodybuilder Arnold Schwarzenegger to compete in the event. “I was working out at Gold’s gym when I got a call from Jim, and I didn’t know who Jim Lorimer was,” Schwarzenegger said during an interview for the Ohio Channel.

After both winning and seeing the success of the show, Schwarzenegger made a promise – which at the time Lorimer shrugged off – that when he was done competing he would partner with Lorimer to create a bodybuilding event to be hosted annually in Columbus, Ohio.

“Not only did I think it was the greatest competition I ever entered because I won, but also because it was so well organized and we were treated so unbelievably well,” Schwarzenegger said.

Surprising even to Lorimer, Schwarzenegger made good on his promise when he retired from bodybuilding in 1975.

Even though attorneys often generate volumes of legal documents, that’s not how Lorimer did business with Schwarzenegger. “[We partnered] on a handshake in 1975,” said Lorimer. “We’ve never had anything but a handshake.”

And the Rest is History

Ever wondered how Schwarzenegger got into politics? Thank Lorimer for that, as well. As the Vice President of Government Relations, Lorimer was very involved with the government. Lorimer knew that Ohio was a pivotal state for the 1988 election, and so Lorimer invited then-Vice President George H.W. Bush, who was running for the presidency he later won, to speak at Nationwide the Fridaybefore the election. 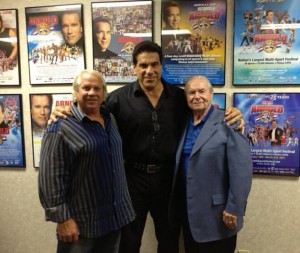 capital city to hear the candidate speak. However, some may have been there because Lorimer had “The Terminator” Arnold Schwarzenegger there to introduce him. Bush was so impressed with Schwarzenegger he invited him on the jet.

“They discussed that if he became president whether Arnold would like to become Chairman of the Council of Physical Fitness and Sports. Arnold said that he would. So Bush won and Bush immediately appointed Arnold chairman,” Lorimer said. “Of course chairman Arnold put me on the committee, too. A few months after that, Arnold had me in the Oval Office with Bush.”

Schwarzenegger and Lorimer’s friendship has only continued to grow over the years. “Jim was one of the most wonderful and important, not only partners, but also friends of mine. There is absolutely nothing that I could not discuss with him,” Schwarzenegger said.

Schwarzenegger admits to consulting Lorimer on taking the role of the Terminator, his engagement to Maria Shriver, to running for governor, and many other important life decisions for the former Governor of California.

Together Lorimer and Schwarzenegger continue to grow the largest multi-sport event anywhere in the world, hosted annually in Columbus, Ohio, Madrid, Spain and Sao Paolo, Brazil. Lorimer’s sights don’t end there, however. His ultimate goal is to have the Arnold Sports Festival on every continent on the planet.

And based on his track record, there is no doubt he will do it.