A lot of people like to get outside of the gym for their fitness activities. Usually that means hitting up the local park, finding a bike trail, running up some hills, training at the beach or completing some other outdoor activity that’s close to home. But for Marcia Lynn, that means getting out the passport, and she doesn’t have to dust off because she uses it all the time. 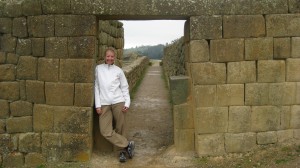 When Lynn gets out of town, she really gets out, and she isn’t taking leisure trips- she’s always looking for an adventure. She has been to every continent in the world, and when she travels she’s looking to stay active. She normally rents a kayak, canoe, bike, or whatever the form of transportation that is common in the country that she’s visiting. She has kayaked in both the Arctic Ocean and Antarctica, and she has sat with the same silverback gorillas in Rwanda that famed zoologist Dian Fossey studied, which inspired the movie Gorillas in the Mist. She travels the world seeking adventures for a simple reason.

“It’s my need to explore the world. To see what’s out there, the cultural aspects,” Lynn said.

Lynn was born and raised in Chicago, where she had an extremely active childhood in the 1960s. Her father, who was a World War II veteran, played baseball and basketball during his childhood, and her mother played tennis. Her parents had her play a variety of sports from softball to tennis to swimming, and she ice skated often in the winter months. She skated at Waveland Park near the Kwagulth Totem Pole, right off of Lake Michigan. Park officials would flood an area in the winter and let people ice skate outdoors, and many 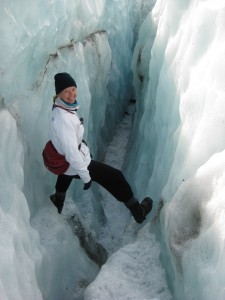 people were able to skate in their backyards.

As a child Lynn either walked, ran or rode her bike everywhere, which did not change much when she became an adult, as she did not own a car until she was 32 years old. Being in the great outdoors has always been a big part of her life, as she worked for the U.S. Forest Service and the U.S. Geological Survey to help pay her way through college. She graduated with a Fine Arts degree from Humboldt State University located on the edge of the Redwood Forest in California.

Lynn resides in Ridgecrest, Calif., which is surrounded by four mountain ranges. The Sierra Nevada, Cosos, Argus Range, and the El Paso Mountains. It is also near the China Lake Naval Air Weapons base- the largest single landholding of the Navy. Canyons and lakes are in the area suiting her lifestyle perfectly, as she fell in love with the great outdoors as a child. One of her favorite activities is cross country.

Lynn has become a pretty good photographer, but she’s not looking to take great photos around her town. She looks to get off the beaten path to find great images. You cannot drive to many of the locations where she is looking to take pictures. You also cannot be out of shape.

“To get to places where you can’t normally get to, you have to be physically fit to get a picture,” Lynn said. “You have to cross country ski or ride a bike or you have to walk or hike.” 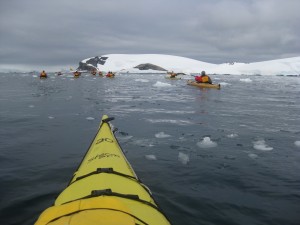 “To be honest, I fell out of the raft two or three times while training, so I wasn’t sure if this was going to be a go,” Lynn laughed. “A friend of mine told me not to worry about it, that by the end of the summer I’d be jumping in and out of the rapids, and she was right.”

Lynn takes advantage of her surrounding areas, but she does not limit herself to the natural settings of California. She has kayaked the only navigable river in the Polynesian islands. She camped in Kenya, Uganda and Rwanda. She has floated past glaciers near the North and South Poles. She does all this because she does not want to settle for Internet searches or books to experience a far-off land. 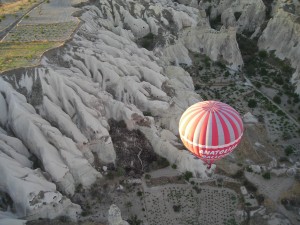 Lynn is working on several new adventures. She wants to circumnavigate the world, and visit all of the locations where her father was stationed during World War II. She’s making up for lost time, because her father did not have much interest in backpacking when she was younger.

“He said that he had camped for five years, so he had no desire to do that again. I think he ate out of his helmet enough,” Lynn laughed.

One way that Lynn stays in shape for all of these activities is with Zumba. She has become an instructor in Ridgecrest, because the person who taught the class before was going to be transferred to another Navy base. She had never done Zumba when a local resident asked her to take over the class. Not long after that, Lynn introduced it to the Sierra Sands Unified School District, where it is taught to students. 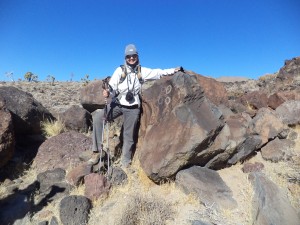 Lynn has a way of keeping things simple, which may be one of the many reasons why she gets out so much.

“I always kind of thought that if we had roots like a tree, then we’d be in one place. But we don’t, so keep moving,” Lynn said.

Lynn is not close to slowing down, and she surely is making the most of her life and the most of the world. She is a true globetrotter.